Tou Thao, J. Alexander Kueng and Thomas K. Lane—the three former Minneapolis police officers who stood by as Floyd died—were charged with aiding and abetting murder in the second degree. Ellison said arrest warrants were issued for all three men Wednesday. The three men were fired shortly after the May 25 incident captured on video, but until now have not faced criminal charges, which come after more than a week of tense nationwide protests against institutional racism and police brutality, which called for their arrest and justice for 46-year-old Floyd.

“I strongly believe that these developments are in the interest of justice for Mr. Floyd, his family, our community and our state,” Ellison said while announcing the charges during a Wednesday afternoon press conference.

Ellison noted the gravity of the case before announcing the new and upgraded charges against the four former officers, and its swift impact worldwide. He also warned that the case will likely take months to complete.

“George Floyd mattered. He was loved. His family was important. His life had value and we will seek justice for him and for you and we will fight. The very fact that we have filed these charges means that we believe in them. But what I cannot believe is that one successful prosecution can rectify the hurt and loss that so many people feel,” he said. “The solution to that will be the slow and difficult work of constructing justice and fairness in our society. That work is the work of all of us. We don’t need to wait for the resolution and investigation of this case to start that work.”

He also touched on the symbolic nature of the case in his closing remarks during a question and answer session with reporters, and specifically addressed the anger and mistrust surrounding police brutality.

“Our country has under-prosecuted these matters in Minnesota and throughout the country and so I think the trust is a result of historically not holding people who are public guardians accountable for their behavior in situations where they should have. That I think is the origin of the trust problem. We can’t control the past. All we can do is to take the case that we have in front of us right now and do our good faith best to bring justice to the situation and we will.”

Ellison said his message for protesters who may be disappointed Chauvin is not facing a first-degree murder charge is that he pledges to hold “everyone accountable for the behavior we can prove in a court: “If I don’t charge it it means we did not have the facts to do that.”

Wednesday’s news was a “bittersweet moment” for Floyd’s family, according to a tweet from their attorney, Benjamin Crump.

Floyd’s family demanded the arrest of all four police officers in connection to his death earlier Wednesday while they visited a memorial created on the street corner where Floyd was killed, the Associated Press reported.

Crump’s tweet on Wednesday afternoon noted that the family was “deeply gratified” about Ellison’s “decisive action.” Crump and the family said in a statement that Elllison told them his office will continue investigating and “upgrade the charges to first-degree murder if the evidence supports it.”

Floyd’s family had previously said they were not happy with Chauvin facing third-degree murder charges and asked that he instead be charged with first-degree murder.

The Legal Rights Center and the American Civil Liberties Union of Minnesota also issued a statement over the weekend arguing that third-degree murder charges were not enough as they “may prove to be legally defective and allow Chauvin to evade the punishment warranted for his actions.”

U.S. Sen. Amy Klobuchar called the new charges “another important step for justice.” Minnesota Gov. Walz agreed and added “we must also recognize that the anguish driving protests around the world is about more than one tragic incident.” U.S. Rep. Ilhan Omar saw the new developments as “overdue but necessary justice.”

Floyd was killed during an arrest over allegedly using a fraudulent $20 bill at a grocery store. Video footage shows Floyd was held face-down, with his hands cuffed behind his back and with Chauvin’s knee weighing down on his neck, as he repeatedly gasped “I can’t breathe.” In the video, Thao can also be seen watching the incident and not responding to bystanders’ concerns that Floyd was in danger.

Thao and Chauvin both have a history of complaints made against them while working for law enforcement. (Chauvin racked up more than 15 conduct complaints in his 19 years with the police agency, while Thao had six conduct complaints filed against him, according to the Minnesota Star-Tribune.)

Minneapolis Police Chief Medaria Arradondo said Sunday that he believes “silence and inaction” from the other three ex-officers made them “complicit” in Floyd’s death.

Arradondo was responding to a question from the Floyd family, relayed Sunday through a CNN correspondent. Floyd’s brother, Philonise Floyd, asked about the police chief’s thoughts on whether all four former officers should be arrested and convicted.

“Being silent or not intervening— to me, you’re complicit,” Arradondo said. “My decision to fire all four officers was not based on some sort of hierarchy.” He added, “I don’t see a difference in terms of the ultimate outcome as he is not here with us.”

Arradondo said he expected his officers to hold themselves to a higher standard. “If there were one solitary voice that would have intervened and acted —that’s what I would have hoped for.”

The attorney representing the Floyd family said Monday that the results of an independent autopsy “determined that asphyxiation from sustained pressure was the cause of death.” The manner of death was “homicide caused by asphyxia due to neck and back compression that led to a lack of blood flow to the brain,” the statement said, adding that doctors concluded from evidence that Floyd died at the scene.

An official preliminary autopsy report showed that there were “no physical findings that support a diagnosis of traumatic asphyxia or strangulation,” according to prosecutors. The report instead blamed a variety of factors, saying the “combined effect of Floyd being restrained by the police, his underlying health conditions, and any potential intoxicants in his system likely contributed to his death.”

Prosecutors contend in the official criminal complaint, released last Friday, that after officers arrived on the scene they learned Floyd was parked in a car around the corner from the store that called the police over a counterfeit bill.

Police officers Kueng and Lane approached the car, documents say. Lane “began speaking with Mr. Floyd,” “he pulled his gun out and pointed it at Mr. Floyd’s open window and directed Mr. Floyd to show his hands,” after which he “put his gun back in its holster.” Then, Lane allegedly ordered Floyd out of the car and pulled him out of the vehicle, before handcuffing him despite Floyd’s resistance.

Lane explained to Floyd that he was being arrested for “passing counterfeit currency” and as the duo tried to walk him to their squad car, Floyd “stiffened up, fell to the ground and told the officers he was claustrophobic.”

Then, Chauvin and Thoa arrived in another police car.

Together, the officers struggled as they “made several attempts” to get Floyd in the backseat of the police car. Floyd began repeating that he could not breathe. Chauvin allegedly tried to get Floyd into the car from the passenger side as “Lane and Kueng assisted.”

Then, Chauvin pulled Floyd out of the passenger side of the squad car and Floyd “went to the ground face down and still handcuffed.” That’s when Chauvin knelt on him. “None of the three officers moved from their positions,” even as Floyd repeatedly said “I can’t breathe.”

The criminal complaint notes that “police are trained” to know this “type of restraint with a subject in a prone position is inherently dangerous.” 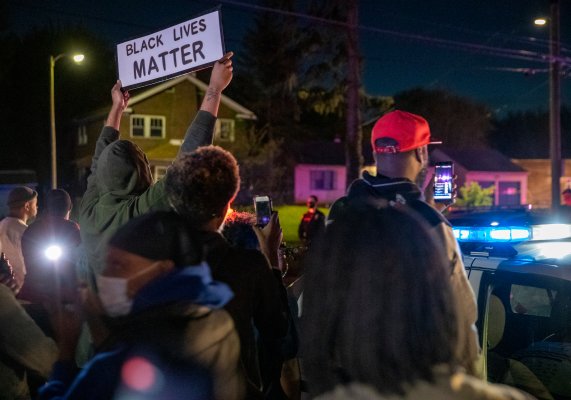