One man was shot dead when police and the National Guard opened fire toward a crowd of people during protests in Louisville, Ky., early Monday morning, officials said later the same day.

The Louisville Metro Police Department (LMPD) Chief Steve Conrad said in a news briefing on Monday that after another night of protests over the fatal police shooting of Breonna Taylor in Louisville in March and the killing of George Floyd while he was in police custody in Minneapolis in May, the Kentucky National Guard and LMPD were dispatched to a parking lot at Dino’s Food Mart at 12:15 a.m. to break up a large crowd that had gathered there.

As officers and soldiers began trying to disperse the group, someone in the crowd fired at members of the agencies, Conrad said. Both the LMPD and National Guard fired back, he said. One man, who Conrad did not identify, died at the scene. Conrad added that several persons of interest are being interviewed and video footage is being collected.

“I think it’s very, very clear that many people do not trust the police. That is an issue that we’re going to have to work on and work through for a long time,” the police chief said.

Hundreds of protesters have been chanting “no justice, no peace” as they demand for police accountability in the killing of the 26-year-old Emergency Room technician Taylor on March 13, when officers broke down her door to serve a search warrant as part of a drug investigation. Her boyfriend fired at police believing they were armed intruders. Taylor, who was unarmed, died after being shot at least eight times when police returned fire.

Monday’s shooting came after another outbreak of violence during protests on Thursday, when seven people were shot as someone opened fire from within a crowd, according to police. Two were taken for surgery and five were in good condition, Louisville Mayor Greg Fischer said Friday morning. No one has been arrested yet in that incident.

A day later, on May 29, Taylor’s family released a message on Twitter urging protestors to remain peaceful. The woman said, “We are not going to stop until we get justice. But we should stop tonight before people get hurt. Please go home, be safe, and be ready to keep fighting.” 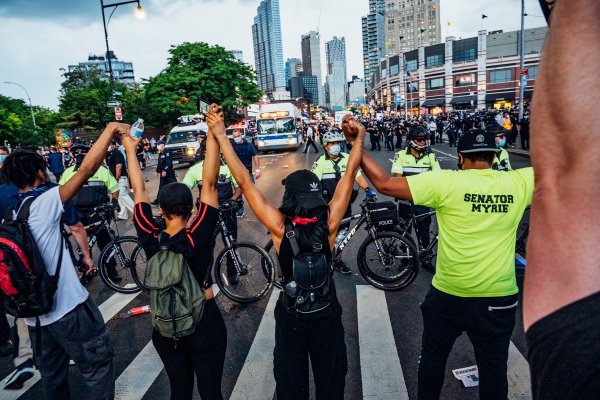 'America Has Its Knee on People of Color'
Next Up: Editor's Pick