Trump's Divisive Instincts Helped Him Win the White House. Where Will They Take America Now?

On a night when protests over racial injustice erupted into violent clashes across the country and multiple fires burned and store windows were smashed just two blocks from his bedroom in the White House, President Trump did not address the nation or try to calm a country grieving over the twin injuries of police brutality and a pandemic that has disproportionately hit minorities.

Instead he got political.

Trump wrote on Twitter just after 10 p.m. Saturday that the National Guard had been “released” in Minneapolis, “to do the job the Democrat Mayor couldn’t do.” Shortly after noon the next day, Trump played the political card again, writing, “Other Democrat run Cities and States should look at the total shutdown of Radical Left Anarchists in Minneapolis last night.”

It was a striking response to what appeared to be a turning point in the contentious era of racial tensions Trump has done so much to foment. Thousands of people marched peacefully in more than 70 cities across the country Saturday, and city leaders blamed the vandalism and arson on small groups. As of Sunday morning, about 5,000 National Guard troops were activated in 15 states and Washington, D.C. “in response to civil disturbances,” according to a statement from the National Guard Bureau.

Inside the White House, Trump’s aides are debating how the President should respond to the violence and how far Trump should follow his decades-old instinct to back the police and minimize claims of racial bias. Some aides have floated the idea of Trump giving a stand alone address to the nation, but so far, Trump has held off. On Sunday, Fox News’ Griff Jenkins suggested that President Trump should make a speech to the country. “I really believe it is time for President Trump to do an Oval Office address,” said Jenkins on Fox and Friends.

One White House official who spoke to TIME has advised against Trump making a speech. “I don’t think speeches are productive at this point, action is what’s needed,” says the official. Trump ran as “a law and order guy” and should stick to that, the official says, adding: “Any politician that tolerates this at the state, local or federal level including the President looks weak, looks weak because they are weak.”

Another advisor believes the violent outbursts, while disturbing and painful for the country, will ultimately play to Trump’s political advantage. “Really makes you want tough, Republican leadership,” a second White House official says. “I don’t care what your position is on anything else. People do not want their streets to be lit on fire and not feel safe in their homes,” says the official.

The focus on transparently political interests, from the President down to his aides and campaign staffers, is unsurprising five months before the election. From the beginning of Trump’s political career, he has repeatedly found political rocketfuel by pressing on the most divisive issues in America. He questioned President Obama’s citizenship. He said Mexico is sending “rapists” to the U.S. He criticized NFL players who took a knee during the national anthem to protest discriminatory police practices. He waded into the debate over Confederate monuments saying there are “very fine people” on “both sides.”

Now, as countrywide protests have surged following George Floyd’s death in police custody in Minneapolis, Trump has turned up the heat again, stoking the flames rather than seeking to put them out. Earlier on Saturday, Trump wrote on Twitter that the Secret Service had been prepared with the “most vicious dogs” and “ominous weapons” for use against protestors and seemed to egg on a confrontation with his supporters by saying Saturday would be “MAGA NIGHT” at the White House.

The clashes, and Trump’s response to them, have driven stories off the front pages about the rising COVID-19 death toll and his clumsy handling of the pandemic response. Trump’s leadership during the pandemic has taken a bite out of Trump’s approval rating, a Washington Post-ABC News poll released Sunday found. Trump’s approval rating with that poll had slipped slightly to 45 percent, down from 48 percent approving in March. The poll found Biden had widened his lead over Trump among registered voters, who favor Biden 53 to 43 percent.

Now Trump finds himself on more familiar ground: he always seems more comfortable politically when he’s driving toward a controversy rather than running from one. And that reflex is rewarded in the fervor of his base. Enthusiasm among potential Trump voters was higher than among Biden supporters in the Post-ABC poll, with 87 percent saying they were enthusiastic about supporting Trump and 64 percent were “very enthusiastic.” For Biden, 74 percent of supporters described themselves as enthusiastic and 31 percent as “very enthusiastic.”

President Trump “never understood what it was to be a healer, he never sought that, because that wasn’t his playbook,” says Timothy Naftali, a presidential historian at New York University. “He gained power by dividing us, not uniting us.”

Before returning to the White House Saturday afternoon, Trump was in Cape Canaveral, Florida to watch the launch of astronauts Bob Behnken and Doug Hurley into Earth’s orbit, a historic achievement that was drowned out by the widespread unrest in the country. Speaking after the successful takeoff, Trump called the death of George Floyd “a grave tragedy” that “should never have happened.” Trump described himself as “as a friend and ally to every American seeking justice and peace” and then turned to a stark warning, saying, “In America, justice is never achieved at the hands of an angry mob. I will not allow angry mobs to dominate. It won’t happen.”

But it is Trump’s reflex for division rather than his law and order talk that threatens to raise the stakes as violence mounts and racial tensions rise. With economic, racial, and political divisions deepening by the day, the country is left wondering just how far he is willing to go five months before the election, and what the cost will be. 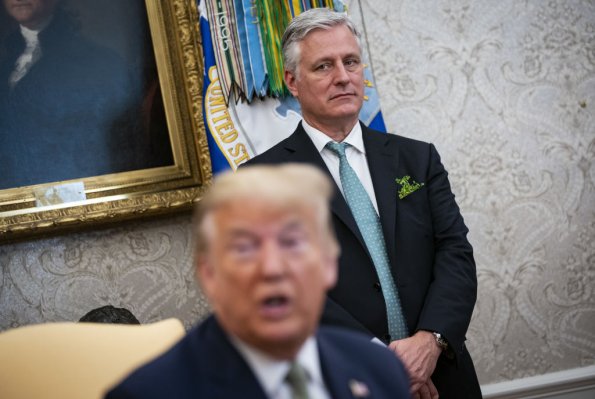