Yes, Your iPad Can Replace Your Desktop or Laptop. Here Are 5 Things to Know First

The Dutch government has order all schools to be closed until further notice in attempt to control the spread of the COVID-19 Coronavirus. Students are to be home schooled with digital means such as laptops, digital tablets or mobile phones.
Robin Utrecht — SOPA Images/Getty Images
By Patrick Lucas Austin

Apple’s latest souped-up iPads, along with accessories like the Magic Keyboard and software enhancements in iPadOS, have turned the company’s tablets into bona-fide desktop and laptop replacements.

But if you really want to use your iPad as your primary computing device, there are a few things you should keep in mind. Here are five tips for replacing your PC or Mac with one of Apple’s tablets, whether for work, school, or just day-to-day usage.

Get a real keyboard (and a mouse)

Lack of mouse support was long the main hurdle preventing the iPad from operating as a PC replacement. But Apple’s latest iPadOS update gives the iPad external mouse and trackpad support, giving you a desktop- or laptop-like cursor for the first time.

But before you get a mouse to go clicking away, you should probably get a keyboard, too. You can pair your own Bluetooth keyboard to your iPad and get your typing done that way, but you can also get yourself a keyboard cover that doubles as a case, and makes your iPad look more laptop-like than usual. Apple makes its own keyboard covers with different features depending on the iPad you’re using: iPad Pro users can grab the trackpad-free Smart Keyboard Folio, or the trackpad-equipped Magic Keyboard Cover. iPads lacking the Pro moniker have an Apple-provided option when it comes to keyboards: the Smart Keyboard uses the tablet’s embedded Smart Connector, and doubles as a cover when not in use, but doesn’t feature any flexibility in terms of viewing angles.

You can also look to third-party keyboards for added functionality. Keyboards like Logitech’s backlit Combo Touch turn your iPad into the closest thing to an iPad Pro without the added cost. It adds a detachable keyboard and trackpad cover to the iPad, along with an adjustable kickstand akin to the Microsoft Surface — arguably more useful than Apple’s own Magic Keyboard and its inflexible posture. There’s also the series of wireless keyboards from Brydge, which affix to your iPad to turn it into a facsimile of a laptop. The new Brydge Pro+ works with the iPad Pro and includes an integrated trackpad, while the Brydge Pro fits on the lower-end iPad, but lacks a trackpad.

Find substitutes for your go-to apps

Some things are just easier to do on a PC—but that doesn’t mean they’re impossible to do on an iPad.

Need to send specific files or open certain links in particular apps and web browsers? Check out Opener, an app that lets you take advantage of the iOS share sheet (indicated by the box with an arrow sticking out of it). Use an app like 1Password to access your protected online accounts on any device, on iOS, Mac, or PC. TextExpander can save you time typing repeated email responses, names, addresses, or forms by creating shortcuts corresponding to their longer stored sentences and paragraphs.

Need a more powerful to-do list? Apple’s integrated Reminders app is free and suitable for day-to-day tasks, but apps like Todoist or Omnifocus offer multiple ways to restructure your priorities and projects you want to accomplish whether on the job or around the house. What about a word processor? Google Docs, the minimalist iA Writer, and the organization-friendly Scrivener all offer different takes when it comes to writing, drafting, and organizing text. For a more powerful text editor, check out Drafts, which can send the text you write to other apps, boosting your productivity and saving you time in the process.

Learn how to manage your “windows”

Understanding how to manage your app windows is perhaps the most frustrating part of using an iPad as a replacement for your PC.

Whereas window management is a snap on a PC, on an iPad, you’ll be dragging apps, holding them in place, and swiping them to certain parts of the screen to keep your multitasking habits alive. The iPad’s Split View feature puts two apps side-by-side, while its Slide Over feature will overlay an iPhone-shaped version of your app on a section of either your home screen or atop the app you’re already using. You can operate up to three apps at a time, and drag and drop items like photos and email attachments between them.

To start using the iPad’s multitasking feature, open an app or place it in your iPad dock. From there, you can select another app in the dock, long press it, and drag it up either on top of the current app, or next to it, enabling its Split View mode. You can adjust the real estate each app takes up by sliding the central divider left or right. By repeating the process with a third app, you can layer it on top of either of the two apps, letting you have a word processor on one side, a calendar on the other, and your messaging app of choice on top of that.

While slick, it’s still not perfect. Using the keyboard in Split View gets a bit frustrating if you keep switching between apps, and not every app supports every multitasking mode.

Get a stand, too

If you’re using your iPad as your primary machine these days, you’re probably suffering from some pretty poor posture—you’re more hunched over with your neck tilted downward, perhaps. Working that way for a few days might be well and good, but for longer periods of time, you’re just asking for a strained neck, uncomfortable back, and generally unpleasant feeling.

But an iPad on a stand? That’s a game-changer. Not only will a stand help correct your bad posture, but with the right model—either one attached to an articulated arm or with a swiveling head—you can use your iPad in either portrait or landscape mode, and pair it with a Bluetooth keyboard and mouse (or trackpad) to gain even more control.

For more versatility, you need a hub

If you need to connect lots of devices to your iPad, you’ve probably already encountered a problem: it only has one port. The solution? A USB-C hub, which allows you not only to connect devices like flash drives or digital cameras to your iPad, it also supercharges your tablet when paired with the right external accessories.

Streaming video for a conference call? Connecting your iPad to a hub with an Ethernet port gives you a wired connection for lag-free calls. Need to offload some photos from your digital camera? A hub with an SD card slot, combined with Apple’s Files app, makes short work of getting your pictures off the card and into your app of choice (or the cloud). You can even connect your favorite wired keyboard rather than spend money on a wireless model.

A hub can also give you some much-needed screen space by connecting your iPad to a second display. Depending on the app you’re using, your iPad will either mirror your screen or offer you a secondary monitor to display images, keynote presentations and more unencumbered by your user interface or editing tools. Apps like Photos, Keynote, and Procreate can use a second display to show off larger versions of whatever you’re viewing on your iPad, too—it’s great for displaying presentations or photo slideshows.

Still, iPad second screens aren’t perfect. When viewing a photo in an app like Photos, the image itself will be showcased in an awkward 4:3 aspect ratio, with the image taking up the entirety of the monitor only after you do a little zooming in with your fingers.

Even better is the ability to send video to your second, larger display when connected. The iPad retains its 4:3 aspect ratio when plugged into an external display, even if it’s a widescreen monitor. But when watching video from, for example, your favorite streaming app, the iPad will take advantage of the entire monitor, providing you with a proper 16:9 aspect ratio and viewing experience. 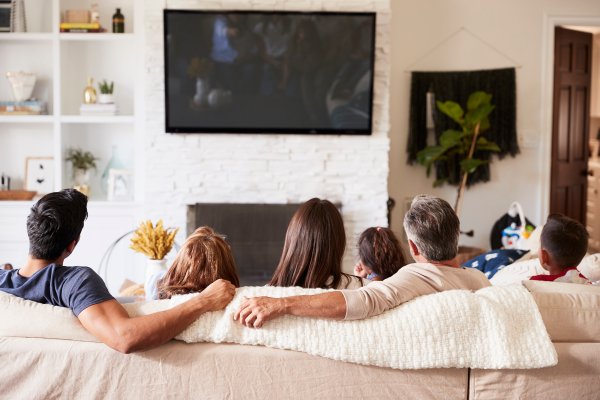 3 Stress-Free Ways to Share Your TV or Computer With Your Quarantine Companions
Next Up: Editor's Pick