President Donald Trump’s private banking information may have been accidentally shared during a press briefing, when White House Press Secretary Kayleigh McEnany announced the President would donate his salary to the Department of Health and Human Services (HHS) this quarter.

On Friday, White House Press Secretary Kayleigh McEnany announced that the President’s quarterly salary of $100,000 will go to HHS “to develop new therapies for treating and preventing COVID-19 so that we can safely reopen.” In the announcement, McEnany held up what appears to have been a real check signed by Trump, with banking information, including the routing number and bank account number, visible. The New York Times reports that an administration official said mock checks are not used in briefings.

When asked for comment, White House spokesman Judd Deere, said in a statement, “President Trump has donated his entire salary since he took office — a promise he made and has kept — and today his salary went to help advance new therapies to treat this virus, but leave it to the media to find a shameful reason not to simply report the facts, focusing instead on whether the check is real or not.”

The President has stuck to his 2016 campaign pledge to donate his annual $400,000 salary to government agencies rather than keeping it himself. (Although he takes $1 a year to adhere to the constitutional requirement that he be paid.) Each quarter the White House announces which government agency will receive his $100,000 salary. Past recipients include the Small Business Administration, the National Institute on Alcohol Abuse and Alcoholism, the Department of Homeland Security and the Department of Veterans Affairs.

Sharing personal banking information can risk exposing yourself to fraud or hackers. 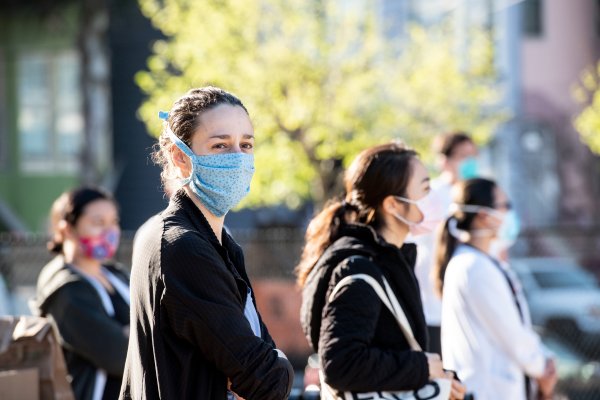 Inside San Francisco's Ambitious Plan to Bring Universal Coronavirus Testing to An Entire U.S. City
Next Up: Editor's Pick