Armed Conflict Has Forced 661,000 People to Flee Their Homes During the Coronavirus Pandemic

Armed conflict has forced at least 661,000 people around the world to flee their homes during the last two months of the coronavirus pandemic, according to a new report, as experts say world leaders are failing to protect displaced communities and leaving them more exposed to the impact of the virus.

The Norwegian Refugee Council said Friday that between March 23 and May 15, armed conflict in 19 countries has displaced hundreds of thousands of people, despite a call from the United Nations’ Secretary-General Antonio Guterres for a global ceasefire. Chad and Niger, Afghanistan, Syria, and Myanmar were among the countries that saw more than 10,000 people displaced, according to the report. The highest number by far was in the Democratic Republic of Congo (DR Congo), where more than 480,000 people have been forced to leave their homes due to clashes between armed groups and the country’s military, accounting for 75% of the total number of people displaced worldwide.

While these countries are currently towards the lower end of the global rankings for coronavirus cases and deaths, experts are warning that outbreaks could have potentially catastrophic effects in already unstable states. In Bangladesh’s densely populated Cox’s Bazar, where around 1 million Rohingya refugees from Myanmar are currently living, aid organisations have warned that the coronavirus “could spread like wildfire” after the first positive case was confirmed on May 14.

So far, there have been less than 2,000 confirmed cases and 61 deaths due to COVID-19 in DR Congo. And although there are few official cases of the coronavirus outside of the capital Kinshasa, Maureen Philippon, Country Director for the Norwegian Refugee Council, says it’s difficult for people in DR Congo not to feel worried when faced with the double crisis of the pandemic and ongoing armed conflict. As several countries around the world have enacted quarantine, lockdown and social distancing measures, the logistics on the ground make in DR Congo have made it near impossible to implement due to lack of shelter, overcrowding and lack of clean water in displacement sites. “People say they are hit twice in a row: first by the conflict making them lose everything, and now by the living conditions that are increasing their risk to the virus,” Philippon tells TIME.

“One of the men we spoke to [in Ituri province] had to flee his village on May 11. He left with $11 in his pocket and nothing else,” Philippon says. Another woman told Philippon that she had left her house for fear of an attack on May 12, and was separated from her husband and two sons in their escape — she has not seen them since. “What she wants is peace. And we are hearing this from many people: they want peace, they want to be able to make a living on their own.”

DR Congo has been the site of ongoing multiple, complex conflicts and human rights abuses since the end of its civil war in 2003, with tensions rising in the central Kasai region since 2016. “Almost each small set of conflicts has its own dynamic, making it difficult to tackle,” says Philippon. The number of challenges, the expanse of Africa’s second largest country and its challenging geographical settings, and a state that struggles to impose its governance have all contributed to the situation today. Over the course of 2019, 1.7 million people in DR Congo were displaced, the second highest country figure behind Syria.

Congolese people are already dealing with multiple public health crises including malaria, cholera and the world’s worst measles epidemic. In April, 6 new cases of the Ebola virus were reported in the country, after an outbreak was declared in August 2018 which has resulted in 2,279 deaths. “The outlook is grim,” says Philippon, emphasizing that DR Congo is home to the second-largest hunger crisis in the world after Yemen.

Al-Swaidah displacement camp in Yemen, though there is nothing to mark it as such: no running water, no toilets, no electricity. It is home for around 500 displaced families from Marib and Nihm.
Hassan Al-Homaidi—NRC

More broadly, the coronavirus pandemic has hit the humanitarian sector hard: on Wednesday, Oxfam announced that it would withdraw its operations in 18 countries and lay off nearly a third of staff due to financial pressures. The Norwegian Refugee Council says that the crisis has also reduced access for aid organizations to areas on the ground, making data collection more difficult and therefore the figure of 661,000 displaced people is likely to be an underestimate.

The organizations’s new report comes with an appeal to the United Nations Security Council for stronger leadership, and to issue a clear call to halt hostilities and conflict around the world in order to focus on the pandemic response. “While people are being displaced and killed, powerful members of the UN Security Council squabble like children in a sandbox,” NRC’s Secretary General Jan Egeland said in a statement. “World leaders must rise to the occasion and jointly push parties to cease their fire and unite in protecting all communities from COVID-19. Now is not the time for kindergarten politics.” 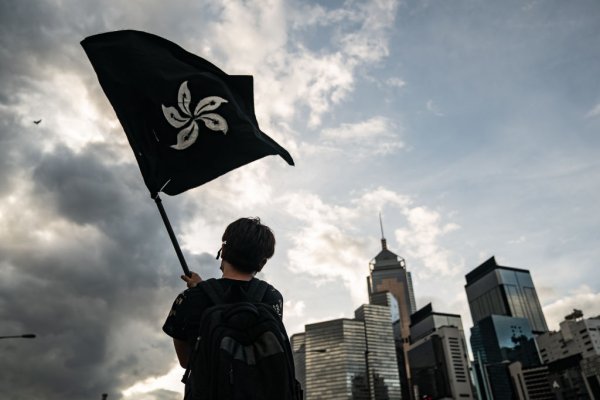 'Saddest Day in Hong Kong's History'
Next Up: Editor's Pick