Trump Goes Without Mask For Public Tour of Michigan Factory, Says He ‘Didn’t Want to Give the Press the Pleasure’ of Seeing Him Wearing One

President Donald Trump did not wear a mask for the public portion of a Thursday tour of a Ford manufacturing plant in Ypsilanti, Mich., which has been repurposed to produce ventilators amid the coronavirus pandemic.

“They said they’re not necessary here,” Trump told reporters, adding that he has worn a mask in another area of the factory where the media were not present. “I didn’t want to give the press the pleasure of seeing it.”

“Everybody’s been tested and I’ve been tested,” he also said. “In fact I was tested this morning.”

In a statement provided to TIME on Thursday after the President’s visit, Ford Motor Company said that, “Bill Ford encouraged President Trump to wear a mask when he arrived. He wore a mask during a private viewing of three Ford GTs from over the years. The President later removed the mask for the remainder of the visit.”

And while he had said he was not letting the media see him in his mask, President Trump did show it off to reporters.

“This is my mask right here. And I liked it very much,” he said, holding a navy blue mask with the presidential seal on it. “I actually honestly, I think I looked better in the mask.”

President Donald Trump holds a mask as he speaks during a tour of the Ford Rawsonville Plant in Ypsilanti, Michigan on May 21, 2020.
BRENDAN SMIALOWSKI/AFP—Getty Images

On Tuesday, Ford Motor Company said it had told President Trump that he and any individuals with him would need to wear masks while visiting the factory to help prevent the spread of coronavirus, per CNBC. “Our policy is that everyone wears PPE to prevent the spread of COVID-19,” Ford spokeswoman Rachel McCleery told Reuters on Tuesday. “The White House has its own safety and testing policies in place and will make its own determination.”

According to the White House pool report, all of the Ford officials present during Trump’s tour wore masks.

Read more: The Ethics of Wearing (or Not Wearing) a Face Mask During the Coronavirus Pandemic

Earlier in his visit, President Trump had participated in a listening session with African American community leaders in a draped-off section of the factory floor. According to the White House pool report, the 10 individuals around the table were seated several feet apart, and only two wore masks. (The President was not one of them.)

When asked by reporters on Tuesday if he would wear a mask during his visit, the President had said that, “it depends.”

On Thursday morning he reiterated similar equivalences, adding, “A lot of people have asked me that question. I want our country to get back to normal. I want to normalize.”

Michigan Gov. Gretchen Whitmer has issued an executive order requiring all individuals wear facial covering while in enclosed public spaces (as long as they can medically tolerate masks), as well as an executive order suspending all non-essential tours of manufacturing facilities.

And in an open letter published on Wednesday, Michigan’s Attorney General Dana Nessel, said the President had a “social and moral responsibility” to wear a mask while in the factory. Nessel also said on CNN Thursday morning that if the President “fails to wear a mask, he’s going to be asked not to return to any unclosed facilities inside our state.”

The U.S. Centers for Disease Control and Prevention recommends all individuals wear non-surgical face masks in public settings where social distancing is hard to maintain, “especially in areas of significant community-based transmission.” On April 9, First Lady Melania Trump released a video encouraging Americans to do so.

Read more: Why Wearing a Face Mask Is Encouraged in Asia, but Shunned in the U.S.

However, the President has yet to be seen wearing a mask in public. Photographs of a May 5 visit to the Honeywell facility in Phoenix, Arizona — which produces N95 masks — showed the President without a mask, despite the fact that he told reporters earlier that day that he would wear a mask if Honeywell was “a mask facility.” He said the following day that he had actually worn a mask during a portion of the visit when cameras were not present.

When asked for comment, a spokesperson for Honeywell told TIME that, “Following White House recommended protocol, a small number of individuals directly interfacing with the President were tested for COVID-19 immediately prior to the event, received negative test results, and were permitted to not wear masks during portions of the visit based on that medical screening. All others present were wearing masks and social distancing in accordance with Honeywell’s site policy.”

Vice President Mike Pence also faced criticism in late April after video footage showed him not wearing a mask while touring the Mayo Clinic, despite the famed medical center’s requirement that all patients and visitors wear appropriate PPE to help slow the spread of COVID-19. In a statement provided to TIME, the Mayo Clinic said they had “shared the masking policy with the VP’s office.”

Pence was later photographed wearing a mask while touring a General Motors plant in Indiana on April 30.

Last week, the White House began requiring all staffers to wear masks or facial coverings when entering the building, after multiple staffers close to the President and Vice President tested positive for COVID-19.

The original version of this story misstated the designation of the masks produced by the Honeywell facility in Phoenix, Arizona. The facility produces N95 masks. 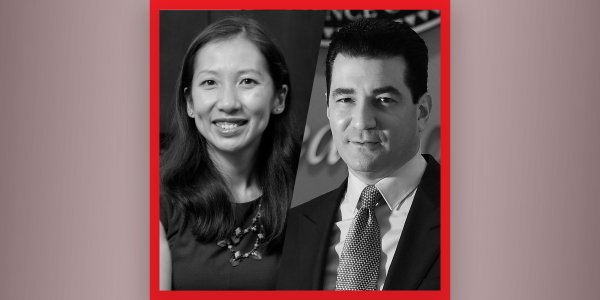 Leana Wen and Scott Gottlieb: The U.S. Can't Get Complacent
Next Up: Editor's Pick