Naomi Wadler, center, takes part in a forum with Ayakha Melithafa and Autumn Peltier during the World Economic Forum in Davos, Switzerland Jan. 20, 2020.
Arnd Wiegmann—Reuters
Ideas
By Naomi Wadler
Wadler is an activist and seventh-grade student in Washington, D.C.

As a black woman in America, I often feel that there is not much to be hopeful about, and these times are certainly no different. I see the news and, while I am outraged, I am sadly not surprised. Stories like these are as old as this country.

I often feel the work I do as an activist makes no difference and the effort is futile. But there’s another way to look at these headlines too. I’m still a student, and I understand from what I’ve learned about history–in and out of class–that in the past these stories were unlikely to have been told at all.

In the case of Arbery, an unarmed black man was shot while out on a jog, and for months no arrests were made. But people like Brittany Packnett Cunningham and Don Lemon used their platforms to rally folks to action. People made calls, tweeted and protested. The story was told and retold to a growing audience. Then in May, 74 days after Arbery’s death, two men were arrested and charged in connection with the shooting.

It isn’t new for people to march and stand up for what is right, but we are in an age where the news coverage is changing, where the world is taking a little more notice, where more people are finding their voices and using them to help others.

In January, I was invited to speak at the World Economic Forum in Davos, Switzerland, as part of a group of young folks they called “change-makers.” While it remains to be seen if they will be moved to action, the white, wealthy men who typically populate such gatherings clearly realized the need for young, diverse voices. Rooms full of adults who engage with and show up for black and brown kids on panels matter. There, we can tell the stories that historically have been overlooked.

We live in a country where economic disparities are the norm. Because of systematic racism, the black and brown people who work as hourly essential workers have found both their jobs and their health at risk. I see nothing positive in this reality.

But the fact that the stories of these people are being told is a small sign of progress. When you hear the voices of people directly affected by the disease and by the long-standing and virulent societal inequities, it’s that much harder to truthfully say you had no idea. And then it’s that much harder to do nothing. Knowing that it’s possible to raise awareness like this, both in the news and in community conversation, inspires me to keep going even when I feel discouraged. It gives me hope that each of us can work toward a more equitable future for girls like me. 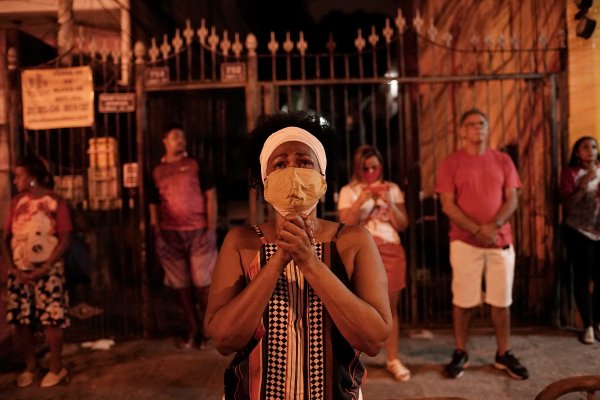 Brazil Is Starting to Lose the Fight Against Coronavirus—and Its President Is Looking the Other Way
Next Up: Editor's Pick