President Donald Trump said it’s “a badge of honor” that the U.S. has more than 1.5 million cases of coronavirus — the highest number of infections globally — saying the total is simply a reflection of a successful testing regime.

“I view it as a badge of honor, really, it’s a badge of honor,” Trump told reporters during a cabinet meeting at the White House on Tuesday. “It’s a great tribute to the testing and all of the work that a lot of professionals have done.”

At least 91,000 Americans have died from Covid-19, the disease caused by the coronavirus, since February. The U.S. has now performed more than 11.8 million tests for infection by the virus, according to the Covid Tracking Project, after the government experienced delays in getting tests developed and manufactured. The U.S. continues to face testing shortages and sets priorities for who gets one.

Contrary to Trump’s claim, U.S. testing levels aren’t extraordinary. The U.S. trails countries like the U.K., Italy and Germany in tests conducted per 1,000 people, Bloomberg data show. And the U.S. is finding a case for every 7.8 tests, far behind other countries like New Zealand, Australia and South Korea, who have to test far higher numbers of people to find a case, according to figures compiled by Our World In Data.

The U.S. has the largest publicly reported outbreak in the world. The U.S. Centers for Disease Control and Prevention says the U.S. has conducted a reported 11.3 million tests, though Trump said he believed the number was closer to 14 million.

“If you’re testing 14 million people, you’re going to find many more cases,” Trump said. “Many of these people aren’t very sick but they still go down as a case, so, actually, the number of cases — and we’re also a much bigger country than most. So when we have a lot of cases, I don’t look at that as a bad thing, I look at that as, in a certain respect, as being a good thing because it means our testing is much better.”

One administration official, briefing reporters earlier on Tuesday on condition of anonymity, said the U.S. is starting to see a decline in cases and deaths, even as testing increases. The positive test percentage is also decreasing, meaning that the nation is finding the cases less frequently in testing, the official said.

–With assistance from Justin Sink. 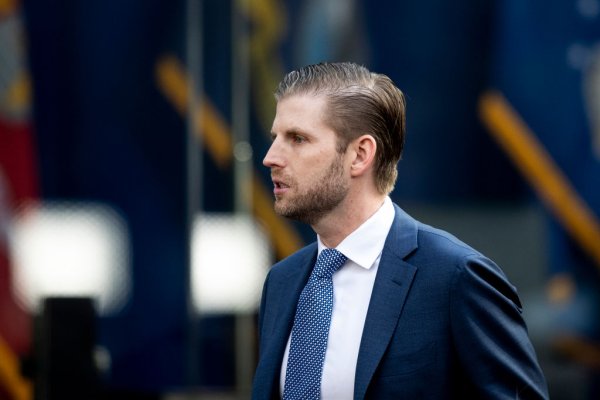 Eric Trump: Distancing Is a Democrat 'Strategy'
Next Up: Editor's Pick