The Coronavirus Crisis in the U.S. Is a Failure of Democracy

Reporters raise their hands to ask President Donald Trump questions during a press briefing with the coronavirus task force, at the White House on March 16, 2020, in Washington.
Evan Vucci—AP
Ideas
By David Litt
Litt, a former senior speechwriter for President Barack Obama, is the author of Democracy in One Book or Less: How It Works, Why It Doesn't, and Why Fixing It Is Easier Than You Think and Thanks, Obama: My Hopey, Changey White House Years.

It’s become commonplace to refer to COVID-19 as “the worst public health crisis of our lifetimes.” But what has cost the United States so many lives and jobs during the pandemic is not, at root, a failure of public health. It’s a failure of democracy.

Despite our political polarization, and in the face of an unprecedented threat, the American people have been in remarkable agreement about what they expect from their government. From the time the virus was discovered, our scientists and public health officials urged aggressive action and put forward plans to save lives. Poll after poll has shown that a clear majority of Americans trust want our leaders to heed the experts’ advice. Yet that hasn’t happened. We were far too slow to implement social-distancing guidelines – a delay epidemiologists found is responsible for 90% of U.S. coronavirus deaths – and now we’re acting far too quickly to reopen the economy.

In other words, with lives on the line, our elected leaders are ignoring the people’s will, and Americans are dying as a result. In our shining city on a hill – the global model for representative government – how could this possibly happen?

The answer, while dispiriting, is simple: Our representative government isn’t nearly as representative as it used to be. Over the last four decades, our republic has been completely transformed, with nearly every change making our leaders far less responsive to the public interest. More than any political or cultural trend, more even than President Trump, our redesigned system of government is responsible for the crisis we find ourselves in today.

When I worked in the Obama White House, I often heard the phrase, “Good policy is good politics.” The implication was clear: in a democracy, there exists a clear link between politicians’ choices and electoral outcomes, between power and accountability. In recent decades, however, that link has been almost entirely severed. The number of Americans legally barred from voting has risen dramatically, and many Americans who retain their right to vote are finding it harder to exercise that right than ever before. Between 2008 and 2016, the number of polling places in America was cut by more than 10%. Voter purges have kicked millions of eligible Americans off the voting rolls, a number that is only growing. Restrictive laws passed within the last decade have made it harder to register, harder to vote and harder to ensure that a vote will count. Thanks to Citizens United, and other recent Supreme Court decisions like it, a handful of donors have more power than ever. But most American citizens have much less.

It’s no surprise that the people most likely to suffer because of our government’s flailing response to the coronavirus – lower-income and nonwhite Americans – are the most likely to be disenfranchised. In our redesigned democracy, voting restrictions can turn bad policy into good politics more efficiently than at any time since the end of Jim Crow.

Americans’ political power has been further diminished by our political map. Between 1997 and 2016, Much of this shift is organic, occurring because Democrats increasingly are found packed together in cities, but gerrymandering plays a newly expanded role as well. Devious district-drawing has always been part of American politics. (Patrick Henry tried to gerrymander James Madison out of the very first Congress in 1789.) But as a group of researchers from the University of Chicago’s Law Review found, “the scale and skew of today’s gerrymandering are unprecedented in modern history.” As we battle the coronavirus, American lives depend on a successful government response. But with rare exceptions, House Members’ jobs do not.

In the upper chamber, the problems created by our political map are the result not of design but of neglect. Thanks to a deal made under duress at the Constitutional Convention 233 years ago, every state gets the same two Senators, regardless of its population size. But the impact of the so-called “Great Compromise” is very different today than it was back then. With Democrats increasingly found in dense cities, and Republicans in exurbs and rural areas, the Senate’s structure now gives one party an enormous edge, because a majority of states are Republican-leaning even when a majority of voters are not.

The Senate’s map has had particularly disastrous consequences over the last three months, because COVID-19 hit America’s urban population centers first and hardest. In early March, for example, as the virus was spreading, the first 15 U.S. states to report cases of the coronavirus accounted for 56% of America’s population but only 30% of the America’s senators. No wonder the Senate was initially slow to act.

Of course, our states’ boundaries are hardly new. But by refusing to admit Washington, D.C., as a state, even as its population has grown to 120% the size of Wyoming’s, Senators have gone out of their way to maintain the imbalance of power between urban and rural interests in their chamber.

A similar failure to mend the cracks in our democracy’s foundation is responsible for the White House’s disastrous handling of the crisis. About 50 and 40 years ago, respectively, Republican Richard Nixon and Democrat Jimmy Carter attempted to abolish the Electoral College, correctly understanding that it was both obsolete and incompatible with our modern conception of democracy. Had they succeeded, Donald Trump would today be a former reality TV star with an unhealthy addiction to social media. Instead, despite being rejected by voters, President Trump is in charge of our pandemic response.

Finally, the expansion of corporate power in our democracy has pushed our government into acting more slowly and reopening more quickly than the American people believe is safe. Within the past two decades alone, the amount of money spent on Washington lobbying has doubled, to the point where the annual budget for influencing Congress now far exceeds the annual budget for the House and Senate itself. When major decisions are being made, the American people still have a seat at the table. But business has far more seats than it did when I was growing up in the 1980s and 1990s.

Given corporations’ vastly increased clout with policymakers, it’s hardly shocking that business groups were able to convince the Trump Administration to delay and scale back the use of the Defense Production Act to compel the manufacture of crucial medical supplies, or that Senate Republicans’ make-or-break priority for the next relief package is waiving liability for employers who put their workers at risk.

That our government has failed to promote the public welfare during this crisis is a tragedy. But it’s no surprise. From the way we manage elections to the way we fund campaigns, from the congressional districts we draw to the lobbyists we include in the policymaking process, the story is the same. The American republic is a government of fewer people, by fewer people, for fewer people than at any time in the past half-century. And We, the People, are suffering because of it.

Yet even now, nothing about our democracy’s decline is inevitable. There are plenty of ways we can restore a representative government that don’t involve passing a constitutional amendment or hoping Mitch McConnell’s heart grows three sizes one day. Making voter registration automatic; re-enfranchising millions of Americans; a sliding-scale tax on corporate lobbying; creating public financing for campaigns; admitting Washington, D.C., and Puerto Rico as states – all these things and more could be done by a single act of Congress.

Fixing our democracy should be a top priority for all Americans, not just when it comes to the pandemic, but when it comes to tackling nearly every great challenge facing America today. From gun safety to climate change to immigration to income inequality, it’s the same story: Americans want one thing, our government does another, and the American people are worse off as a result.

Tragically, it’s too late to prevent the worst of the coronavirus crisis. But by restoring our representative government, we can prevent the next great crisis, and save untold numbers of American lives. 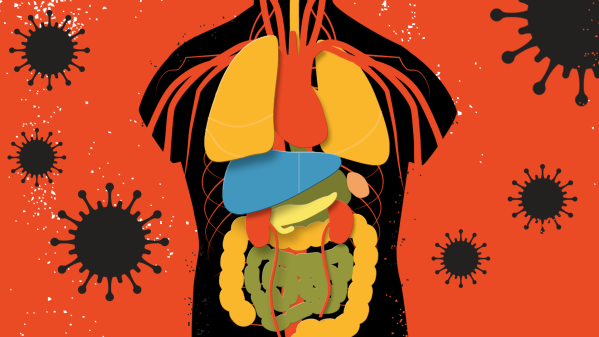 What We Know About the Effects of COVID-19 on the Body
Next Up: Editor's Pick