Meghan Downey protests outside as U.S. Education Secretary Betsy DeVos announces changes in federal policy on rules for investigating sexual assault reports on college campuses in Arlington, Virginia on Sep. 7, 2017.
J. Lawler Duggan—The Washington Post via Getty Images
Ideas
By Nicole Bedera
Bedera is a doctoral candidate at the University of Michigan in the Sociology Department.

On May 6th, the Department of Education released a long-anticipated set of regulations on how schools—and universities in particular—manage sexual misconduct. This interpretation of Title IX not only places new barriers in the way of survivors coming forward, but, for most victims, eliminates the possibility altogether.

At the most basic level, the Trump administration’s new rule will make it harder than ever for survivors to understand their legal rights—and if survivors can’t understand their rights, it’s very unlikely that they will use them. The new rule is long and difficult to comprehend. While Title IX itself is only a single sentence—“No person in the United States shall, on the basis of sex, be excluded from participation in, be denied the benefits of, or be subjected to discrimination under any education program or activity receiving Federal financial assistance”—the new rule is contained in a 2,033 page document. To put this in perspective, the Obama administration’s guidance was 53 pages and the Trump administration’s first pass at the policy was 38. For students trying to access their rights, this matters. Much of our national conversation about Title IX can be traced back to student survivors taking the law into their own hands. Without any legal training, student activists taught each other about their Title IX rights and brought lawsuits against the schools they believed had violated them. That type of advocacy becomes a lot more difficult when the policy on the books is so needlessly lengthy and contradictory that even experts on campus sexual violence have struggled to understand the nuances of the rule.

For survivors who do have the resolve, the patience, and the resources required to navigate the new rule, they will find that many of the harms they hoped to report are no longer reportable. The new rule has drastically limited the types of sexual misconduct universities are required to investigate. Most notably, the Trump administration redefined sexual harassment to a narrow range of actions that are “severe, pervasive, and objectively offensive.” The problem is that almost no sexual harassment is considered objectively offensive. For evidence of that, we need not look any farther than the comment section of any major newspaper’s coverage of men whose maltreatment of women was exposed by #MeToo. Aziz Ansari, Louis CK, Joe Biden, Donald Trump, and even Bill Cosby and Harvey Weinstein all have their defenders who insist that whatever they have done isn’t “that bad.” By taking the narrowest definition of sexual harassment, the Trump administration has reduced the number of cases universities can consider. I spent the 2018-2019 academic year conducting ethnographic research on how one university managed Title IX complaints, observing and interviewing students and staff as they attempted to address sexual harassment and gender-based violence that occurred. In that time, Title IX administrators labeled most types of sexual misconduct or discrimination as “not that bad,” including everything from unwanted hugs to removing clothing in the workplace to death threats from physically violent abusers. There were few—if any—violations that they unanimously agreed were “offensive.”

Even if an instance of sexual misconduct meets the high bar of “objectively offensive,” there are new parameters on the context in which it had to take place to require university intervention. A sexual assault must have happened either on campus or “in conjunction with an education program or activity.” After much advocacy by survivor activists, fraternity and sorority houses are considered under jurisdiction of the new policy, but study abroad programs are not. It is unclear if student taking online classes would be protected. It is up to individual universities to decide if graduate students will be protected if they were harassed or assaulted somewhere like a conference, an off-campus research site, or a department-sanctioned party in a faculty mentor’s home. According to RAINN, only 8% of sexual assaults take place on school property, which means these regulations give universities permission to ignore the vast majority of sexual assault claims.

In the unlikely event that a survivor’s experience meets all of these requirements and they understand the necessary steps to come forward, it is still possible that their university will offer no meaningful intervention. The Trump administration has made formal investigations more difficult and potentially dangerous for survivors, requiring that survivors undergo cross-examination in a live hearing that would bring them face to face with their assailants. Recognizing that this will make fewer survivors want to use a formal process, the Trump administration is now allowing something called “informal resolution” as a way to respond to reports of sexual assault. For survivors who are afraid to confront their abusers, this could be the only viable option left, but it isn’t a satisfying one. Informal resolution is notoriously vague. It has only two requirements. First, it must be voluntary, not only for survivors, but for accused students. That means that if an assailant does not want to participate in disciplinary proceedings, they have the right to refuse. To put it another way, perpetrators of sexual assault have the right to end an informal resolution before it begins. Second, any outcomes including punishment for the accused are banned. That means no expulsions or suspensions, but it potentially also rules out things like required trainings on sexual violence or asking the assailant to change a class schedule or a housing assignment. In many cases, informal resolution will be little more than some shuffling of paperwork between administrators and survivors before it becomes clear that no one else is interested in participating and that there are no meaningful outcomes available anyway.

The impact on survivors could be excruciating. To avoid an assailant, survivors are now the ones who must make all of the sacrifices. That could mean dropping the last class required to graduate because your assailant decided to take it the same term. It could mean moving dorms during midterms because your assailant has begun to stop by unexpectedly or leave threatening messages. It could mean avoiding specific clubs or campus spaces because your assailant chooses to spend time there. These concessions mean that survivors do not have equal access to education and are habitually placed in dangerous or traumatizing situations in trying to get their degrees. What may appear to be small inconveniences add up, stealing opportunities from survivors, threatening their academic performance, and making it harder to graduate.

Furthermore, the reason universities were tasked with adjudicating sexual assault complaints was not to punish perpetrators or end sexual violence, but to ensure that campuses are safe. When universities turn a blind eye to the most common ways sexual violence is perpetrated, they open the door to serial assailants using college campuses as a hunting ground for new victims. This makes campuses less safe for all women. Even as college education takes a different form during COVID-19, students’ risks of gender-based violence might be increased, not decreased. Intimate partner violence rates have increased since the pandemic began and violence may become more severe as abusive partners shelter in place together. Facing precarity on the job market and in their own programs, graduate students may become more dependent on abusive advisors for funding or other supports. Especially as other inequalities between students are heightened through learning at home, it is crucial that universities are not permitted to turn a blind eye to gender-based violence.

For the most part, these rules are guidelines, not requirements. Universities have the right to take a more proactive approach to address sexual violence, but there will be no federal oversight. What we are most likely to see in the years to come is that some schools—likely the wealthiest and best resourced schools—will continue to support survivors beyond the letter of law, while others will do the bare minimum. And all universities will have the right to look the other way when it’s convenient, be that to protect the child of a big donor or a star football player. And that’s the point. The new Title IX rule has given universities the power to choose when survivors are heard and when they are not by making it impossible for them to speak up for themselves. 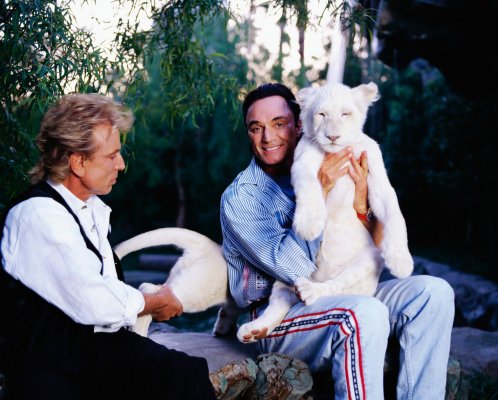 'Roy’s Legacy Is All of Vegas.' Penn Jillette Remembers Magician Roy Horn
Next Up: Editor's Pick