It’s one thing to be the Al Capone of 1929, a glamorous gangster living the high life and ruling the streets of Chicago. But if that Capone could meet the 1940s version of himself—addled by neurosyphilis and required to wear a diaper under his silk pajamas—he might have segued into a more boring but safer line of work, like selling life insurance.

The older crime boss is the one we meet in Capone, written and directed by Josh Trank (Fantastic Four) and starring Tom Hardy. The movie opens in the early 1940s, shortly after Capone’s 1939 release from prison, necessitated by his extremely poor health. He’s now in exile at his Florida estate, tended to by his half-adoring, half-exasperated wife Mae (Linda Cardellini) and recoiling from the ever watchful eye of the FBI. Incontinence aside, it might not be a bad life. But the family is nearly broke, and there’s a crucial detail that Fonz, as his family calls him, is struggling to call to mind in his foggy state: years earlier, he’d had the foresight to hide $10 million. Now he has no idea where he put it.

Fonz has other issues: he’s tortured by vivid hallucinations of his grisly past and haunted by the spirits of the men he’s killed. Perhaps worst of all, his doctor (Kyle MacLachlan) forces him to give up his beloved cigars, substituting…carrots.

Capone is an odd little film, at times weirdly engaging but often so bizarrely muddled that you might identify a little too closely with its perpetually unglued protagonist. But Hardy is always worth watching. Thanks to prosthetics, his face has the same doughy contours we see in pictures of the real Capone, but his eyes, at once dead and ruthless, do most of the work. This is the hollow gaze of a man who once had great, if ill-gotten, power and who is now just an old man before his time. (Capone died in 1947, at age 48.) In one scene, he and Mae watch The Wizard of Oz, projected in a home-theater setup, and Fonz stumbles toward the screen, singing along with Bert Lahr’s Cowardly Lion in an almost incomprehensible mumble: if he were king of the forest, he sure wouldn’t be stuck “smoking” carrots. The moral of Capone, left behind in its blurry wake, is that crime doesn’t pay. Especially when you can’t remember where you hid the money. 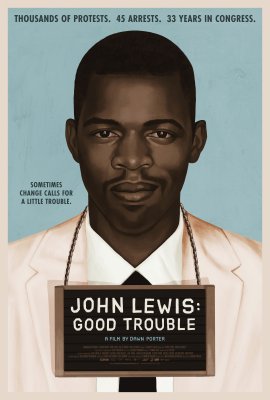 Watch the Trailer for a New John Lewis Doc
Next Up: Editor's Pick