Major League Baseball Is Planning a Comeback. Here's Why That Won't Be Easy

Rick Porcello #22 of the Boston Red Sox warms up in center field before the game against the Oakland Athletics at Fenway Park on May 11, 2016 in Boston, Massachusetts.
Adam Glanzman — Getty Images
By Sean Gregory

Pro sports are inching back into American life. Last weekend, the UFC held its first event in the U.S. since the COVID-19 outbreak began in the United States, in a near empty arena in Jacksonville, Florida. Though one fighter on the card and two of his cornermen tested positive for the virus before the event, UFC 249 carried on. NASCAR will hold its first pandemic-era race this weekend in Darlington, South Carolina, with safety measures in place.

But the comeback of one of the “Big Three” major team sports leagues — the MLB, NBA, or NFL — would mark more of a return to normalcy. Baseball, basketball, and football teams are part of the civic fabric of municipalities across the country. Players are beloved by millions. The return of baseball, in particular, carries special significance. Baseball is still our national pastime, the sport of summer, the daily background rhythm of American life. And the sport is working towards its return.

MLB owners have approved a tentative plan that calls for an 82-game season — instead of the typical 162-game slate — to begin in early July. No fans would be permitted, at least not at first. Where allowed, games would be played in home stadiums. But teams would only play against teams in their divisions, plus regional interleague rivalries; e.g. National League Central teams can play American League Central teams.

In a move sure to upset some National League purists, all teams would use the designated hitter to reduce the risk of pitcher injuries. Meanwhile, the playoffs would be expanded from five teams in each league to seven. Active rosters would also be expanded, to 30 players plus a 20-man taxi squad, since Minor League Baseball could effectively be cancelled this year.

The baseball players union and the owners are currently negotiating the plan. The economics are sure to be a sticking point. The owners are considering a 50-50 split of revenues from this season with the players, while the players say they’ve already agreed to a prorated salary structure (in the case of an 82 game season, they’d receive around half of their contracted 2020 wages). Since gate receipts reportedly account for anywhere from 30-40% of baseball’s overall revenues, a 50-50 split of revenues from a shortened season with no fans will almost certainly result in a significant pay cut for the players.

Economics aside, the plan has other potential complications. Los Angeles County, for example, has signaled that stay-at-home orders could last for another three months — so what do the LA Dodgers do? Canada requires a mandatory 14-day quarantine for asymptomatic travelers returning to the country. So can the Toronto Blue Jays play home games? The team could play at its spring training facility in Dunedin, Florida, though that plan would increase the travel burden for many American and National League teams in the eastern divisions based in the Northeast, New England, and Mid-Atlantic.

“This plan sounds possible,” says Lee Igel, clinical associate professor at the Preston Robert Tisch Institute for Global Sport of the NYU’s School Of Professional Studies, and member of an advisory panel consulting mayors on the safe reopening of sports and recreation. “But when you start to lay things out, you hit natural stopping points where you go, ‘oh, wait a minute here.'”

Testing is the key sticking point. “I think a plan like this would have to be paired with daily testing,” says Zachary Binney, an epidemiologist at Emory University in Atlanta. “I really don’t see how you can even begin to talk about something like that being done safely with testing any less frequent than that.”

Sports events like the UFC take place intermittently, in one centralized arena. NASCAR races are weekly, at a specific track. So it’s easier to test for COVID-19 in UFC and NASCAR. But baseball is a daily activity, taking place in up to 15 different facilities across the country, plus Canada. Each team has dozens of players, coaches and support staff. Daily testing will require a considerable investment in a country that’s already falling short of requirements to safely reopen — The Harvard Global Health Institute says the U.S. needs to be conducting 900,000 tests per day; President Donald Trump said Monday the U.S. is only doing 300,000 tests daily. Any tests given to players in the interest of restarting a season risks resulting in fewer tests for others. “The problem is going to be, will there be enough testing available for the general public?” says Jill Weatherhead, infectious disease specialist at the Baylor College of Medicine. “Will there be enough testing to allocate to sporting events to keep the players safe?”

Players will also be returning to their homes from the ballpark, increasing the risk that they might carry the disease from the locker room to their communities, and vice-versa. And though the MLB plan strives to cut down travel as much as possible, teams will still have to shuttle from city to city. “It’s going to potentially be an awful lot of moving people from areas that are hotter with virus to areas that have fewer cases,” says Binney. “So how are the areas with fewer cases going to feel about that? You raise the risk of possibly seeing epidemics in new areas.”

Washington Nationals relief pitcher Sean Doolittle took to social media to express skepticism about the return plan. “It feels like we’ve zoomed past the most important aspect of any MLB restart plan: health protections for players, families, staff, stadium workers and the workforce it would require to resume a season,” he wrote on Monday, introducing a Twitter thread worth reading in its entirety. “It feels like the conversation about an MLB restart has shifted to the economic issues and that’s really frustrating,” Doolittle wrote yesterday. “Until there’s a vaccine, let’s focus on keeping everyone as safe as possible & minimizing the risks so we can play baseball.”

Discussions between baseball’s players and owners will continue despite the ongoing pandemic and the uncertainty it brings. “We’re not seeing massive declines across the country,” says Weatherhead. “To make predictions and plan what is going to happen on July 1 is not possible.”

The benefits of baseball’s comeback can’t be discounted. Playing ball would offer quarantined fans, many already struggling economically or otherwise, welcome psychic rewards. Even without fans, baseball would offer communities a financial lift: gameday jobs are at stake. Not to mention the symbolic importance of the return of America’s pastime. Some pre-pandemic normalcy would be awfully nice to recapture.

Any plan, however, is at the mercy of how the virus acts across dozens of MLB markets. “There are no good answers here,” says Binney. “You’re taking on a lot of risk with this plan.” 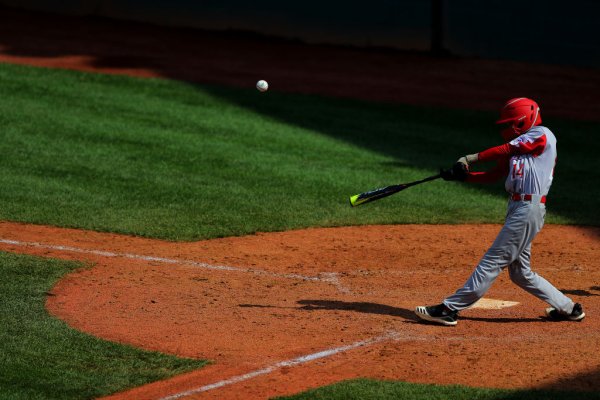 Youth Baseball Teams Playing This Weekend, Despite Warnings
Next Up: Editor's Pick