In Trial by Media, a true crime documentary series from Netflix out May 11, filmmakers revisit six court cases that captured national attention, becoming real-life legal dramas. Each installment in the series, whose executive producers include George Clooney and Jeffrey Toobin, examines flashpoints in broader social issues, from police brutality to sexual assault to political corruption, and how press coverage of each case influenced collective attitudes and the criminal justice system at large.

The stories explored in Trial by Media span wild and tragic moments in American history throughout the 1980s, 1990s and early 2000s. Each episode looks into the media’s role in publicizing the case—and how they ultimately shaped general views of crime, often for the worse. Here’s what to know about the cases at the center of Trial by Media.

Amid the heyday of daytime television talk shows in the 1990s was The Jenny Jones Show, which is the focus of Trial By Media’s first episode. In 1995, a man named Scott Amedure appeared on the program to tape an episode about “Same Sex Secret Crushes.” During the episode, which never aired, he told another man, Jonathan Schmitz, that he liked him in a surprise confession. After the taping, Schmitz killed Amedure, claiming it was out of embarrassment over what happened on the show. The case that arose from Amedure’s murder called into question the ethical responsibilities of talk shows, with Amedure’s family arguing that The Jenny Jones Show bore some responsibility for his death.

Schmitz was sentenced to 25 to 50 years in prison in 1996 and was released in 2017. The Jenny Jones Show remained on air until 2003. Although Amedure’s family successfully sued the show, with a ruling granting them $25 million from the program, that ruling was later overturned.

The story of Bernhard Goetz, a white man who rose to notoriety in 1984 after he shot and wounded four black men in a New York City subway car, comes to foreshadow many other incidents of racist violence whose perpetrators claimed a “vigilante”-like self-defense. Goetz shot the men after they approached him on the train and asked him for money; he said he presumed they were going to mug him and that he acted out of a fear of being attacked. Goetz, as Trial by Media shows, immediately gained support throughout the country, and was dubbed the “subway vigilante,” while the motivations of his victims came under scrutiny. Eventually, Goetz was acquitted on charges of attempted murder and assault, and only found guilty for carrying an unlicensed firearm.

Years before the Black Lives Matter movement called attention to police violence against people of color, the murder of Amadou Diallo, an immigrant from Guinea, sparked outcry in New York City. Diallo was killed in 1999 while in a vestibule outside his apartment building when New York City police officers mistook his wallet for a gun. Officers said they thought Diallo matched the description of a rape suspect. He was shot 41 times, inciting outrage throughout the city over racial profiling and police brutality. Diallo’s mother, Kadijatou Diallo, emerges in Trial by Media as a central figure who pushed for justice in the wake of her son’s death. The police officers, charged with second-degree murder, were later acquitted in a trial.

In a rape case that became known as “Big Dan’s” trial, national attention turned to New Bedford, Mass., after a woman was gang-raped in a local bar by four men in front of onlookers in 1983. The ensuing trial, in which the woman was roughly cross-examined and victim-blamed, prompted discussion over how sexual assault victims should be treated and protected in the wake of crimes. Six men were arrested in connection with the case; of those, four men were charged with and convicted of aggravated rape.

The woman, who was identified as Cheryl Araujo during the course of the trial, left New Bedford, where she had become an outcast, and moved to Florida, as the docuseries shows. The mother of two died in 1986, at age 25, in a car accident.

Former CEO Richard Scrushy gets caught for money-laundering and fraud

Another episode of Trial by Media looks into the life of former HealthSouth CEO Richard Scrushy, who, facing charges of fraud and money laundering, began hosting a Christian talk show with his wife as part of his defense tactic. The episode tracks the uber-wealthy Scrushy as he becomes a televangelist within a community of black churchgoers in Birmingham, Ala.

While Scrushy was at first acquitted the charges of fraud brought against him, he was later indicted by a federal grand jury on counts of extortion, money laundering, bribery and more and sentenced to prison in 2006 along with former Alabama Gov. Don Siegelman. In 2012, Scrushy was released from prison.

Trial by Media closes on the case surrounding former Illinois Gov. Rod Blagojevich, who fell from grace in 2008 after being arrested for ties to a corruption scandal. Among many charges, including attempted extortion and lying to federal agents, Blagojevich notably tried to sell the vacant senate seat of then-President Barack Obama. The series’ final episode follows Blagojevich as he goes from a politician with a bright future to a national punchline, to an extent that began to overshadow his prior crimes. Blagojevich served eight years of a 14-year prison sentence before President Donald Trump granted him clemency in February 2020. 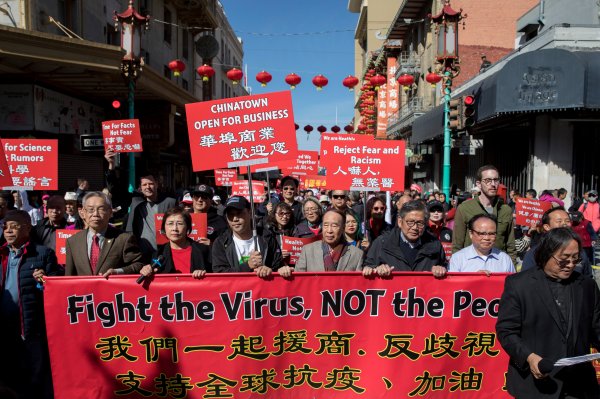 A History of Violence Against Asian Americans
Next Up: Editor's Pick