Dr. Zeena Salman breaks her fast with her husband and two children during the holy month of Ramadan this year.
Dr. Zeena Salman
Ideas
By Zeena Salman
Salman is a Sudanese-American pediatric oncologist and consultant to St. Jude Children's Research Hospital.

Salman lives in the West Bank with her husband, Steve Sosebee—founder of a medical relief NGO called the Palestine Children’s Relief Fund—and two children, aged two and 13. Salman spoke to TIME about what the holy month of Ramadan has been like under lockdown in the Palestinian territories.

We live in the Holy Land, in Ramallah, right next door to a mosque. The mosques are all closed now, although we hear the call to prayer throughout the day. But this time the words bellowing from the loudspeaker are different and it strikes me every single time I hear them. Instead of saying come to prayer in Arabic they say pray in your homes. The call to prayer is something I’ve heard for my entire life and it’s so innate for Muslims. The first time I heard this new version I got goosebumps because I thought—wait, you can’t change that.

The Palestinian territories are already dealing with occupation by Israel, three generations worth of people living in refugee camps and now we also have the coronavirus pandemic to consider.

We just don’t have the resources to be able to cope if the coronavirus were to spread widely. There are only about 100 ICU beds in the entire West Bank and not enough ventilators, either. That’s probably why the government acted quickly and aggressively. Shortly after an outbreak among a group of religious tourists and hotel workers in Bethlehem, authorities moved to shut down the entire West Bank, shuttering both schools and workplaces.

Luckily, we seem to have been relatively spared so far. The government here mounted a better response than the U.S. It’s strange to see the difference between the two places when usually the health disparities are the other way around. (I moved from New York City a few years ago to help strengthen health systems here.)

I’m not an ICU or Emergency Room doctor so I’m not on the frontlines of dealing with the coronavirus. But because so many facilities, including outpatient clinics, have shut down, I’ve been doing a lot of general pediatrics work to relieve some of the strain on the health care system. People are terrified to go to emergency rooms right now. The health care system here is already stretched thin even without a global pandemic. I’m working from home for the most part and doing a lot of telemedicine calls. A few times a week, I typically have to step out to see sick kids but I take precautions. I have an N95 mask and wear a pair of scrubs that I strip off as soon as I come through the door. I immediately take a shower before having any contact with the family.

This year is such a huge exception. Normally, people are breaking their fast in groups. Whether you break your fast at a mosque or in someone else’s home, there’s a collective feeling that you will be with people who have been sharing the same struggle and experience of Ramadan. I didn’t realize the importance of community during Ramadan so strongly until this year, when it has been taken away from us.

Our 2-year-old daughter is totally clueless about the current situation, but it’s the first year that our 13-year-old daughter is aiming to fast the whole month. I was low pressure about it with her but she’s taking the initiative on her own, saying that she wants to fast and asking what time she needs to wake up for the pre-dawn meal. It hasn’t been easy. It’s hot here. Being at home without distractions could be tougher on her since she can’t talk about fasting with her friends as often as she would if she were still in school.

Still, when we hear the call to prayer going off next door to us we all gather around a table. Our troubles melt away once we’ve had that first bite of food or that first sip of water.

I met my husband in 2013 at a fundraiser in the U.S. for his NGO [Palestine Children’s Relief Fund]. It turns out he had just built a children’s cancer hospital in the West Bank that same year. I started doing medical missions and visiting the Palestinian territories once or twice a year and then we got married and I moved with him to the Palestinian territories in 2016.

When the lockdown in the West Bank began, my husband and I considered returning to our home in the U.S. since we were both largely working from home and schools were out. But we made a conscious decision to stay. We know the health systems here are weak. We recognize that we have a responsibility here. We both work within the health care system. We’re lucky to be healthy and employed. We felt if we had anything to offer, we should offer it. 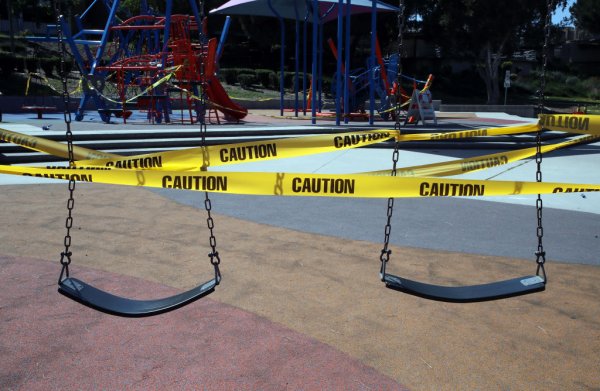 How COVID-19 Created a Childcare Catch-22
Next Up: Editor's Pick