Michelle Obama Deserves More than the Worshipful Gaze of Becoming

Circa 2013, my ex-husband acquired a shopping tote, made of recycled materials, that he would not give me no matter how much I begged. It featured an image of Michelle Obama, in a floaty red dress and high heels, smiling at the world while riding high on a swing. A bevy of cartoon butterflies and rabbits looked on admiringly. The words Mighty Michelle were spelled out on celebratory ribbon at the top; the slogan at the bottom, unnecessary yet awesome, read First Lady of Fabulous.

The First Lady of Fabulous tote bag was not an official product, but it was definitely an astute one. Seemingly everyone who saw it wanted it. Though not everyone loves Michelle Obama, sometimes it seems that way. That’s also the sense you get from Becoming, Nadia Hallgren’s documentary about Obama’s arena-filling 34-city book tour, produced for Netflix by Michelle and Barack Obama’s Higher Ground Productions. There are many, many shots of audiences gazing adoringly at the former first lady, clearly unfazed by the size of the auditorium they’re packed into; they’re captivated by her as she sits there on a far-away stage, answering with dazzling grace the questions posed by any one of the tour’s revolving moderators. (They included Gayle King, Valerie Jarret, Stephen Colbert and Oprah.) Her manner is both polished and candid, a mode she perfected, out of necessity, during two terms of White House life. It’s all perfectly grand and inspiring. But it’s also everything you expect from an authorized documentary about Michelle Obama.

The big problem with Becoming is that of all the people who don’t need a hagiography, Obama is pretty much tops on the list. That’s not to say she hasn’t had, and doesn’t have, her enemies: In one sequence, she details how much it hurt when the press picked apart her every move, in the early days and beyond; the accompanying Fox News clips, some of them stretching to characterize her as an “angry black woman,” are enraging, even when you consider the source. But Obama deserves so much more than the worshipful glassy gaze of this documentary; she’s so far beyond it that it can barely contain her. In Becoming, watching her in action as she promotes her memoir, you see a master showperson at work—until you realize that at some indistinguishable point, she’s stopped playing to the crowd and started speaking to it. The glissando segue between the two would be a miracle to behold, if only you knew exactly when and how it had happened.

That’s the reason to watch Becoming: For the everything in between, for all the things the camera captures when the filmmaking is looking the other way. In addition to the huge stadium Q&A’s mounted to promote the memoir, the Becoming tour also gave Obama the chance to speak to groups of young women at community events. In these settings, she shines. At one point a young woman who is, as she explains, the first person in her family to go to college, states her frustration that African Americans are often made to feel invisible. “How did you, as a black woman, persevere through invisibility?” Obama had a ready answer, and perhaps not exactly the one the young woman expected to hear. “For me, I never felt invisible,” Obama says, explaining that part of that may have been due to her upbringing, at the hands of parents who would let her ask anything at the family dinner table. Then she broadened her response into something profoundly useful. “That invisibility? It starts here,” she says, pointing to the area around the heart. “We can’t afford to wait for the world to be equal to start feeling seen…. You’ve got to find the tools within yourself to feel visible, and to be heard, and to use your voice.”

Obama won’t countenance the too-convenient language of victimhood, though when she hears it, she’s careful to respond with kindness. It appears that she sees her job as being the assistant, not the mechanic: She can help you with the tools, but she can’t do the job for you. At the same time, she’s acutely aware of the ground she and her husband broke. At one point she says flatly, “I am the former first lady of the United States and also a descendant of slaves.” During a public appearance, she acknowledges how hard it is “to be the first black anything.”

The best parts of Becoming are the moments when Obama is caught relaxed and off-guard. She’s funny, and not without vanity. She likes nice clothes, and seems relieved that she’s now free to enjoy them a little more, without having to worry constantly upon her image. Upon moving the family into the White House, she insisted that Malia and Sasha make their own beds, even though there were servants ready and willing to do so. When they protested that she, too, ought to make her own bed, she put a fresh spin on the classic because-I’m-the-mommy answer: “I’m like, I’m the first lady, and I have the degree!” On the book tour, one young woman is so excited to meet her that she starts hyperventilating, and Obama puts her at ease: “Don’t make me cry! I just got this face done!” Her stylist, Meredith Koop, describes the outfits Obama is drawn to. “She is not a minimalist,” she says definitively, holding aloft a sharply tailored blush-pink jacket with a spray of rhinestones across one shoulder. “When I look at this suit, I do see Elvis,” Koop says, “and I don’t have a problem with that.”

Yet Obama’s seriousness about the state of our country, and how we got here, is never in doubt. Discreetly, and probably wisely, she says nothing about the ascendance of Trump, except for this: “A lot of our folks didn’t vote. It was almost like a slap in the face.” No one gets a pass from Obama. “I understand the people who voted for Trump,” she says at one point. “The people who didn’t vote at all—the young people, the women, that’s when you think, man, people think this is a game.” She goes even further: “Not just in this election, but every midterm. Every time Barack didn’t get the Congress he needed, that was because our folks didn’t show up. After all that work, they couldn’t be bothered to vote at all. That’s my trauma.”

And then, just moments later in the film, she goes back to being sparkling Michelle, visiting with a group of church ladies. One of the more elderly members of the group speaks of her amazement at seeing the first black family in the White House, something her own parents and grandparents could hardly have imagined. “You saw it for them,” Obama says, coming up yet again with exactly the right thing at the right time, with lustrous warmth. It’s moments like these, and even smaller ones—the way, during a visit to the house Obama grew up in, we get a glimpse of an old Raggedy Ann doll whose face is made of brown cloth, not white—that make Becoming feel like a vigorous film trapped inside a workaday one. The Obamas, both Michelle and Barack, were and continue to be pragmatists who nevertheless acknowledge the scope of dreams—and if it’s hard to be the first black anything, it’s also hard to be that. Now, at nearly the midpoint of 2020, the Obama White House feels so far away that it barely seems like a historical reality; it’s more like something that took place on another planet. Becoming reminds us that the Obama White House happened on this planet, in this century, and that one of the people who helped shape the life of that era, both inside and outside of that house, was a woman who insisted that her kids make their own beds, even as she allowed herself the luxury of letting someone else make hers. As the First Lady of Fabulous, she had earned that right. Even if Michelle Obama no longer lives in the White House, its walls know her story. Elvis has not left the building. 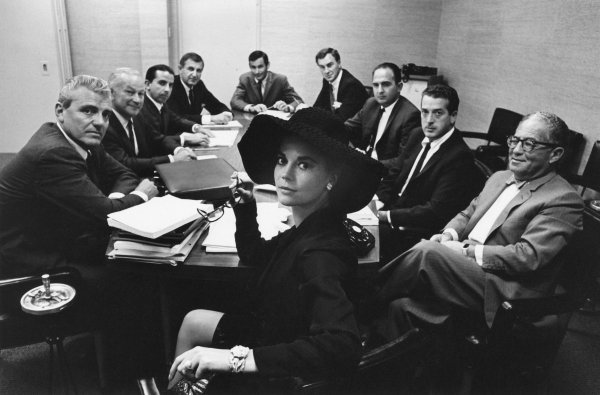