If you thought 2020 couldn’t get any worse, Asian giant hornets have appeared in the United States for the first time.

Asian giant hornets, which some researchers refer to as “murder hornets” according to the New York Times, had never been seen in the U.S. until December, when the Washington State Department of Agriculture (WSDA) verified four sightings of the hornets near Blaine and Bellingham, Wash. Canada also reported sightings of the insects in British Columbia the fall of 2019, per the WSDA.

Asian giant hornets are the largest species of hornet in the world. They attack and destroy honeybee hives, entering a “slaughter phase” where they literally decapitate bees and take the hive as their own, using the thoraxes from the dead bees to feed their young, according to the WSDA. Just a few hornets can decimate a honey bee hive in a number of hours.

If the hornets continue spreading through the state, officials worry they could have a devastating effect on Washington state’s — and the U.S.’s — bee population. The many crops that rely on bees for pollination would then be seriously affected. Officials don’t know how the insects got into the U.S., but they’re bracing for the hornets to start emerging soon, as they become active in April, according to a press release from Washington State University (WSU). The hornets are at their most destructive in late summer and early fall, per the release.

“At this time, Washington State Department of Agricultural has implemented an aggressive outreach and trapping campaign,” Rian Wojahn, the eradication coordinator for the WSDA, told TIME in an email. “Local beekeepers and other agencies are also helping get information out and using our trapping protocols to deploy traps.”

Wojahn said that while it’s unknown how much damage the hornets could do to the U.S. honeybee industry, a similarly invasive hornet in Europe ended up reducing beehives by 30 percent and honey yield by up to two-thirds. The WSDA will implement “an aggressive eradication campaign this summer,” he continued.

Asian giant hornets are usually 1.5 to two inches long, have black and yellow stripes on their abdomen, and have a large orange or yellow head, according to the WSDA. They don’t usually attack people or pets, but might if they are threatened, the WSDA continued. Their stingers are longer than a honey bee’s, more toxic and they can sting multiple times. Multiple stings can also kill a human even if they’re not allergic, according to the WSU release. The New York Times reports reports that in Japan, the hornets have been known to kill up to 50 people a year.

The WSDA Pest Program is working to find and destroy the hornets become they can spread throughout the state. “Don’t try to take them out yourself if you see them,” WSDA entomologist Chris Looney said in WSU’s press release. “If you get into them, run away, then call us! It is really important for us to know of every sighting, if we’re going to have any hope of eradication.”

Amid the global coronavirus pandemic, the news of the hornets in Washington state was the last straw for some, who took to the internet to express their dismay over how 2020 has gone so far.

If you live in Washington state and think you’ve seen an Asian giant hornet — or the evidence of a hornet attack — the WSDA says you should report it right away. You can use this the Hornet Watch Report Form, call 1-800-443-6684 or email PestProgram@agr.wa.gov.

You can watch Looney’s full webinar on the hornet’s presence in the Pacific northwest below. 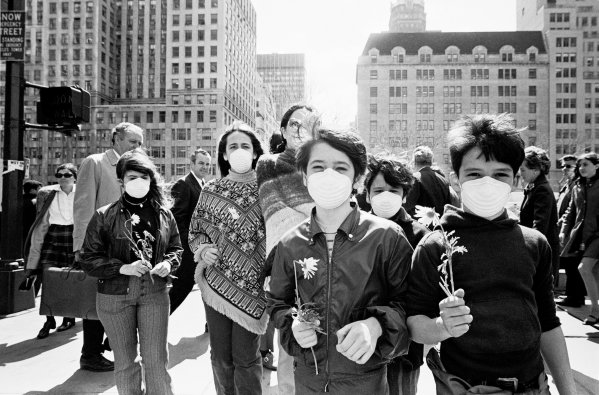 50 Years After the First Earth Day, a Planet Still in Danger
Next Up: Editor's Pick