Netflix's Teen Dramedy The Half of It Is Sweet, Funny and Raw as a Scraped Knee

Because humans spend so much energy in pursuit of romance, we sometimes forget that platonic relationships can be even more complicated—and generally last longer too. That’s just one of the ideas thrumming beneath the surface of writer-director Alice Wu’s The Half of It, streaming on Netflix, a prickly-tender film about teenage friendship, first love and all the blurry gradations in between. It’s sweet and funny, but also, in places, as raw as a scraped knee.

Ellie Chu (Leah Lewis) is a straight-A student living in a dull town in the Pacific Northwest. She has a great, dry wit, but she doesn’t really have any friends, maybe because she’s managing so much anxiety at home: her father (Collin Chou) earned an advanced engineering degree in China, but in the States, where he moved his family when Ellie was small, his imperfect English has held him back. He’s also, it seems, still numb with grief—his wife, Ellie’s mother, is dead, and he spends his days watching movies like Casablanca and His Girl Friday as a way of improving his English, though it’s clear they simply give him solace.

Ellie holds together this little family of two, writing papers for her fellow students at $20 a pop. “It’s an A or you don’t pay” is her motto. She’s so good at this academic sleight of hand that a classmate she barely knows, Paul Munsky (Daniel Diemer), a charming but awkward jock who works part time in his family’s sausage business, approaches her to write a love letter for him, Cyrano de Bergerac–style. The object of his affection is the prettiest and nicest girl in school, Aster Flores (Alexxis Lemire), a deacon’s daughter who’s sensitive and bookish, with a flair for art.

The complication is that Ellie herself has a crush on Aster. She at first refuses to help Paul, but relents when she needs $50 to pay the electricity bill her father has neglected. The letters she writes under Paul’s name—augmented by a series of ghostwritten text messages—are so effective that they almost get him what he wants, though they also expose his own underlying insecurities.

What’s wonderful about The Half of It is the way it respects everyone’s insecurities, without letting its characters get away with their biases. Ellie feels like an outsider, perhaps not so much because she’s a person of color in a mostly white town but because she’s so much smarter than everyone else—and also happens to be gay. She and Aster, through those letters and texts ostensibly written by Paul, connect over art and books. But Aster, so lovely that you can’t imagine she’d have a care in the world, reveals that because of how the world perceives her, she feels lumped into a group where she doesn’t belong: “I’m like a lot of people—which makes me kind of no one.”

That line, perceptive and alive, is typical of The Half of It. This is Wu’s second film: her first, worth seeking out, is the 2004 Saving Face, about a young Chinese-American woman (Michelle Krusiec) trying to navigate her closeted love life, even as her extremely homophobic mother (Joan Chen) reveals, at age 48, that she’s pregnant, with the father nowhere in sight. The plot mechanics of The Half of It creak a little; once in a while, a scene raises more questions than it answers. But the movie is so vital that that doesn’t matter much, and its young actors hit every delicate beat perfectly. When you’re young and you long to be in love, friendship somehow seems like less, even when it may be more. Yet there’s no denying that love triangles hurt like hell. Why do you think their points are shaped like arrows? 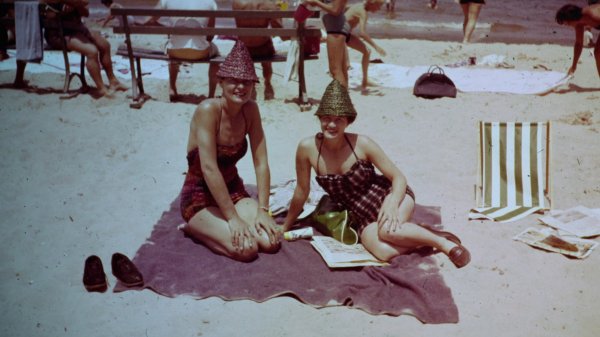 New Doc A Secret Love Is a Heartfelt Triumph
Next Up: Editor's Pick