Loneliness Is a Modern Invention. Understanding That History Can Help Us Get Through This Pandemic

Loneliness has become a “plague,” an “epidemic” or “pandemic” that afflicts young and old alike. Its intersection with another pandemic — COVID-19 — is creating widespread alarm. As working from home becomes a new norm, with schools, bars and shops closed and free movement restricted, concerns are raised about the implications of the lockdown for mental health. More than ever before, people are alone and lonely, deprived of the companionship of others, of touch and human connection. Loneliness in lockdown is easily explained by those who note that, as the much-quoted neuroscientist John Cacioppo put it, we are wired for intimacy. Humans have a biological need to be in social groups and loneliness tells us we have a physical need for human contact.

Yet this biological approach ignores the histories of the body, and emotions. It overlooks the fact that loneliness is not a universal human condition, but a historically specific one. Before 1800, loneliness wasn’t even a word in regular use in the English language. Where it was used, it meant the same as a much more common term: oneliness, the state of being alone. Trees were lonely, roads were lonely, even clouds — as William Wordsworth noted in his famous poem. But that loneliness was not the same as today’s loneliness, that disconnect between the relationships we have and those we want to have.

Sure, people were solitary before the 19th century. And solitariness could be excessive, making people obsess and fantasize about strange things, as Robert Burton’s Anatomy of Melancholy (1628) put it. Few people lived alone, or in towns and cities. Some people did live in deliberate spiritual isolation — since Paul of Thebes in the third century, religious hermits secluded themselves in deserts and forests — but they weren’t lonely. And nor was the eponymous Robinson Crusoe, cast adrift for years on a desert island in Daniel Defoe’s 1719 novel. Why?

This is not word play. The history of emotions is a well-established academic field that traces how emotions have changed over time, as well as the language used to describe them. For loneliness to exist, two things are needed: a lack of meaning in one’s relationships (or lack thereof) and a sense of the self as separate from others. In pre-modern society, religion gave meaning to all existence, and there was less emphasis on the uniqueness of the individual. As the poet Alexander Pope put it, “God and nature link’d the gen’ral frame/And bade self-love and social be the same” (Essay on Man III, 1731). For good and ill, an invisible hand had the wheel. When the 18th century shopkeeper and diarist Thomas Turner’s wife died and his friends abandoned him, he was ”worn to the grave with trouble,” but he was not lonely. And how could he be? God was always there.

By the next century, modernity had brought uncertainty as well as freedom. Yes, religion continued, but changes in social life, economic structures and philosophy created new ways of looking at the world — and our place in it. Religious conviction had been challenged since the 16th century, but scientific medicine did away with the certainty of the soul. Urbanization disrupted traditional communities and created physical distance from (and competition with) others. Economic individualism was justified by Darwinian ideals about the survival of the fittest. Existential philosophy searched for meaning without God.

This is the historical context in which the language of loneliness was invented, and it has subsequently been maintained by neoliberal policies. Research has found that individualistic nations (the U.K., the U.S., and much of Europe) until recently reported the highest levels of loneliness, by contrast with so-called collectivist cultures (Japan, China, Brazil). These patterns are changing with globalization, as consumerism and loneliness become more widespread, especially for the young.

Understanding this emotion as a product of history, rather than an automatic biological response, allows us to consider more nuanced solutions to lock-down loneliness. This is important because loneliness is not a single emotion. It contains many different emotional states, from anger to sadness, from jealousy to resentment, from grief to hope. An elderly man whose peers have been lost to COVID-19 will experience a different quality of loneliness than a single mother who is juggling work with looking after four little children who treat her body as an extension of their own. Structural loneliness — especially chronic loneliness that is caused by poverty, infirmity, disability and illness — is not the same as existential loneliness, characterized by a yearning for others, or more typically a significant other.

With that in mind, tailored interventions are critical — as is recognizing that loneliness is not always negative. In history, artists and writers like Virginia Woolf and May Sarton have harnessed not just solitude, but the aching pain of loneliness, in order to create. There is privilege in that kind of loneliness. Yet, as someone who studies loneliness, since the lockdown I have received many emails from people celebrating the joy of the doorbell that does not ring. And companionship is not just about touch; our connection to the world and to others includes a wide range of senses, including touch, smell and taste. Maybe that’s why so many people have turned to baking bread.

We can’t tackle lockdown loneliness without tending to these complexities. Loneliness can be short or long term, occasional or permanent. It can be as short as a shutdown or as long as a person’s life. It can be a health risk or a spur to action. But how we respond to loneliness, in others and ourselves, requires thoughtfulness and reflection. Amid all the clamor about ‘Lifting the Lockdown’ parties and headlines devoted to the desire to touch and be touched by others, we must remember how complex and diverse loneliness is. COVID-19 has exacerbated a loneliness problem that already existed, just as it highlights the socioeconomic divide. And with or without a pandemic, there is no one-size-fits-all solution.

Fay Bound Alberti is Reader in History and UKRI Future Leaders Fellow at the University of York, UK. Her most recent book is A Biography of Loneliness: The History of an Emotion. 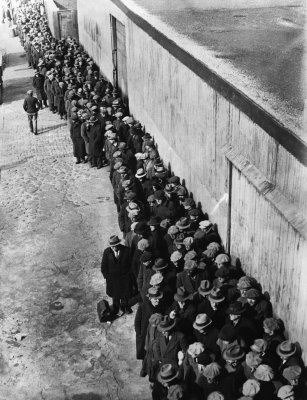 History Shows We Can't Go Back to 'Normal' After Coronavirus
Next Up: Editor's Pick