North Carolina Pet Believed to Be First Dog in the U.S. to Test Positive for Virus That Causes COVID-19 in Humans

The dog belonged to a family participating in Duke’s Molecular and Epidemiological Study of Suspected Infection (MESSI), an ongoing research study, which examines how the body responds to infection. Since the coronavirus pandemic began, the study has focused on people who may have been exposed to COVID-19, the disease caused by novel coronavirus.

“To our knowledge, this is the first instance in which the virus has been detected in a dog,” Dr. Chris Woods, the principal investigator on the MESSI study at Duke, said in a statement. “Little additional information is known at this time as we work to learn more about the exposure.”

The mother, father and son from the family who own the dog tested positive for COVID-19, according to local news channel WRAL. The father reportedly works in the emergency room at UNC Hospitals and the mother is reportedly a pediatrician.

The mother, Heather McLean, told WRAL that their pet pug had showed some symptoms, explaining, “Pugs are a little unusual in that they cough and sneeze in a very strange way. So it almost seems like he was gagging, and there was one day when he didn’t want to eat his breakfast, and if you know pugs you know they love to eat, so that seemed very unusual.” McLean’s son Ben told WRAL that “(The dog) licks all of our dinner plates and sleeps in my mom’s bed, and we’re the ones who put our faces into his face. So, it makes sense that he got (coronavirus).”

The family’s cat and other dog were also tested, but only the pug (named Winston) tested positive, according to WRAL. Don’t worry — the family told WRAL that Winston was only sick for a few days and is doing fine.

Winston is not the first animal in the U.S. to test positive for the virus. On April 22 the U.S. Centers for Disease Controls and Prevention (CDC) diagnosed two pet cats with SARS-CoV-2, and on April 5 a tiger in the Bronx Zoo was diagnosed with the virus. Back in early March, Hong Kong health officials also announced that a pet dog had tested positive for the virus in what was “likely [a] case of human-to-animal transmission.”

Still, experts say you shouldn’t worry about contracting the virus from animals. The CDC says there’s currently no evidence that animals “play a significant role” in spreading the virus and “the risk of animals spreading COVID-19 to people is considered to be low.” Instead, it appears that people can spread it to animals in certain circumstances.

But, to be safe, the CDC still recommends you “treat pets as you would other human family members — do not let pets interact with people or animals outside the household.” And if a family member is sick, “isolate that person from everyone else, including pets.” The CDC recommends keeping cats indoors when possible and walking dogs on a leash, making sure to stay at least 6 feet away from other people and animals. It also suggests avoiding dog parks or other public areas where people and dogs typically interact. 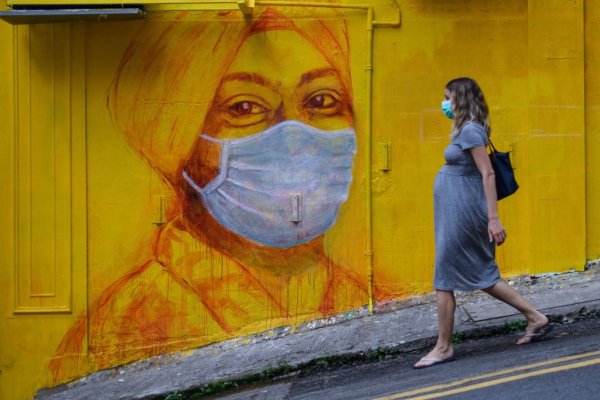