View of the Chernobyl Nuclear power after the explosion on April 26, 1986 in Chernobyl, Ukraine.
Gamma-Rapho via Getty Images
By Yair Reisner

On May 2, 1986, while visiting my long-term colleague and friend Richard O’Reilly, the head of bone marrow transplantation at Memorial Sloan Kettering Cancer Center in New York, I received a strange phone call. It was from Richard Champlin, who worked at the Bone Marrow Transplant Center at UCLA. He tended to speak very fast, so it took me some time to understand from his over-excited voice that he was about to leave the next day for Moscow.

He was headed to perform bone-marrow transplants on an unknown number of survivors of the Chernobyl nuclear disaster, which had taken place a few days earlier, on April 26. Robert Gale, the head of the UCLA program, was already there. And, Champlin told me, they wanted me to join them.

The Chernobyl survivors had been exposed to radiation from the damaged reactor. Because the bone marrow is our site for daily blood cell production, the blood-cell progenitors residing in the bone marrow are constantly dividing. In general, dividing cells in our body are more sensitive and prone to die upon exposure to radiation. Thus, exposure to high doses of radiation is associated with failure to maintain the blood system, a possibly lethal condition that can be corrected by bone-marrow transplantation.

My experience with bone-marrow transplants was based on treating children with immune disorders (“Bubble children”) and leukemia patients, but the Chernobyl team knew that I had developed a method to “clean” the marrow so that transplants could be done without a perfect match between donor and recipients—something that would be useful in the aftermath of the disaster. Not long after that first call, I received another, from Bob Gale in Moscow, who explained to me in no uncertain terms that the Russians wanted me to join the team, and that he and the Russian health minister would wait for me upon landing and get me through immigration even without a visa on my Israeli passport, and despite the fact that the Soviet Union had ended diplomatic relations with Israel in the 1960s.

I happily agreed and immediately began to prepare, heading to the airport a few days later with 20 crates of supplies and reagents arranged by O’Reilly and his team over the weekend. As we were working hard on organizing the equipment, a man arrived from the Israeli Embassy and asked to speak with me. He told me that from the moment I land in Russia I must keep my eyes open. I was too preoccupied with the arrangements to worry, but undoubtedly his words of warning seeped into the fertile ground of my childhood fears, which fed on Cold War espionage films and harrowing tales about life beyond the Iron Curtain. Nevertheless, the next ten days demonstrated the value of international medical cooperation in moments of crisis, even when politics might make success seem impossible.

As promised, when I landed at the airport on May 6, Bob Gale was there to meet me, with the Russian Health Minister, who was all smiles. We swept past passport control and customs, and not long after we were on our way to Hospital No. 6, where the worst-affected radiation patients from Chernobyl, most of them firemen who were sent into the damaged reactor to stop it from collapsing, were transferred after the disaster.

My first impression of Hospital No. 6 was extremely grim. I will never forget the horrid smell that hung over the place, a mixture of Lysol and another acrid, unfamiliar smell. The hospital grounds were surrounded by soldiers in fading work clothes; next to them was an outdated kitchen tent and beyond I could see everywhere cracked outer walls and peeling plaster. At the entrance to the hospital we were greeted by Dr. Baranov, the chief hematologist. We were shown into a room on the third floor where stood an old laminar flow hood, required for sterile work. This is where I was to set up my lab, and the only centrifuge in the hospital would be moved there. At my hotel that night, the enormity of my task was too much to bear and I could not fall asleep. In the past I had performed the procedure of cleaning bone marrow dozens of times, but never under such conditions as I found in Moscow.

The next day, after breakfast, I met a man named Stefanov, who was to become my personal minder. He introduced himself as a medical doctor, and I soon began to suspect he was also there to keep an eye on me for the Soviet government. He helped me unpack all of the cartons of equipment, assisted by a friendly young doctor who knew enough English to understand me, whose name I believe was Tanya. By the next day, we were ready to attempt the first transplant. The procedure for cleaning bone marrow usually takes about ten hours, but the first transplant took twelve as I had to spend a lot of time instructing Tanya, who was extremely talented and good-natured but new to the work. Stefanov, meanwhile, who didn’t know what to do with all his spare time while we were working, prepared for us a variety of pierogi in the small kitchen at the end of the corridor. Though he may have been there to follow me, I learned much from him as well, about life in the USSR and the Soviet regime for which he worked—long, idle hours will loosen any man’s tongue.

By May 11, we had performed the fourth and last transplant, under Tanya’s capable hands while I supervised. Everything went as planned but we all knew that the chances of success were very low since the patient had suffered from severe infection before the transplant—indeed, unfortunately, the patient passed away before there was any chance for the new bone marrow in his body to take effect. This last transplant brought to a close my part, which was dedicated to the treatment of four patients receiving mismatched bone marrow; the other six had matched donors. In the evening, we went out to the Bolshoi to watch a performance of Don Quixote. The experience was one of sumptuous elegance, in a magnificent palace with champagne glasses in the intermission. It was a striking contrast to the heavy and anxious atmosphere at the hospital. The next day, I visited the Kremlin and in the evening I attended a concert at the Conservatorium. Our hosts were trying very hard to reward us for our hard work, but still the contrast was extremely jarring.

On May 15, after the operation, there was held a large press conference with journalists from all over the world, among whom we met Walter Cronkite and Peter Arnett. I was told there was going to be a short announcement to the press in Russian, which would include a brief mention of my affiliation with Israel’s Weizmann Institute of Science. Only many days later I realized how naïve I was to believe that. A Russian-speaking acquaintance of mine who followed Pravda translated the press release, and told me that, while the press release mentioned that Dr. Champlin and Dr. Gale were American, there was no mention of the fact that I was from Israel or where I worked.

The next day’s farewells were very emotional. Tanya gave me, on behalf of everyone at the hospital, a Russian wooden spoon and a small samovar. Stefanov took me for a last trip out to Lenin Hill overlooking the city. And the return home was just as exciting as my ten days in Moscow. I was amazed by the many reporters who greeted me at the airport. I had no idea how much exposure the story about my strange adventure to perform bone marrow transplants during the height of the Cold War had received in the media.

Many years have passed since that transplant expedition to Moscow in May of 1986. Three years later we published the results of those transplants in the New England Journal of Medicine. It is interesting to note that the only two patients who survived were among those four who did not have a matching donor and who therefore received a transplant of cleansed bone marrow. Of course, it is very difficult to draw any conclusions from such minimal data, but this remains a contentious and thought-provoking topic in the bone marrow transplant community. We also gained insight into how to treat patients who had been exposed to high levels of radiation; medical knowledge in that field has only expanded since then.

But during the current global pandemic, another lesson of those ten days in Moscow may be even more important. Medical and scientific collaboration took place across borders even at the time of the Cold War—and if we could do it then, it should still be possible today.

Yair Reisner is Professor Emeritus of Immunology at the Weizmann Institute of Science, where he worked from 1981-2018, serving as the head of the Immunology Department between 2005-2014. Upon his retirement In 2018, he established an active group at MD Anderson Cancer Center and he serves as the head of stem cell research in the department of stem cell transplantation and cell therapy, headed by his long term colleague and friend from the Moscow days — Dr. Champlin. 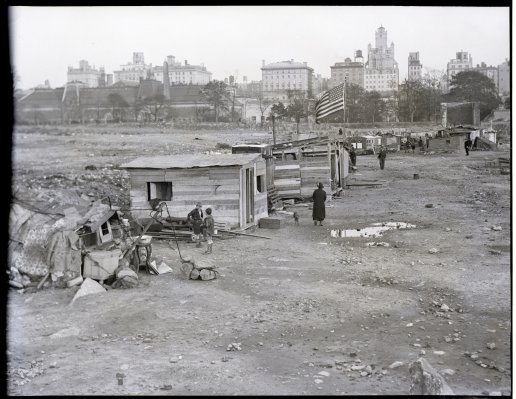 The Great Depression's Lesson for America's Housing Crisis
Next Up: Editor's Pick