A usually busy Main Street in Livingston, Montana after Governor Steve Bullock order the closing of restaurants, bars, and theaters on March 20 in response to the coronavirus pandemic.
William Campbell — Corbis via Getty Images
By Tara Law

Thuy Petersen never expected to start a small business during a pandemic. Just a few months ago, she was focused on opening her company — a children’s play and learning space called House of Playful Soul in Forest Hills, Queens — and taking care of her newborn.

But her plans, like those of so many across the world, were upended by the COVID-19 outbreak. After the 39-year-old entrepreneur spoke to a friend who’s an emergency room doctor at nearby Elmhurst Hospital — a coronavirus hotspot — she decided to temporarily close her business just a week after it opened, in order to help keep her community safe.

Petersen says the hardest part of shutting down was letting her staff go. She knew they needed the money, and had been counting on her. “Never, never, never did I think that I’d have to let them go because we weren’t going to be open,” she says. “I purposefully spent so much time going over projections and forecasting to make sure that I could cover the employees that we were going to take on.”

She tried to apply for the Paycheck Protection Program (PPP), an emergency federal loan program meant to help small businesses keep paying their employees. But the program, which was signed into law as part of the CARES Act on March 27, ran out of money startlingly quickly, before Petersen and many like her saw even a dime.

On Friday, President Trump signed into law a measure refunding the PPP program with $310 billion in additional lending authority. The fresh funding round means small business owners like Petersen will have a second chance at getting a loan that could help them keep their companies afloat, and, crucially, pay the people who were counting on her.

Petersen fears she’s “low on the totem poll” at her bank, and will be unlikely to get any money even this time. But experts say she and other small business owners left out of the first round would be wise to try again — and the sooner they act, the better their odds of receiving help may be.

Here’s what small business owners need to know about the Paycheck Protection Program’s second round.

How do I apply for a loan through the Paycheck Protection Program (PPP)?

Small business owners who have not yet applied for the Paycheck Protection Program should apply through an eligible lender, like a local bank. The U.S. Small Business Administration (SBA) has a list of eligible lenders that you can view here.

Experts say business owners should apply through a bank with whom they have a standing relationship, like one where they have a corporate account or have taken a loan from. That’s because banks are already in overdrive helping their existing clients manage the COVID-19 crisis, and may be less able to work with new partners. Banks must also vet new customers, which takes time.

“There will be some banks out there that will accept new customers and get them into the PPP program,” says LJ Suzuki, founder of CFO Share, which provides finance and accounting services for small and mid-size businesses. But, he adds, “the vast majority of banks will not, small or large. There are just too many moving parts, there are just too many urgent issues that they’re dealing with. And they’re prioritizing their current customers.”

Is there anything different about this round of PPP loans?

The new bill is largely similar to the old legislation, but $60 billion of this round is specifically targeted at small and mid-size banks, as well as credit unions, with about $30 billion set aside for community-based lenders, including Community Development Institutions and Minority Depository Institutions. Those changes were put into place after critics of the first round said that too much money was being funneled to larger businesses, like major restaurant chains, rather than truly small companies.

Steven Hamilton, assistant professor of economics at The George Washington University, says it’s difficult to say ahead of time whether the changes in the second round will actually make it easier for small businesses to get PPP loans. But, he says, “it can’t hurt.” He adds that, now that companies with more clout have already received PPP loans, there’s reason to believe the next round will go to smaller, less connected firms. Some larger companies may also be reluctant to apply for this round of funding, given the public relations fallout facing larger companies that took PPP money (the parent company of Ruth’s Chris Steakhouse, for example, said it would return $20 million in loans after public criticism).

In updated guidance published April 23, the SBA emphasized that companies that apply for PPP loans must certify that they have a real need for the money. “It is unlikely that a public company with substantial market value and access to capital markets will be able to make the required certification in good faith, and such a company should be prepared to demonstrate to SBA, upon request, the basis for its certification,” the agency said.

The new bill also makes farmers and agricultural companies with fewer than 500 employees eligible for Economic Injury Disaster Loans, an SBA program that loans money to small businesses in crisis.

How much loan money can my small business get?

Through the PPP, businesses with up to 500 employees (and some other companies) can receive a loan for 2.5 times their monthly payroll costs, up to $10 million. The loan can be forgiven if businesses use at least 75% of the forgiven amount for payroll, and if the money is used for payroll, interest on mortgages, rent and utilities.

Small business owners who have trouble getting a PPP loan should investigate other options, too. Todd McCracken, president of the National Small Business Association, recommends the SBA’s Economic Injury Disaster Loan program, which is receiving an additional $50 billion through the new legislation and can cover expenses like payroll and rent.

“They’re not forgivable, but there’s a low interest rate and good repayment terms,” says McCracken. “So for companies that feel optimistic about their long-term future, [but] they need some help right now, a loan might make sense.”

Will this round of PPP loans meet all the demand?

Hamilton, the economics professor, says that while there’s a “huge amount of additional money available,” small business owners should know that “we don’t know if it will last.” His advice? “Get there as quickly as you can,” he says.

Hamilton adds that he believed from the beginning that the PPP’s initial $349 billion in funding would be insufficient. He estimated that covering all payrolls for businesses with fewer than 500 employees would take about $600 billion, assuming every single firm borrowed the maximum possible amount.

Even still, Hamilton was shocked when the original funding ran out in just two weeks. To him, that was a sign that PPP money is leaking away — likely, he believes, due to loopholes in the program allowing firms not traditionally thought of as small businesses to access PPP loans.

“Given that we know the set of firms is larger than we originally expected, even 600 billion in total is likely to be underfunded,” says Hamilton. “We don’t know how much it’s underfunded. It’s very difficult to know that number. The rules of the scheme are so complicated — it’s very difficult to determine exactly which firms are eligible, [and] therefore to determine how much money we’re going to need to cover all of those.”

Even substantial PPP loans may not be enough money to help some small businesses survive in the long term. The program is only intended to cover payroll costs for eight weeks, and it remains unclear how long many businesses will remain shuttered or otherwise limited amid the COVID-19 outbreak.

Some experts also say that PPP is less helpful for extremely small businesses with only a few employees, especially if they spend more on costs like rent rather than payroll.

I applied for a PPP loan during the last round, but I never received money. Do I need to apply again?

Most businesses that have already applied for PPP should not need to re-apply. However, small business owners should contact the bank they’re working with to double-check that their documents are in order and the status of their application. Any necessary changes could push applicants to the back fo the line, says Suzuki.

“A lot of the banks have maintained the order that the queue was in, and as soon as it’s signed by the President, they will start processing things again,” he says. “The people that had their applications in and were prepared last time but just got cut off early will be able to get processed without additional work.” 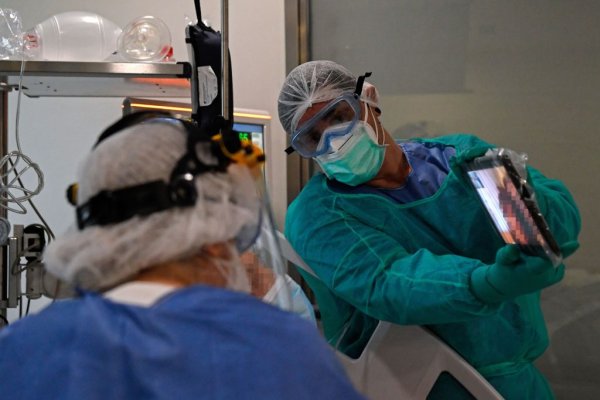 Volunteers Are Collecting Tablets for COVID-19 Patients
Next Up: Editor's Pick