TIME held its first TIME 100 Talks Thursday afternoon, featuring Dr. Anthony Fauci, John Legend, Angelina Jolie and Sen. Amy Klobuchar and others who shared their views on the coronavirus pandemic—and what makes them hopeful about the future.

Fauci spoke about a need to improve testing and be cautious about reopening up parts of the country. Legend warned about the impact of the virus on incarcerated people cooped up across the country’s prisons, as well as allowing people to exercise their right to vote fairly and safely. Klobuchar pushed for a national testing and vaccine strategy. Jolie called for protecting children and refugees who may be in vulnerable situations—stuck in abusive homes or cramped camps—as COVID-19 outbreaks continue.

Thursday’s TIME 100 Talks:Finding Hope event is the first in a new ongoing series of virtual conversations and experiences that will convene members of the TIME 100 community of the world’s most influential people, along with global leaders and experts from different fields to spotlight solutions to urgent global problems.

Here are the biggest moments from TIME 100 Talks:Finding Hope.

Dr. Anthony Fauci talks about reopening the country, testing and that #FireFauci tweet

Dr. Anthony Fauci, the nation’s top infectious diseases expert, says he worries that “there are still some gaps” in the U.S.’ testing capabilities. “We absolutely need to significantly ramp up not only the number of tests but the capacity to actually perform them,” he says. “We’re getting better and better at it as the weeks go by. But we’re not in a situation where we say we’re exactly where we want to be with regards to testing.”

The ability to contain any COVID-19 outbreak by identifying, tracing and isolating cases remains critical, Fauci said in an interview with TIME senior health writer Alice Park. “If we are capable of doing that effectively then we should feel some good confidence we can slowly move on,” Fauci says. “If we don’t have that in place we better be really careful as we move forward.”

The director of the National Institute of Allergy and Infectious Disease and member of the White House coronavirus task force also said he’s worried that some regions in the U.S. may hastily start reopening in their aim to return to normal life “as soon as possible.”

The Trump Administration’s guidelines have been “very careful and very conservative” in making sure regions pass certain “checkpoints” before they even begin loosening mitigation strategies like social distancing, Fauci says. These checkpoints include sustained declining trends in the number of new COVID-19 cases and hospitalizations. “The thing that concerns me (…) is that in an understandable quest to get back to normal as quickly as possible that there are going to be some regions, some states, some cities that might leapfrog over some of those checkpoints,” he says. The guidance, in general, is supposed to provide a path forward to a “gradual reemerging into some form of normality,” he adds.

Fauci has emerged as an authority on the U.S. response to the coronavirus, even if he doesn’t always see eye-to-eye with President Donald Trump. That’s why when the President shared a tweet with that mentioned “Time to #FireFauci,” many wondered if that was a sign of things to come. Fauci was quick to dismiss its meaning, saying, “There was no way he was going to do that because he had no intention of doing that.”

John Legend tells TIME CEO and editor-in-chief Edward Felsenthal that voting rights and criminal justice are on his mind amid the coronavirus pandemic.

Legend says he’s worried about whether people can safely vote and points to the recent primary election in Wisconsin, where at least seven people in Milwaukee may have contracted COVID-19 from participating in the April 7 election. “That should not be the sacrifice we’re asking citizens to take to exercise what is a fundamental right of them being citizens of the United States,” Legend says. He and other activists are fighting for no-excuse absentee voting, as well as early voting so “people can spread out the times during which they vote.”

Prisoners and corrections officers deserve to be safe, too, he notes. “Folks are in jails and prisons for all kinds of reasons,” Legend says. “That should not carry with it a death sentence or the potential for a death sentence by being infected with this virus because they’re so close to everyone else.” What’s more, a lot of jails in the U.S. are “filled with people who haven’t been convicted of any crime” and are locked up “because they can’t afford to (pay bail and) go home.”

Legend has long been fighting for bail reform—to dramatically reduce the use of money bail and give more pretrial protections for people accused of a crime. More recently, he has called on New York Gov. Andrew Cuomo to release nonviolent offenders and take more actions to protect people in prisons. Legend says “there could be a lot more action” taken, still.

This health crisis is merely “exposing some of the flaws in our society that already existed,” Legend says.

Doctors say we need to invest more in public health

Physician and public health advocate Dr. Leana Wen and epidemiologist Dr. Larry Brilliant say even though public health work appears to be invisible, it is essential. The coronavirus pandemic has only exposed the cracks in the health care system caused by disinvestment over the years, they say.

Brilliant says we need to funnel money to the international community and the World Health Organization too if we want to get serious about stopping pandemics.

Although Brilliant is optimistic that the U.S. can become change to be better prepared to face a pandemic going forward he is “concerned that we won’t.”

“History is replete with us forgetting we have to behave as if we know there is another pandemic coming and one after that,” Brilliant says. “And that’s not pessimistic that’s because science tells us that every year one to three novel viruses leap from animals to humans.”

Angelina Jolie speaks about the challenges facing children and refugees

Angelina Jolie tells Felsenthal that she’s worried about how vulnerable children and refugees are during the coronavirus pandemic.

Jolie, a TIME contributing editor and Special Envoy of the U.N. High Commissioner for Refugees, says “we had a crisis bigger than we could manage long before” the coronavirus emerged, noting that 258 million were already out of school and 30 million had been uprooted.

“I understand how just a little pull on that fabric—how things fall apart—it should never be that vulnerable,” Jolie says. “We should never have children around the world that vulnerable. We should not be in this state.” She is particularly concerned about children who may rely on schools for meals, as well as those living in abusive homes.

Jolie is also worried about the potential for a coronavirus outbreak in refugee camps. Acknowledging that we are not yet seeing one, she warns, “if we do it’ll spread far and fast.”

Despite the mounting challenges, Jolie says she still has hope: “I believe in humanity. I have hope and I think we really can’t afford not to have hope.”

Sen. Amy Klobuchar says she is still campaigning for presidential candidate Joe Biden during the coronavirus pandemic, but that they have not spoken about the possibility of her being on the shortlist for his Vice President. “For me, what’s important is winning this election,” Klobuchar says, adding that she is not “engaging in hypotheticals” because we have “got to deal with a pandemic.”

Klobuchar criticized the Trump Administration’s lack of preparedness in dealing with the coronavirus outbreak in the U.S., as well as his unwillingness to take responsibility. “We’re in this major crisis of unprecedented dimensions” and the president “literally says I’m in backseat (to) the governors,” Klobuchar says. “The governors should decide when their economies open but we should have a national testing strategy and a national vaccine strategy and there is no way you can replicate that one state by one state by one state.”

Klobuchar shared updates on her husband’s recovery from the coronavirus “after a scary time in the hospital.” “He’s doing well now,” she says. She also expressed her condolences for Elizabeth Warren, whose brother died from coronavirus on Tuesday.

San Francisco Mayor London Breed called for unity across the U.S. in responding to the coronavirus pandemic. “What you’re seeing is mayors and governors all over the U.S. collaborating with each other,” Breed said in an interview with Katie Couric. “It doesn’t help our country if only San Francisco is doing well. We all need to be doing well. We all need coordination and that should involve the leadership of our president.”

Breed has gained praise for her city’s swift response to the outbreak and says she was quick to take precautions and aggressive action early partially because San Francisco’s population is more than 30% Asian. “Many of our Chinese population still have ties to their family members in China and in Wuhan in particular,” Breed says. “That was enough to sound the alarm for me.”

Even if she was overly cautious, she says she would rather be criticized for overreacting when it turns out everybody’s OK. “That’s what I wanted to happen in this particular case,” she adds.Breed also highlighted how the pandemic is exacerbating disparities around health care and income, noting that San Francisco already has a complex, challenging situation with it’s large homeless community.

Artist JR discusses the story behind his latest TIME cover

The French artist and photographer JR created a 15-foot by 21-foot artwork for a recent TIME cover by pasting long strips on the pavement at 5:30 a.m. on April 11. The result: an image of a curious onlooker peering through the crosswalk almost as if it were a set of blinds.

“Of course the crosswalk is a beautiful thing that anybody worldwide can understand,” JR says in a video message filmed from his studio in Paris. “Having an anonymous person looking through it, with eyes of hope and question and wonder of what is going on out there.”

JR’s own interpretation of the art is that he’s “looking at what’s happening in the street like we’re doing every day, peeking an eye through the window of when life will come back.”

Rajiv Shah, president of the Rockefeller Foundation, believes extensive testing is the key to effectively responding to the coronavirus pandemic, while also lessening the economic fallout.

In late April, the Rockefeller Foundation, a private philanthropic organization, released a national action plan to drastically scale up testing and contact tracing in the U.S., so that the country can reopen and more effectively respond to the outbreak at the same time.

Shah says current guidelines around who can be tested are still “very restricted” and called for “broad, ubiquitous testing” for “every American.”

Currently, the country’s testing is stuck at about 1 million tests per week, Shah says. The Rockefeller plan would take that number to 3 million in the next eight weeks, partially by drawing on untapped resources, like smaller research and university labs across the country that are not currently a formal part of the U.S. Centers for Disease Control and Prevention’s diagnostic network. “That we see as a very solvable problem,” Shah says.

This article is part of #TIME100Talks: Finding Hope, a special series featuring leaders across different fields sharing their ideas for navigating the pandemic. Want more? Sign up for access to more virtual events, including live conversations with influential newsmakers. 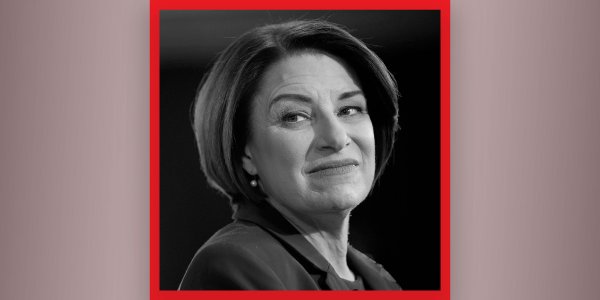 Sen. Klobuchar on Whether She's Talked to Biden About Joining His Ticket
Next Up: Editor's Pick