'It's Going to Be a Lot More Lonely.' A Dramatically Different Ramadan for U.S. Muslims Amid Coronavirus Lockdowns

Dr. Nasir Malim, a Muslim physician, has kept a beard for religious reasons for about a decade. It is a physical expression of his faith that makes him feel like he is in a state of worship at all times, he says, and it is considered virtuous in Islam. “It was always part of how I expressed myself in terms of the way I express Islam, at least outwardly,” Malim tells TIME.

But as a health care worker on the front lines of the coronavirus outbreak in New York City, Malim shaved off his facial hair last month, leaving only a slight mustache so he could properly use the personal protective equipment needed to be worn while treating COVID-19 patients in his hospital. Being without his beard wasn’t how Malim expected to start the holy month.

Ramadan, during which many Muslims refrain from food and water from dawn until sunset, starts on Thursday evening and continues through May 23. This year will be a Ramadan like no other for the 1.8 billion Muslims globally, of about which 3.45 million live in the U.S. For many, there will be no nightly prayers at the mosque, no breaking fasts in the evening at the homes of friends and family and no large congregational prayers to celebrate Eid and mark the end of the month.

Many mosques around the world around are closed, Indonesia, which has the world’s largest Muslim population, has banned an annual exodus that involves city dwellers returning home to villages across the country and Saudi Arabia has cancelled the annual haji pilgrimage, which would normally see millions gather at some of the most holy Islamic sites. Social distancing and isolation run counter to the very essence of Ramadan, which emphasizes community—a time to make new friends, as well as reconnect with loved ones.

View of the prayer area of the Islamic Cultural Center and Mosque, empty due to social distancing guidelines in Madrid, Spain, on April 23, 2020.
Bernat Armangue—AP

Rania Awaad, an associate professor of psychiatry at Stanford University and director of the Stanford Muslim Mental Health Lab, says that for many Muslims, not having the support of community this year during what is otherwise “a very community-oriented month” could cause some Muslims to doubt whether they’re doing Ramadan “right.”

“This feeling of ‘I’m going to fail at Ramadan because I’m so restless, I’m so scared, I have so many anxieties that I can’t sit on a prayer mat and surrender (to God.) Is there something wrong with me because I can’t pray and feel better?'” are the thoughts that can come up for some people, says Rabhi Fateh, an international trauma expert and therapist who works with many Muslim clients.

The month could also be particularly difficult for converts living with families who don’t approve of Islam, as well as those struggling with mental health conditions that could be aggravated by isolation, like anxiety, depression and obsessive-compulsive disorder, Fateh notes.

While health care workers’ long hours often get in the way of breaking fast and praying in the company of a community, this year will be particularly challenging for Malim given his work taking care of patients in the Bronx. “It’s going to be a lot more lonely,” he says, noting that it will just be him and his wife this Ramadan. Still, he takes comfort in knowing he is caring for people in an underserved community at this important time of year for his faith. “Though I no longer carry the beard, I do still consider the act of removing people from harm, and maintaining health and life a form of worship,” Malim says. He has taken care of dozens of critical COVID-19 patients and witnessed roughly nine deaths related to the disease in the course of his work.

Dr. Nasir Malim, a Muslim physician who works at a hospital in the Bronx in New York City, is pictured wearing personal protective equipment and before and after he shaved his beard, which he kept for religious reasons for about a decade.
Courtesy of Dr. Nasir Malim

Dr. Iman Elgammal, an emergency room doctor treating coronavirus patients in Los Angeles is unable to go back home to Detroit or gather with other relatives in the city. She lives alone and worries her Ramadan will be “really lonely.” “Honestly, I’m scared about going into Ramadan,” Elgammal says. “It’s going to be really, really hard to motivate myself—emotionally hard—knowing I have to do it alone.”

“Community is everything,” she adds, and it encourages her to pray more during the month; when she’s back home in Detroit her family leaves for the mosque every night during Ramadan around the same time, “like clockwork.”

Awaad says that many Muslim health care workers who are already dealing with anxieties about treating coronavirus patients may be worried about how they will fast as normal. “There’s a sense of how do you balance all these things together and a fear of not really being able to do a good job in all of them,” Awaad says.

Both Malim and Elgammal are planning to fast despite despite their demanding work during the pandemic. Malim is worried about feeling dehydrated while wearing a protective mask and how it could make it more difficult to continue fasting. “Everything about the situation right now will take a physical toll on my body,” Malim says. “I honestly can’t imagine doing resuscitation and doing CPR and kind of pressing down on someone’s chest to keep their heart beating while fasting” even though “it’s something that obviously I’m going to have to do.”

Khalid Latif, an imam who heads New York University’s Islamic Center, points out that while Muslims can’t pray shoulder-to-shoulder in congregations this year, there’s still a lot of ways to engage with community. “The communal aspects of Ramadan are so important. They don’t have to be lost,” Latif says, adding that it’s important to try and help underserved community members. The center has already raised more than $770,000 to help those financially impacted by the coronavirus, including those struggling to afford burial costs. Many Islamic institutes have also ramped up their online programming to make up for the lack of in-person contact.

Imams note that while Muslims will need to adapt in ways they never have before, the spiritual benefits of the month can still be attained. “Islam beautifully is trying to achieve spiritual equilibrium,” notes AbdelRahman Murphy, an imam in Texas and director of the Roots Community. Murphy says that while he is grieving the community aspect of Ramadan, during which the mosque is “buzzing with excitement and happiness,” there is an opportunity to turn inward and have an introspective Ramadan—focusing on prayers and reading the Quran, he notes.

Emily, Leena and Elaina Mejahed decorating their home in preparation for the Holy month of Ramadan, on April 22, 2020.
Courtesy of Sherihan Moustafa

Sherihan Moustafa, a mother and businesswoman, is focused on her family’s mental and spiritual health going into Ramadan, even as she may have to adapt their usual traditions. She anticipates a “technology intensive Ramadan”— breaking fasts over Zoom and watching online lectures.

The 33-year-old Egyptian-American lives in Brooklyn and is CEO of Urbanmodesty.com—a modest clothing line for Muslim women—and has six children. Ramadan is “always such a refocus and shift in mindset to what’s really important in life,” Moustafa says.

During Ramadan, Moustafa and her husband would typically go pray at a nearby mosque with their two eldest kids. “They’re disappointed. They can’t understand why” we can’t go, Moustafa says. She believes that going to the mosque as a family tells her kids that “they belong, there are others like them and it’s OK to dress like this and feel comfortable in your own skin.” But they are trying to keep the Ramadan spirit alive at home and are decorating a little indoor mosque area where they can pray, put their Qurans and have story time.

Parvez Ahmed, a 35-year-old director at a realty firm who was born and raised in New York has been fasting since he was seven or eight years old. He has never known a Ramadan without a mosque. He lives with his 4-year-old son and wife, who is expecting their second child in about a month. He recalls as a child his elder family members dragging him to the mosque. “Now, 20-something years later, here I am, trying to embed that in my son,” Ahmed says.

He now frequents a small mosque in Queens, which relies on donations to sustain its activities. “If I don’t go to pray, they don’t raise money for next month’s rent,” Ahmed says. To overcome the feeling of isolation, he has been taking his son on drives in their neighborhood, passing by familiar places like other relatives’ homes, his school and the local mosque. Sometimes they spot a worshipper or two praying outside its closed doors.

Malim sees providing care for patients as connected to his faith, particularly now as health care staff are now often the only human connection for many coronavirus patients. “That element of really providing that interaction, as well as obviously doing whatever we can to help save their lives, spiritually and religiously for me that – that is a major form of worship and in a lot of ways that helps to replace what the beard represented and what the beard meant for me,” Malim says.

He recalls being in the same room as a Muslim coronavirus patient after he declared him dead. He wasn’t sure if he was going to get a proper funeral prayer, which is especially important for Muslims. “So I quickly read kind of the funeral dua, the supplication that we say,” Malim says. “Just to—to make sure he at least has that.” 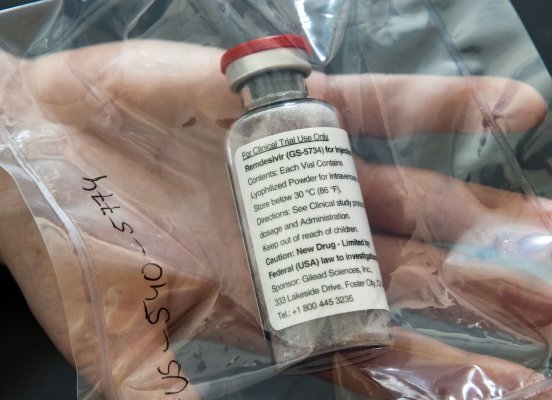 Leaked Data From a Key Remdesivir Study Suggest the Potential Coronavirus Drug Is Not Effective
Next Up: Editor's Pick