Terry Donahue and Pat Henschel came together in a different world.

The women fell in love in 1947, when norms around living openly as a gay person in the United States were far from what they are today. Though essentially inseparable from the moment they met, Donahue and Henschel kept their true relationship a secret for more than six decades. To family and coworkers, they were simply good friends and roommates; others knew them as cousins who lived together.

The couple’s remarkable journey and their eventual decision to come out late in life is movingly captured in the upcoming documentary A Secret Love, whose trailer debuts today on TIME.com. Directed by Donahue’s great-nephew, Chris Bolan, the film is set to arrive on Netflix on April 29 as part of a slate of projects coming to the streaming service from the writer and producer Ryan Murphy.

The project made its way to Blumhouse, best known for horror and social thriller films like Get Out, by way of producer Alexa Fogel’s longstanding relationship with Jeremy Gold, co-president of Blumhouse Television. “Ryan and I collaborated on The Normal Heart, and we share a passion in championing important, untold stories,” Jason Blum, who served as executive producer alongside Gold, told TIME in an email. “I knew he would be the right partner to bring on board this project. The love story between Terry and Pat is an inspiration and example to us all especially during this time where we are all looking to be uplifted.”

When the pair met, Donahue was around 22 and playing as a catcher for the All-American Girls Professional Baseball League—the women’s pro organization that inspired the 1992 Penny Marshall film A League of Their Own. The AAGPBL sent its players to charm school and required them to wear skirts to games as part of an effort to counter a perception that they were gay. But Donahue’s romantic life, hidden under those restrictive circumstances, remained that way even as her athletic accomplishments were celebrated in a popular movie nearly half a century later.

Henschel shares in A Secret Love that she had dated a few men, many of whom died under separate tragic circumstances, before she met Donahue when she was about 18. “All of these strange things are happening, and I thought, this is not what I was supposed to do,” she says in the movie. “That was before I met Terry. That changed everything.”

After they met, Henschel would travel with Donahue’s team and watch her play. When they were apart, they kept in touch. In one moment in the film, Henschel says to Donahue, “I was a long-distance operator. I could always find you.”

The two eventually moved to Chicago to live together, and remained in the area for several decades. As both women faced down growing old together, including Donahue’s diagnosis with Parkinson’s disease among the other challenges that come with aging, they ultimately decided to come out to family and friends in their eighties and live openly as the couple that they were.

Donahue, who died in 2019 at the age of 93, felt unburdened after coming out, Bolan tells TIME. “She didn’t want to go to the grave feeling like she’d lived a lie,” he says.

A Secret Love presents a rare kind of coming-out story. With the exception of a limited number of stories, like Mike Mills’ 2011 film Beginners, based on his father’s coming-out at 75, most stories about LGBTQ identity and love focus on the young. In contrast, the documentary shows the couple in recent years, after growing accustomed to keeping their relationship private, enjoying the relief of finally being open with friends and family, debating whether to get married and figuring out where they should live out the rest of their lives. Bolan says he knew he had to make a film after Donahue and Henschel came out to him in 2009. Once they realized it was possible to live openly, the women became “giddy schoolgirls” who started spilling out “seven decades’ worth of stories,” he says.

The film makes it clear that despite the ostracism they feared coming out could bring, Donahue and Henschel remained deeply in love until the end. Donahue shares that she didn’t know what to make of lesbian relationships until she met Henschel—who herself describes the moment as “one of the best days of my life.”

“I don’t know what happened, but that was it,” Donahue says in the film.

The documentary, which was filmed between 2013 and 2018 in a collaboration between Bolan and the producers Alexa Fogel and Brendan Mason, commenced just in time to capture the couple in their final years together. Fogel tells TIME that while she and Mason typically did not work on documentaries before A Secret Love, Bolan’s powerful story about the couple swayed them to make an exception. During the filming process, Fogel says, Donahue, accustomed to the spotlight from her pro-baseball years, enjoyed being in front of the camera. Mason adds that it was a powerful experience getting to observe the women navigating the growing pains of coming out in their eighties.

Henschel tells TIME that the years she spent keeping the relationship a secret was “just second nature,” but telling the world the truth allowed them both to feel like they’d opened up.

“You can become a part of what’s going on all around you,” she says. 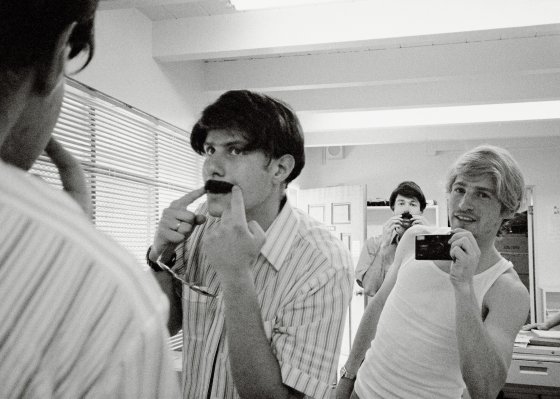 'Beastie Boys Story' Tells It Like It Was
Next Up: Editor's Pick