If you were around and into music circa 1987, your feelings about the Beastie Boys may have depended on your tolerance for obnoxious, sexist, hard-partying dude bros. That’s how they presented themselves as performers, and that’s largely the fan base they attracted. Which is not to say women didn’t sometimes love them—their pimply machismo was its own kind of rascally energy. Plus, they were just kids, being ridiculous. Sample lyric: “Girls! To do the dishes/Girls! To clean up my room/Girls! To do the laundry/Girls! And in the bathroom/Girls! That’s all I really want is girls.” Going all schoolmarm on them was a waste of energy.

Thank God, though, they didn’t go on that way forever: The follow-up to the Beasties’ 1986 hit album License to Ill was 1989 Paul’s Boutique, a much better, more adventurous work that sold many fewer copies, though it’s now considered a modern classic. In Beastie Boys Story—which airs on Apple TV+ beginning April 24—surviving members Adam Horowitz and Michael Diamond (a.k.a. Ad-Rock and Mike D) take to the stage, turning the Beasties’ story into an oral history, enhanced with sound and video clips, concert footage and general archival stuff. Adam Yauch, known as MCA, was both the founder of the group and guy whose vision helped hold it together for more than 20 years; he died in 2012, from parotid cancer, and though he’s present in spirit in Beastie Boys Story, you can’t help feeling that the whole thing would be a lot more fun, and smarter, if he were around. Horowitz and Diamond seem to feel that way too. At times their reflections have a settin’ on the front porch wistfulness, a mood that hits almost all hell-raisers at some point. There are moments when Beastie Boys Story has the aura of a heavy sigh, laden with the knowledge that the skateboard long ago skidded off the half pipe.

Still, if you’ve ever felt even a scrap of affection for the band, Beastie Boys Story has its charms. In 2018 Horowitz and Diamond released a book detailing the group’s history—it was called, with typical forthrightness, Beastie Boys Book—and devised a stage show to promote it. Beastie Boys Story, directed by longtime Beasties collaborator Spike Jonze, is a revised version of that show, filmed at the Kings Theatre in Brooklyn. Horowitz and Diamond, looking more hip dad than hip hop in their chinos and zip-up jackets, relay the story from day one, describing themselves, circa the early 1980s, as hardcore-obsessed New York City high schoolers whose lives revolved around Bad Brains, Misfits and Circle Jerks concerts. It was at one of these shows that Diamond and Horowitz met Yauch. Around this point in the film, two vintage photographs flash on the screen: One shows Yauch at 16, looking tough yet adorable in a thrift-shop raincoat, its lapels dotted with home-made badges; in the other, there’s a rat perched on his head.

Beastie Boys Story covers both the high and the many low points of the band’s career. They started out as an intensely amateur hardcore band before being transformed, by producer and Def Jam founder Russell Simmons, into a novelty: A trio of white rappers barely out of high school. Horowitz and Diamond explain that the Beasties started writing songs and raps as a goof, starting out with dumb phrases that they’d use to try to crack each other up. (The song that put them on the map with New York DJs was the kooky-raucous “Cooky Puss,” an ode to a particular style of Carvel ice-cream cake advertised on television.) They also liked to make fun of drunken white frat-boy types—until, when they were given the chance to open for Madonna on tour, they decided their strategy for getting noticed was to, as Diamond puts it, be “as rude and as awful as possible on-stage.” They went from being guys who made fun of party bros “to actually being those dudes,” he says.

After months of grueling touring—and partying—the group took a breather, eventually breaking with Simmons and regrouping in Los Angeles to try something new. From there, they continued to reinvent themselves, gradually, as they became full-fledged adults. Onstage, Diamond and Horowitz reckon with some of their brattier material. Diamond tells a story about how around the time of the band’s fifth album, Hello Nasty (1998), a journalist was grilling Horowitz about his claim that the band had grown up over the years, reminding him of how long it took for the Beasties to finally shed their sexist vibe. As Diamond recalls, Horowitz said, “I’d rather be a hypocrite than the same person forever.”

The Beasties had to change, and Beastie Boys Story charts that long, winding trek. Yauch was always the Beastie with the wildest ideas and the most effortless talent: When the trio decided they needed to become real musicians who could actually play instruments, Yauch picked up the double bass as if it were nothing. After visiting Tibet, he became involved in the Tibetan independence movement, organizing the Tibetan Freedom Concert, a series of festivals whose proceeds were used to support the cause. A clip from one of the events shows him greeting young monks in training one by one, clasping their hands in his, his face radiating pure joy. As Diamond puts it in the movie’s press notes, “Yauch made everything more interesting.”

Maybe that’s why, even though Yauch feels present in spirit, his physical absence burrows a hole in Beastie Boys Story. In 2004 I was assigned by the New York Times to review the Beasties’ video for “Ch-Check It Out.” I liked the song; I thought the video, directed by Yauch’s alter ego Nathanial Hornblower, was lame. A month after the review ran, the Times received a letter from Hornblower himself, which began like this:

The letter went on to detail the numerous ways in which Hornblower’s work would stand the test of time, despite the opinion of the “so-call New York Times smarties,” and ended thus:

Watching Beastie Boys Story reminded me of the genius of that crazy, not to mention 100 percent correct, letter. Horowitz and Diamond all but come out and say that Yauch was the best of them—the guy who first brought them together and then held them together, always coming up with new ideas they never would have dreamed of. He’s the missing ingredient from this documentary, as Horowitz and Diamond know all too well.

And I’m sorry I never got to send that goat. 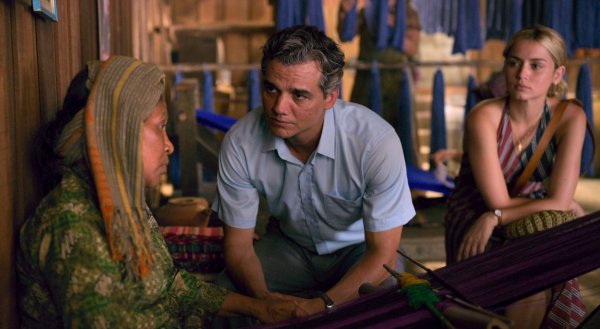 The True Story Behind Netflix's 'Sergio'
Next Up: Editor's Pick