Because of its long history, Christianity has a tendency to produce contradicting reactions to any number of situations—and the ongoing COVID-19 pandemic is no exception. On one hand, some religious leaders have shown that they believe a Christian response to the global emergency involves steps such as making allowances for their congregants to practice their faith with socially distant private worship or drive-through confession; in March, Pope Francis hailed “the creativity of priests” in responding to this crisis. Meanwhile, others have made it clear that they see their Christian faith as a reason not to follow public-health guidelines.

Lawsuits across the country filed by Christian churches seek exemptions from state-level stay-at-home orders, and some churches simply said they wouldn’t obey those orders and would hold services anyway this Easter, leading in some cases to arrests. One Virginia evangelical pastor who preached in March that he would continue to hold services in a crowded church died on April 11 due to the coronavirus. In perhaps the most notable example, Liberty University made headlines as one of the few U.S. colleges that welcomed students back to campus after their Spring Break. Though the school later reversed course and went entirely to online instruction, university president Jerry Falwell, Jr., has downplayed the threat of the virus to young people, echoing earlier statements he’d made about the virus being a conspiracy to hurt President Trump. Now, as COVID-19 deaths in the area near the school grow, the school faces a class-action lawsuit initiated by a student.

The reasons behind these acts of defiance are, of course, varied. Some said that social distancing violates the Constitution, while others claimed their religion gave them immunity from virus, while still others acknowledged the threat but said that the gatherings were essential because “true” Christians welcomed death. Some of these ideas might suggest a link between these acts of defiance and the early Church, and certainly we can see similar themes — a sense of persecution by the state, spiritual protection against the evils of the world for the select few, welcoming (what they perceive as) potential martyrdom. In fact, the perception of such a link has been demonstrated over the past decade or so by scholars such as Elizabeth Castelli and Candida Moss, among others, and the defenses mustered by churches now support that linkage; for example, one Louisiana church that defied gathering-size limits relies on a theology that specifically touts its connection to the early church.

But there seems to be something missing from how Christian groups defying public-health guidelines are thinking about the ancient past. In fact, scholars of ancient Christianity might point out that the religion’s origins offer a very different lesson—one that would be useful for the world to remember at this moment of crisis.

The growth of the earliest local cult practices among the first followers of Jesus into a pan-Mediterranean religion is a development that has interested scholars for generations. Indeed, that rise and spread was by no means linear. It moved in fits and starts, with Jesus followers (people we today think of as “Christians”) at first clustering in and around urban centers across the Roman world, remaining a very small percentage of the overall population. The real explosion only came after the Emperor Constantine’s conversion in 312 CE and his Edict of Milan the following year, allowing the formal practice of Christianity across the empire.

But though the Emperor played a large role in that story, scholars have found another consistent element that, both before and after Constantine’s conversion, made the religion grow. This element was embodied by the Latin word caritas. In English, we often translate that word as “charity” but it also, and perhaps more meaningfully, meant “love.” The term is found throughout the Christian Bible, perhaps most famously in 1 Corinthians 13, that staple of so many wedding readings today (“Love is patient, love is kind,” etc.), in which every instance we translate as “love” is actually caritas in Latin. This love, this charity, in the ancient and early medieval world, was about care for others.

This mattered because the ancient Mediterranean world was a world of disease. For example, the Antonine Plague (perhaps smallpox) ravaged populations from the Tigris to the Rhine during the late second century CE, while the Plague of Cyprian (measles?) killed thousands in those same regions towards the end of the third century CE. Generally, polytheistic philanthropy was focused on endowments and monuments, with little care for suffering bodies. Christianity offered something different with caritas. Scholars have shown that a large part of Christianity’s attraction in the Roman world was that it cared for the welfare of the people who were suffering.

Although initially a closed community, wary of contemporary social antagonism and the threat of imperial violence, these early Christians offered people a sense of equality and a social network that would “love” them with donations of food or money, that would often take them in if they were ill. It’s striking how much time in early hagiographies (lives of the saints) was spent on healing miracles. These in part are literary convention, emulations of these same miracles in the Gospels, but they also reflect the very real concerns of contemporaries. The Life of Martin of Tours, written in the fourth century CE, says at one point that “the gift of accomplishing cures was so largely possessed by Martin, that scarcely any sick person came to him for assistance without being at once restored to health.” In a world where affliction was everywhere, where the pandemic was always, a response of caritas was revolutionary.

The line between then and now is never direct. There is no “rainbow connection” that we can use to move between epochs, skipping over the historical change that’s occurred across the last 1,700 years. But history echoes. In the later Middle Ages, in stone on cathedrals across Europe, virtues and vices were paired. Charity was depicted as the antidote to avarice. Caritas was portrayed as a woman giving what she had to help someone in need. Avarice was shown as hoarding, being concerned only for yourself and not for the public good.

The early hagiographies, the images etched into those cathedrals, still hold lessons for us today. The Christian groups in 2020 that are resisting stay-at-home orders are actually far divorced from the historical models they might seek to emulate. Actions that put others at risk are actions that create rather than ameliorate future suffering. They’re far removed from the early Christian ideal of caritas—an ideal that should hold just as much power today as it did all those centuries ago. 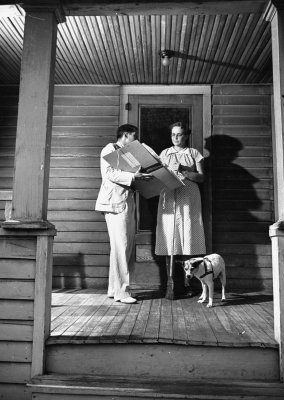 Filling Out the Census as a Political Act
Next Up: Editor's Pick