What Happens Next with Syrian Refugees, Europe and Coronavirus

Syrian refugees sit around a campfire in an empty market hall in the Turkish border town of Edirne near the Pazarkule-Kastanies border crossing on March, 5 2020.
Mohssen Assanimoghaddam—DPA/Getty Images
Ideas
By Ian Bremmer
Bremmer is a foreign affairs columnist and editor-at-large at TIME. He is the president of Eurasia Group, a political-risk consultancy, and GZERO Media, a company dedicated to providing intelligent and engaging coverage of international affairs. He teaches applied geopolitics at Columbia University’s School of International and Public Affairs and his most recent book is The Power of Crisis

It feels like a lifetime ago that Turkish President Recep Tayyip Erdogan was shoving Syrian refugees toward Greece in a desperate attempt to involve the Europeans more directly in Syria. Erdogan had learned the hard way that he wasn’t a match for Syria’s Bashar Assad so long as Russia’s Vladimir Putin was backing him.

That was barely a month ago.

Erdogan gambled that avoiding another migration crisis was Europe’s top priority, which would give him leverage over Brussels. Needless to say, Europe now has other priorities. But just because coronavirus is front of mind these days doesn’t mean the potential for another European refugee crisis has gone away. Here’s what you need to know.

Start with the current situation in Syria. After a near-decade of civil war, there’s not much health care infrastructure left to deal with the coronavirus outbreak—just 64 percent of public hospitals in the country are deemed to be “fully functioning.” Coronavirus was first officially announced on March 22, and the virus prompted Assad to pause mandatory military conscription and all non-essential business, halt public transport, impose curfews and limit travel between the regions under his control. But instituting lockdowns are a last-ditch effort undertaken by governments to buy themselves time to shore up medical supplies and ensure their health care system isn’t overwhelmed; as France, the U.S., and countless other developed markets are currently proving, that’s difficult under the best of circumstances, and comes with tremendous economic costs. With its economy and healthcare system already in tatters, Syria isn’t in a position to deal with either the medical or financial fallout from the coronavirus.

And that’s the uncontested part of Syria. The situation in Idlib, the last remaining holdout of anti-Assad forces in the country and the focus of the Turkish offensive, is another matter entirely. One million people have been displaced in Idlib, and social distancing isn’t a viable option in overcrowded refugee camps. If violence wasn’t enough to get Syrians to flee, the prospect of contracting coronavirus in a country with such few medical resources left may well do the trick. Hence why Ankara is eyeing the Syria situation so warily, worried that individuals with coronavirus may still try to sneak through the shuttered Syria-Turkey border.

With transmissibility of the coronavirus as high as it is, that would be a major problem for Turkish authorities already very much struggling with their coronavirus response domestically. Erdogan will try to reinforce the Turkish-Syria border with more Turkish troops; the 3.6 million Syrian refugees already being housed in Turkey are far from popular among the Turkish populace, which makes diverting resources to assist them that much harder. So long as there is not a massive exodus of Syrian refugees towards Turkey, Erdogan is content to ignore them for the sake of his own political fortunes and Turkey’s financial position.

But avoiding that exodus depends on Russia not prodding Assad to launch an offensive to capture Idlib and secure total victory. Russia is also struggling to contain the coronavirus outbreak at home, but if the opportunity presents itself, it might well push Assad to assert more control over the city, bringing more refugees to Turkey and piling the domestic pressure on Erdogan.

That’s the nightmare situation for Erdogan, as Erdogan can’t try the same move of pushing refugees into Europe like he did last month. Certain European countries—Greece chief among them—treated Erdogan’s decision to send refugees to European borders as a hostile act, though some countries (like Germany) tried to remain level-headed about it, hoping that sending more money to Ankara would kick the can down the road further. If Erdogan were to try to do the same with refugees carrying coronavirus (or even just suspected of doing so), it would be treated as an openly hostile act.

And the Europeans are also braced for such a move following the events of last month. Greece suspended asylum applications in violation of international law, but with the backing of Brussels, which placed the continent’s territorial sovereignty above international law. A refugee crisis interwoven with a coronavirus crisis is a crisis for the entire E.U. And unlike financial matters that typically lay bare the schisms in the union (the latest is the flare-up between north and south over coronabonds), an assault on the territorial integrity and health of the European public would bind the E.U. together in the face of this common, immediate threat.

Two things in particular are worrying European lawmakers these days on the migration front; first, the warming weather might compel some refugees to undertake the journey regardless of whether or not they have Turkish support. Second, Erdogan is notoriously erratic when he feels political pressure, and if he gets to that point of desperation, he might try to foist Syrian refugees on Europe in an attempt to relieve pressure on himself back home. But Europe will hold the line in protecting its borders from the outside… even if it requires violence. That’s bad news for a Europe that wanted to project itself as a beacon of Western and humanitarian values to the world, that’s bad news for Erdogan who will struggle to offload a refugee population that Turks are growing increasingly hostile against, and it’s even worse news for the refugees stuck in the middle between the two.

This wouldn’t be a 21st century crisis if refugees didn’t manage to get the most screwed at the end. This might be the one thing that coronavirus hasn’t upended.

“The epidemic has bolstered the cause of those who have long opposed refugees — most of them the same parties and politicians who advocate for strict border controls. But if the public debate plays up the perceived link between the virus, borders, and migrants, this will come dangerously close to arguments about national purity and racial superiority.” Pawel Zerka of the European Council on Foreign Relations. 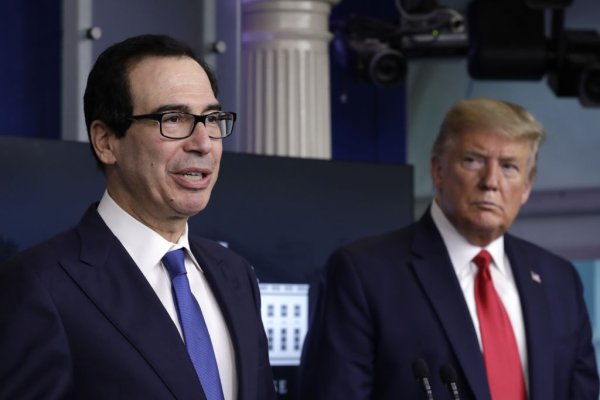 Mnuchin: Trump's Signature Was Not President's Idea
Next Up: Editor's Pick