No one likes getting older, least of all actors. But there are reasons actors often do their best work in their 40s, 50s and beyond: if they can free themselves from the desire to play likable characters, they can move into the far richer territory of playing polychrome ones. In Cory Finley’s white-collar-crime dark comedy Bad Education, on HBO beginning April 25, Hugh Jackman and Allison Janney use their chief currency—their inherent likability—to lead us down a thorny, jagged path. As modern humans, we take so much pride in knowing everything that we forget how pleasurable it is to be duped. It’s fun to put ourselves in the hands of expert bamboozlers, and in Bad Education, Janney and Jackman are exactly that.

Jackman stars as Frank Tassone, the much loved and highly efficient superintendent of an affluent Long Island school district, Roslyn, in the early aughts. Under Frank’s guidance, the district’s academic record has soared, raising property values and thrilling parents, who are overjoyed to see their little Justins and Jessicas being funneled into Ivy League schools. Frank is the sort of guy who remembers kids’ names and what they’re interested in—his people skills are half slick, half genuine. His second-in-command, Janney’s Pam Gluckin, is more hard-nosed—her deadpan glare is practically a death ray. Together, these two are a great success story, and their community adores them for its own selfish reasons.

Then a bright student journalist, Rachel (Geraldine Viswanathan, in a sly, quietly vital performance), pops into Frank’s office for a story she’s working on, about a skywalk the school is planning to build. She seems happy with the quick quote she gets from him, and when he presses her—Doesn’t she want to ask any follow-up questions?—she assures him it’s just a puff piece. “It’s only a puff piece if you let it be a puff piece,” he tells her, thus handing her the keys to a cabinet full of not-so-carefully hidden secrets.

Bad Education, based on real-life events, is a story about old-fashioned shoe-leather—or, in this case, sneaker-sole—journalism. There’s something heartening about the way Rachel is driven to pursue what starts out as a nonstory, even as plenty of those around her (including the paper’s editor, played by Alex Wolff) claim she’s wasting her time. This is how journalism, a notoriously low-paying profession that’s increasingly endangered, will survive.

But Bad Education is also a story about hubris, vanity and the way regular people just can’t help desiring status and fancy things—and about the reality that people are often more complicated than we want to believe. These are roles that Jackman and Janney can dig into, and they turn up all sorts of dark, glittering surprises. Janney has the face of the best friend you’d trust with your life, and she uses that to wily effect here: Pam gets stuff done by barking commands even as she maintains a sense of humor—but you also see ripples of repressed anger shimmering beneath her gal-Friday surface. And Jackman is terrific here, a preening peacock in an array of meticulously pressed suits. Frank is the kind of guy who’s spent so long polishing his public mask that he’s lost sight of the man inside—yet he still betrays the occasional glimmer of tenderness or generosity. Bad Education is a story of small-town villains who just can’t help themselves, and it’s fun to see how their own carelessness trips them up. These are people we can’t trust, played by actors we trust implicitly. Why not be flimflammed by the best? 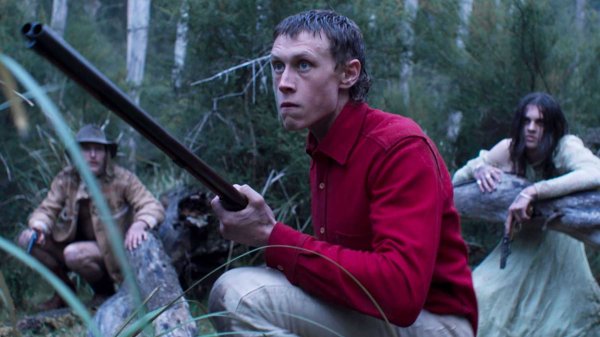 True History of the Kelly Gang Paints Australian Outlaw Ned Kelly as a Punk Rebel
Next Up: Editor's Pick