Two men talk in front of a home destroyed by a tornado on April 13, 2020 near Nixville, South Carolina.
Sean Rayford — Getty Images
By Tara Law

Anna Jones, a 25-year-old in Chattanooga, Tennessee, was trying to be as safe as possible during the COVID-19 outbreak. She was staying at home, taking her nursing classes online, and she even quit her job to avoid spreading the virus to her family. Then, on April 12, the tornado came. The EF-3 twister ripped Jones’ house from its foundation, destroying the upstairs in the process. Jones and her father emerged unharmed, but in the aftermath, both put caution aside. Jones’ father teamed up with neighbors to help rescue people trapped in another damaged house, and then went door-to-door to check on others. All the while, Jones couldn’t help herself from hugging people, especially a neighbor who gave her water and fresh clothes, and two teens who found her missing dog, Chloe.

“We walked outside, and even in the midst of everything, we took a moment to say, ‘so much for social distancing, give me a hug,'” says Jones. “I know that it’s bad, and I know that we need to be doing it. It was just in that moment, I thought we were going to die, and my neighbors thought they were going to die.”

The tornado that nearly killed Jones was part of an unusually violent tornado outbreak that ravaged communities across the American South this week, killing dozens, destroying or damaging hundreds of homes, and sending families scrambling to find shelter. In the aftermath, officials from Texas to South Carolina were left to grapple with an urgent question: How do we respond to natural disasters during a pandemic without exposing even more people to a deadly virus? “The fact that the coronavirus exists is complicating the recovery from the tornado, while the tornadoes are complicating our efforts to make sure that we do everything in our power to stop the spread of the virus,” Mississippi Governor Tate Reeves said after the storms.

Indeed, emergency management agencies across the country, many of which were strapped for resources even before the outbreak, are already working in overdrive to deal with COVID-19, says Samantha Montano, an assistant professor of emergency management and disaster science at University of Nebraska, Omaha. Natural disasters will just make their jobs that much harder, she says. “When you pair [the coronavirus] with another disaster on top of it, it really just threatens to completely overwhelm that formal emergency management system that we have in the U.S.” says Montano. That disaster response efforts often require people to get close to one another further complicates matters — moments of heroism like Jones’ father’s efforts to help her neighbors can put people at “particularly high risk” of contracting COVID-19, Montano adds.

Officials in many of the states hit by this week’s tornadoes are finding ways to help those in need while trying to reduce the risk of spreading COVID-19. In Tennessee, where the storms killed at least 24 people and where nearly 6,000 people have contracted the disease, the state’s emergency management agency gave personal protective equipment to first responders and search and rescue workers. Officials in Mississippi, where 12 people were killed in the tornado outbreak, urged people in shelters to wear face coverings and practice social distancing. Arkansas “greatly reduced” shelter capacity to enable better social distancing, and the state is working with the Civil Air Patrol, the civilian auxiliary of the Air Force, to do damage assessments with minimal human contact.

Some disaster response groups are also rethinking how they shelter families whose homes were damaged or destroyed in the storms. Instead of tightly-packed shelters, the American Red Cross has placed more than 550 people affected by the tornadoes in hotels and dorms, where social distancing is at least a little easier. While the ARC is using shelters as well, it has implemented several new safety precautions, including health screenings, mask handouts, adding space between cots, and more frequent cleanings. It’s also providing some services virtually, like mental health and financial assistance.

People who need to stay at a disaster shelter should follow health experts’ guidance as much as possible to avoid contracting or spreading COVID-19, says Gary Cecchine, a senior policy researcher at the RAND Corporation. “Wear your mask, wash your hands a lot, wear gloves if you have them, and stay away from people,” he says. “And hopefully you’re not in a shelter for a long time.” He also recommends that, when possible, disaster victims should stay with friends or family rather than shelters to limit community spread.

Despite officials’ best efforts, experts say it will be hard to contain a virus as contagious as COVID-19 in the wake of natural disasters. One big problem, says James Hodge, the Director of the Center for Public Health Law and Policy at Arizona State University, is that disaster survivors can inadvertently spread the disease if they travel to stay in another community. Ideally, Hodge says, disaster-stricken regions would conduct mass testing for the virus, but testing shortages and backlogs will make that difficult, at least for now. Ryan Malosh, an infectious disease epidemiologist at the University of Michigan School of Public Health, adds that people whose homes have been destroyed and lives upended are particularly vulnerable to COVID-19. “Where people aren’t able to get care as quickly as they might need, they’re not getting good sleep, they’re not getting good nutrition, and so they’re more susceptible to severe outcomes,” he says.

The added wrinkle of a global pandemic on the top of this week’s tornado outbreak offers just a preview of what’s to come for dealing with other natural disasters in the coming months. This year’s hurricane season, for instance, is forecast to be “above normal.” A Hurricane Katrina- or Sandy-level storm, experts say, could result in significantly more viral spread than a handful of tornadoes, however violent they may be. “It would be, from a COVID perspective, quite disastrous,” says Hodge. “It would be an unmitigated, untracked spread.” Malosh says that, in order to get ahead of the problem, officials should clearly communicate what residents need to know before a disaster strikes. “The public will need to know both where to go to be safe from the natural disaster and how to protect themselves, and others, from the virus once they get there,” he says.

As for Jones, she’s just grateful that she and her father are now safe with her brother and his wife. They plan to move into a condo soon, but the virus will make it that much harder for them to rebuild their lives. They lost almost everything in the storm, and Jones is worried the virus will make it harder to buy necessities like mattresses. She was taken aback when she went to a store to get supplies and was told to wait on line outside — the tornado had pushed the virus entirely out of her mind. “We lost everything, so the immediate thing was, ‘O.K., we need to go to Walmart and just get toothbrushes,'” she says. 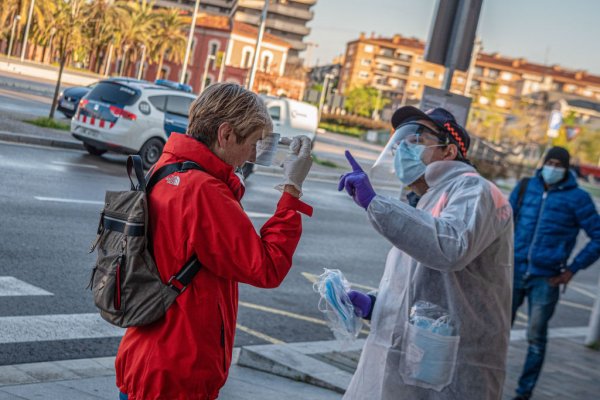 Some European Countries Are Slowly Lifting Lockdowns
Next Up: Editor's Pick