South Korea Is Voting in the Middle of Coronavirus. Here's What U.S. Could Learn About Its Efforts to Protect Voters

South Korea heads to the polls on Wednesday to vote in parliamentary elections, making it the first country with a major coronavirus outbreak to hold nationwide elections since the pandemic began.

The nation was a focal-point of the outbreak when a cluster exploded at the end of February in Daegu, South Korea’s third-largest city. More than 10,500 people have now tested positive for the virus that causes COVID-19.

Officials have since flattened the curve through aggressive contact tracing, prolific testing and travel restrictions. New infections have also slowed to a few dozen a day. Now almost 44 million eligible voters are heading to the polls—with strict new procedures enacted to protect them on election day.

If the vote is conducted without causing a spike of coronavirus infections, it may provide a roadmap for upcoming elections in other countries, including the Nov. 3 election in the United States.

“The Korean election process has been well-thought through from the perspective of minimizing COVID-19 infection risk,” Scott Snyder, senior fellow for Korea studies and director of the program on U.S.-Korea policy at the Council on Foreign Relations, tells TIME. “It would be a model for how to effectively and safely process voters in the United States.”

The spread of COVID-19 has forced the delay of polls around the world. More than fifteen U.S. states have pushed back primaries and the U.K. postponed local elections by a year. Ethiopia has announced that parliamentary elections set for August will be rescheduled.

The U.S. presidential election is more than six months away, but debate is already raging about how to conduct it in the likely event that COVID-19 is still a threat. (A vaccine won’t be ready for widespread use for more than a year, according to experts.)

One option, extending mail-in voting, is already facing opposition from President Donald Trump and other conservatives. But if the outbreak persists until November, voting in person could also present problems—at least if Wisconsin’s experience is anything to go by. An effort to delay the Apr. 7 primary was blocked by state Republicans. Many polling stations closed anyway after poll workers dropped out citing health fears. (Just five of 180 polling stations opened in Milwaukee, the state’s largest city.) Voters had to weigh exercising their democratic duty with protecting their health as they waited in hours-long lines to cast their votes.

Residents wait in line to vote in a presidential primary election outside the Riverside High School in Milwaukee, Wisconsin on April 7, 2020.
Kamil Krzaczynski—AFP/Getty Images

There was some debate over delaying elections in South Korea, but President Moon Jae-in would have faced serious opposition to any changes in the election schedule, says Won-ho Park, who teaches voting behavior and research methods at Seoul National University. South Korea spent decades under military rule and the first free and fair parliamentary election only took place in 1988. “The president postponing the election of the legislators would look like something taken out of the playbook of the dictators we had in the past,” he says.

Polling stations across the country will be disinfected regularly while voting is open. Officials will be checking temperatures, and anyone with a fever will be directed to a special voting booth. Voters will be provided with hand sanitizer and plastic gloves before entering the polling station, and wearing a mask will be mandatory.

More than 14,000 polling stations have been set up for voters, and the election commission is asking people who have to wait in line to stand one meter, or a little over three feet, apart.

Special accommodations have already been made for those who have COVID-19; they could either mail in their vote, if they registered between Mar. 24 and 28, or were allowed to vote early on Apr. 10 and 11, at one of eight polling stations that the election commission set up for coronavirus patients and healthcare workers in hard-hit areas.

Individuals in self-isolation after recent travel or possible coronavirus exposure are able to vote at a designated time to prevent them from mingling with people who aren’t infected. However, they are banned from taking public transport to reach polling places, according to local media.

The U.S. can take similar precautions for November elections

The geographic and population differences between South Korea and the United States are obvious—South Korea’s landmass is about the size of Kentucky. While it has about one-sixth as many people, it’s more than 15 times more densely populated than the U.S.

However, some of South Korea’s precautions could be applied in the U.S., experts say. Timothy S. Rich, who studies elections in East Asia at Western Kentucky University, says that many of the measures put in place could be adopted at polling sites across the U.S.—including allowing early voting, extending absentee voting, mandating the use of hand sanitizer and ensuring polling places are disinfected and that voters stand at least three feet apart in lines.

Youngmi Kim, a senior lecturer in the department of Asian studies at the University of Edinburgh says that Americans may hesitate to adopt some of the same measures, for example mask wearing, which is more culturally accepted in South Korea.

Rich says the most important measures the U.S. can imitate from the South Korean election are those which reduce long lines on election day.

“Voters shouldn’t have to risk their health to vote,” he says.

The risks of elections during COVID-19

South Korea’s decision to move ahead with the election will not come without cost—even if officials are able to stave off a spike in infections.

Rich says that most legislative elections have a turnout rate of 50% to 60%, but he expects fewer people to vote this year. “I suspect higher-risk groups may try to vote early or not at all,” he says.

Park, of Seoul National University, agrees that despite precautions, some voters may decide to stay home over fears of the virus. He says that may further polarize the political landscape, as less partisan voters may opt out of voting—which casts doubt on the future of some small third parties that had gained momentum in recent elections.

“This election will pretty much wipe them out, and coronavirus will be one of the main factors,” Park says.

The election has already faced challenges. The National Election Commission said it had to shut down voting for overseas citizens, which took place from Apr. 1 to 6, at 91 missions due to the spread of COVID-19, impacting more than 87,000 voters, or about half of those eligible.

Despite the problems, experts say that forging ahead with elections is likely the right move for the country.

“It’s not surprising that Koreans would seek to continue with the elections if possible, and it helps that the pandemic is starting to get under control in South Korea,” says Mintaro Oba, a former U.S. State Department official who specialized in the Koreas. “The right to participate in democracy is one Koreans take seriously—and they know how easily it can be rolled back or lost.” 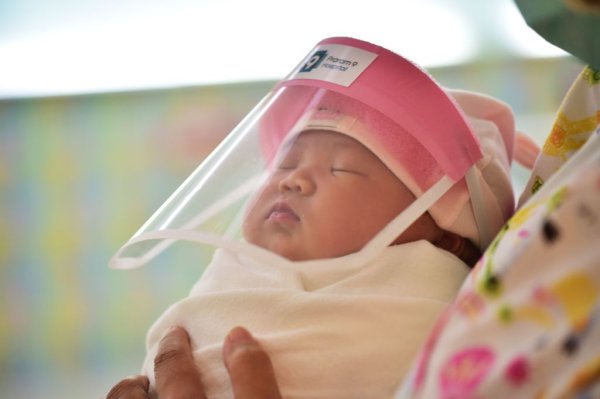