A person sits amongst empty tables and chairs at Domino Park in Williamsburg, Brooklyn on April 7
Stephanie Keith—Bloomberg/Getty Images
Ideas
By Eugene Linden
Linden explored scenarios for instability in his book, The Future in Plain Sight. His most recent book is Deep Past, a novel.

How might a post-pandemic world look and feel? Let’s imagine a creative team at a New York City advertising agency pitching a campaign in 2050 for a new perfume (more than most products, perfumes are sold by attaching to the dreams and aspirations of their times). The Big Apple, thirty years hence, remains a vital hub, but the city is greener and quieter than it is today. The few pedestrians on the streets give each other a wide berth.

Cities such as New York persist because people need to meet face to face. Chance encounters, however, are not as welcomed as they were in more free-wheeling times. Waves and air kisses have replaced handshakes (and even Japanese-style bowing has made a comeback). There are far fewer bars and many more private clubs (with their vetting procedures, clubs offer better protection against encounters with carriers of infectious disease). Most office buildings maintain positive air pressure and have air locks to prevent contagion from entering, and during periods of outbreaks, those entering or leaving are subject to containment protocols that require the sterilization of clothes and exposure to a brief microbe-killing dose of ultraviolet light.

The protocols are so cumbersome that they’ve had an impact on how people dress. Many people wear robes, not to signal religious affiliation, but because they are easy-on, easy-off when disinfectant procedures are activated. The long, flowing garments also level rank and affluence in a society that has become intolerant of greed and privilege. Those with money take pains to be inconspicuous.

The biggest changes, however, have to do with values. And in world traumatized by past pandemics, the clues to the future lies in the past. The rhythm of history has been periods of stability and prosperity followed by a descent into instability. As we try to understand how the COVID-19 pandemic may transform our lives, the present may be one of those times when we need to look to the past to get a glimpse of what lies ahead for society.

Stability is fundamental. It provides a lens through which to view the contours of the future. If we could make an informed guess as to whether the future will be more or less stable than the present, we would know a lot about what’s to come. That’s because we know how peoples and societies have reacted during past periods of instability.

What is stability? For ecologists, stable systems are characterized by attributes such as persistence and resilience. Resilience, for instance, enables a system to recover from shocks. These attributes aptly describe the post-World War II period, which saw the global economic order power through the collapse of the Communist empire, multiple financial crises (including 2008), religious fanaticism, and other shocks. Whether the present stability, with its reliance on globalization, will survive the shock of the coronavirus pandemic remains an open question.

Stability has obvious benefits. A sense of security nurtures innovation, investment, and technological experimentation and advance. There is also more social experimentation and blurring of cultural identity, which is a mixed blessing because couples no longer need to stay together out of financial necessity and families can come apart.

In both ecology and human society, however, stable systems contain the seeds of their own undoing. During stable times food supplies increase, threats recede, and populations explode. In a world of finite arable land and fresh water, however, the margins of error diminish with change to any of the conditions that fostered the population explosion — e.g. a good climate. At that point, second order effects such as xenophobia and nationalism come into play as, for instance, people forced off their lands by drought or political upheaval seek refuge only to find that such sought after safe havens are already fully occupied.

Pandemics, though massively disruptive, are but one of the factors that might tip a stable system into a tailspin. Others include climate change, the rise of religious extremism, a widening gap between the rich and poor, destabilizing tides of migrants, ever more volatile markets, and hard limits imposed by demands on fresh water. All of these factors have proven themselves to be destabilizing to one degree or another around the world in the new millennium, and the interaction of these factors can accelerate a decline.

“Dark Age” is one phrase used to describe past periods of instability. The forbidding words remind us that the march of civilization is not a straight-line progression towards enlightenment. While not all is dark in such unstable periods, life and values are very different.

In stable times, people look outward; in unstable times societies turn inward. When instability rules, people take out “insurance” of various sorts. They turn to families, tighten ties to community, and accept the trade-off that these deeper entanglements limit opportunities for exceptional wealth for any one individual. Expertise becomes more important. Amid renewed xenophobia, people tend to cluster with their own. In the New York of 2050, Chinatown, for instance, has re-established itself as an enclave for Chinese.

With a less exuberant economy there is less innovation and experimentation. Religion becomes more important as people search for answers, though amid instability, traditional religions compete with emergent messianic sects and new faiths. Given the right mix of circumstances, strongmen and gangs can also gain influence. Witness the decades-long chaos afflicting Somalia, or the growth of MS-13, a gang which has flourished in the instability of Central America.

As for the perfume campaign, in this particular pitch, the creative group shows the client a tableau featuring a woman and her children in a sylvan setting raptly listening of an elderly man in a flowing white robe – an image more akin to something out of the Jehovah’s Witnesses magazine, The Watchtower, than something one might see in Vogue today. Celebration of youth culture is dead, replaced by a yearning for order and stability. The man pitching the campaign says, “We are talking to a woman who sees herself comfortably ensconced in the values of the day, a woman who dreams of a refuge and the comforting presence of elders – in short a woman of the fifties.” He’s referring, of course, to the 2050s.

Could this happen? Such dark ages have happened many times in the past. And with coronavirus, some of these changes are already underway. Exhibit A: there’s a grass roots movement to nominate Dr. Anthony Fauci, the 79 year-old face of efforts to combat COVID-19, as People magazine’s sexiest man alive. The coming changes won’t be all bad; indeed, cooperation for the greater good is what will get us through this pandemic. 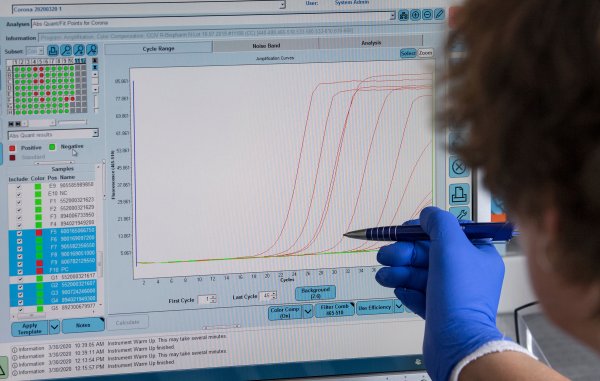 What Numbers Mean in the Coronavirus Crisis
Next Up: Editor's Pick