'It Tortures Me That I'm Not There Helping.' Former FDA Commissioner Scott Gottlieb on the Fight Against COVID-19

"It tortures me that I’m not there helping the agency through this." —Dr. Scott Gottlieb, former FDA commissioner
Stephen Voss—Redux
By Jamie Ducharme

In certain circles, Dr. Scott Gottlieb is famous for keeping a flock of seven chickens in his backyard–and for once retweeting a (fake) cover of the (real) magazine Backyard Poultry bearing his likeness. Under nearly any other circumstances, I would have begged to see said chickens the moment I started talking to the former U.S. Food and Drug Administration (FDA) commissioner.

But in these coronavirus-dictated circumstances, I settled for talking with Gottlieb, 47, from Brooklyn, a socially distant 55 miles from his home in Connecticut–where, save occasional trips to Washington, D.C., he’s hunkered down with his family and his flock.

Despite the fact that Gottlieb is working from home, he arguably has been in the public eye more now than at any time since he resigned from the FDA last spring. A prolific tweeter and constant cable-news presence, he has emerged as one of the leading U.S. voices on COVID-19 mitigation and a key player in crafting the country’s path forward.

Long before most U.S. government officials were talking publicly about the novel coronavirus, Gottlieb was sounding alarms. Concerned by its contagiousness, he began tweeting warnings days after the World Health Organization first acknowledged the new illness on Dec. 31. He started making calls to government officials on Jan. 18. By the end of the month, he had written multiple op-eds about the need to scale up U.S. testing capacity–fast. “I got some snickers from associates about why I was tweeting so much about it,” he admits.

No one is laughing now. Gottlieb’s COVID-19 proposals are cutting through a crushing news cycle to reach key members of the Trump Administration, including President Trump himself. For example: after Gottlieb co-wrote a March 29 report for the conservative American Enterprise Institute (AEI) that included the controversial suggestion that everyone wear fabric masks to reduce viral spread, Trump said it was “certainly something we could discuss.” On April 3, Trump and the Centers for Disease Control and Prevention made the recommendation official, reversing months of dissuading the public from wearing masks.

Gottlieb is well-positioned to catch the Trump Administration’s ear: he ran its FDA from May 2017 until his abrupt departure in April 2019 and remains a White House insider. (He is also advising Massachusetts Governor Charlie Baker and Maryland Governor Larry Hogan on COVID-19.) Under Gottlieb, the FDA pushed through record numbers of generic-drug and device approvals and was friendly toward experimental treatments–a blueprint for the agency’s current focus on greenlighting COVID-19 therapies.

Despite having previously held two senior FDA roles, Gottlieb was a contentious pick for the top job. Both an internal-medicine physician and a venture capitalist with a libertarian streak, he’d made a fortune investing in pharma, and many thought he had an uncomfortably cozy relationship with the industry he would be tasked with regulating. He was confirmed by a narrow 57-42 margin in the Senate, and Washington Senator Patty Murray blasted his “unprecedented financial entanglements.”

But he seemed to pull off the balancing act while in office, somehow managing to keep the pharma industry, the public-health world and his famously volatile boss mostly happy, most of the time. His highest-profile enemies became the e-cigarette industry and its supporters, as he blamed Juul Labs for sparking a youth vaping epidemic and tightened regulation on the entire industry.

“I’ve tried to be conscious of speaking my mind, giving people my blunt opinion, giving objective feedback without doing it in an objectionable and political way,” he says of his leadership. “I’ve always been very steadfast about assuming people have good intentions and good motives. They might just arrive at a certain policy question with different ideas than I do.”

He was an uncommonly accessible government official, tweeting regularly and with candor, and occasionally going viral for his sartorial choices. Gottlieb is a fast talker who speaks in sound bites, and is drawn to the immediacy and directness of Twitter–another asset during a fast-evolving pandemic. Gottlieb kept up a grueling travel schedule while at the FDA, spending weekdays in D.C. and weekends in Connecticut. He’d wake at 3 a.m. every Monday to be on a flight by 6 a.m., and those commutes led to some of his more offbeat posts.

Last April, he stepped down from what he called “the best job I’ll ever have” to spend more time with his wife and three young children. It was a blow for many who viewed him as among the most competent members of the Trump Administration. “What I said was the truth,” Gottlieb emphasizes now. “It was getting lonely being in Washington all week.”

But if anything has made Gottlieb second-guess that decision, it’s COVID-19. “I certainly regret leaving now,” he admits. “It tortures me that I’m not there helping the agency through this.”

Still, he has plenty of rooftops from which to shout. He has a Twitter handle with an audience 281,000 strong and an in-house studio for broadcast-news hits. In addition to board appointments at pharma giant Pfizer, genetics company Illumina and health-tech firm Tempus, Gottlieb has gone back to his pre-FDA roles at AEI and venture-capital firm New Enterprise Associates.

In Gottlieb’s AEI report, he and his co-authors explore how the U.S. can emerge from COVID-19’s shadow. The first phase–the one we’re in now–requires extreme social distancing, while experts fine-tune COVID-19 testing, treatment and surveillance. Once those tools are in place, life can edge closer to normal while researchers get a vaccine ready for distribution, a process Gottlieb says could take up to two years. Until then, the goal is to minimize the effects of COVID-19, preventing it from overwhelming the entire U.S. health care system, he says. The long-term goal is to prevent anything like this from happening again, by improving disease-monitoring capabilities, building up a national supply stockpile and boosting domestic manufacturing output.

Gottlieb praises the government for quickly implementing travel restrictions and airport screenings, but says it should have been faster to bring on outside labs for testing and should more aggressively pursue industry partners for therapeutic development. Still, “Things were harder than it looks like from the outside,” he says. “Having been on the inside, [I know] that’s always the case.”

And though Gottlieb maintains more could have been done in January and February to slow coronavirus’s spread, he’s confident America can recover. It will be slow, and it will require concessions that extend well into the future–restaurants may seat fewer tables, elevators may post capacity limits, travel may become less discretionary–but the country will move forward. “This can become a livable pathogen where it’s there, it circulates, you’re going to hear on the evening news about outbreaks in a dorm or a movie theater, but people go about their normal lives,” Gottlieb says. “Things change, but the changes are livable.” 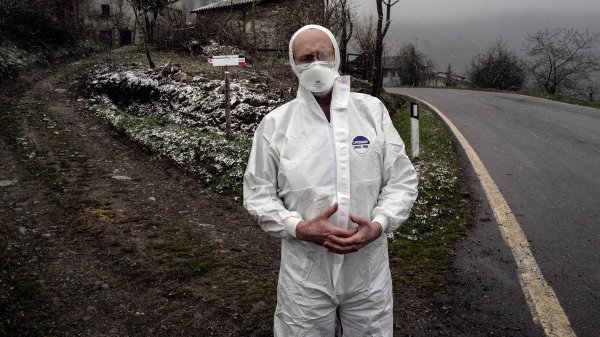 The Italian Doctor Flattening the Curve by Treating COVID-19 Patients in Their Homes
Next Up: Editor's Pick