While much of the homebound world waits out coronavirus in momentary dormancy, the daily grind has never been so busy, or so hazardous, for T, a public sanitation worker in Hong Kong who uses an initial as she lacks permission to talk to the press.

Families complying with the government’s work-at-home, stay-at-home appeal are generating great mountains of household garbage. Take away containers, surgical masks, disinfectant wipes and all the other single-use disposables proliferating amid the health crisis are piling up, potentially exposing trash haulers like T to infectious waste.

“There’s so much of it, it’s maddening,” the 60-year-old industry veteran tells TIME.

T, who has collected trash from the same towering, yellow housing estate for decades, estimates her workload has more than doubled since the outbreak began. Despite the added volume and possible exposure to a deadly pathogen, she says her pay remains the same at about 9,000 Hong Kong dollars ($1,154) per month, or slightly above local minimum wage.

T works two physically demanding shifts a day, six days per week. As many in Hong Kong tackle their third month of working from home, she says she cannot imagine such a luxury.

In Hong Kong, a semiautonomous Chinese enclave, residents have hunkered down since the end of January, practicing an early wariness that helped the city skirt the virus’ worst—at least so far. After infections started to surge again mid-March, the government shuttered bars and karaoke parlors and closed the borders indefinitely, hoping to curb imported cases and those connected to entertainment venues. With schoolkids and professionals cooped up for the foreseeable future, residential waste collectors like T are bracing for a prolonged inundation.

Yet T, who cannot read, says she has received no guidance about the new coronavirus or whether she needs to be handling trash—including items potentially carrying coronavirus—any differently during the pandemic. A study in the New England Journal of Medicine published last month found that the coronavirus can survive on plastic and stainless steel for up to 72 hours, and on cardboard for up to 24 hours. Other studies have found it lingering for even longer.

Hong Kong’s Centre for Health Protection has published pamphlets advising health professionals, public transportation drivers, cabin crew and beauty salon staff how to avoid getting sick at work. Its general “workplace” advice urges employees to “properly clean up rubbish and waste,” but does not elaborate on what that might entail.

At least two people in the building where T works underwent mandatory home quarantine last month, according to government data. T had no idea and says she has no way of knowing if residents there are falling sick.

“There’s nothing really I can do,” she says.

She adds that she doesn’t dare ask her company, Easy Living, for a training. “They’ll threaten me, say if you don’t do the job, there’s plenty of people that will.” Amid the current economic crunch, T says she’s already clinging to her job since people facing layoffs in the restaurant industry are lining up for cleaning work.

In a phone call to TIME, an Easy Living representative defended the company’s policies and accused any cleaner with complaints about their level of risk of “making a joke.”

“For sure we have provided enough protection to the cleaners … including masks,” says Katherine Cheung, a representative who declined to provide her title. “I know other companies have not done enough, but we have done all.” Cheung says that Easy Living has spent “over a million Hong Kong dollars” on personal protective equipment for its staff amid coronavirus. When asked how Easy Living ensures this equipment reaches and is used by the sanitation workers, she says she “does not have to share the company’s policies.”

In several countries, including the U.S., federal guidelines stipulate that waste collectors typically need personal protective equipment like gloves and face protection. In Hong Kong, the Secretary for Food and Health says waste contractors are obliged to provide uniforms and special protective clothing for their staff, including replacing face masks “at least once at the beginning of a work shift.”

But T says she doesn’t have enough protective gear, including masks, gloves or uniforms. Since the outbreak started, her employer has been providing a box of 50 masks each month, but it’s not enough to cover the two separate shifts she works each day. Amid the global shortage of surgical masks, she’s had to source and pay for her own.

She’s not alone. According to charity Oxfam Hong Kong, 80 percent of cleaners surveyed said they have not received any training on preventing the spread of the virus. Some 30% said their companies have not provided them with masks, while of those who are provided with masks 40% said they were given less than one mask a day. Yet the population is especially vulnerable. A large portion of the city’s army of trash haulers are low-income elderly residents, a demographic particularly at risk for a severe or fatal case of COVID-19.

For T, who has an underlying health condition, all the recent, extra work has taken a physical toll.

“My lower back hurts … My legs and my feet hurt,” she says. “Recently it’s been quite bad.”

When the pain becomes unmanageable, she takes over-the-counter pain relievers. Otherwise, she applies a topical ointment, and then starts work all over again early the next morning.

Originally from Guangdong province in mainland China, T moved to Hong Kong over two decades ago, joining her husband who had emigrated earlier.

She lives with her family in an 400-square-foot apartment not far from the estate where she works. She doesn’t share her concerns about being exposed to the virus with them, certain that if they knew, they would tell her to quit.

“If we don’t have this income, it would be very difficult,” she says.

Adding to her anxiety is her fear of bringing the virus home to an older relative who has liver disease, and to another relative who suffers complications from polio. If she comes into contact with someone sick at work, there’s little chance of isolating herself in such close quarters and with a shared bathroom, so she never wears her uniform home, and takes a shower as soon as she gets back.

T belongs to the Cleaning Workers Union, which is asking the government to ensure compensation for front-line staff like sanitation workers should they catch COVID-19.

“We are asking to treat COVID-19 as [a] work injury,” says Tsz-yan Leung, organizer of the union.

T, who also collected waste during the Severe Acute Respiratory Syndrome [SARS] epidemic that ripped through Hong Kong in 2003, says she is even more scared now. The global infection rate of COVID-19 has far eclipsed the earlier epidemic, she notes, even if it has led to the loss of fewer lives in Hong Kong.

Still, after the pandemic she intends to keep doing the same job, though says she couldn’t imagine her children doing it.

“As a mother, I would be very upset to see them do this backbreaking work.” 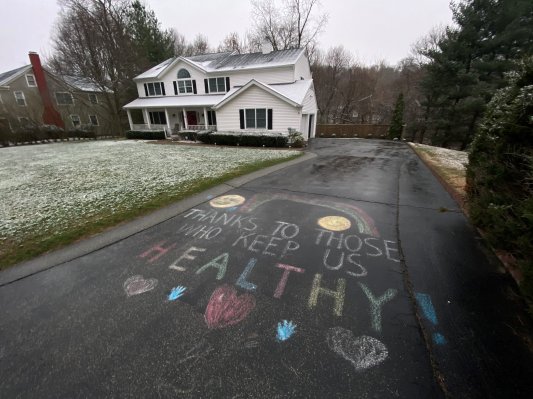 'It’s Almost Like Learning How to Be a Doctor Again.' How One New York ICU Reinvented Itself to Treat COVID-19 Patients
Next Up: Editor's Pick