An Yu’s Braised Pork Is an Engrossing Portrait of Isolation

A young woman walks into the bathroom of her luxurious Beijing apartment with a scarf hugging each shoulder. She plans to ask her husband which he’d prefer she bring on their upcoming vacation, but notices he’s facedown in their bathtub. Jokingly, she asks him if he’s trying to wash his hair. No answer. She quickly realizes he’s not moving and takes his pulse—but he doesn’t have one. He’s dead.

These first pages of An Yu’s eerie debut novel, Braised Pork, sound like the beginning of a domestic thriller. There’s the dead husband. A fancy apartment. And a wife who reveals that even though she’s shocked by the unexpected death, she wasn’t happy with her marriage to begin with. Yu writes, “He had betrayed her. Abandoned her. Failed to honour the one thing he had promised her.”

But then, as she waits for the ambulance, Jia Jia, the story’s privately frustrated protagonist, discovers a sketch of a strange fish-man on a piece of paper left near her bathroom sink. She remembers her husband describing the creature on a trip he took to Tibet—it had shown up in a dream. Jia Jia doesn’t know it yet, but the drawing will take her miles from home, changing what she knows to be true about herself. It’s this experience that transforms Braised Pork into an original and electric narrative—one that doesn’t fit neatly into any genre.

As Jia Jia picks up the pieces of her life, she wonders how much of herself she suppressed to make her husband happy. She was once an artist, but her husband discouraged her from pursuing the passion professionally. Now she can explore those desires, though it means she’ll be doing so alone. The isolation Jia Jia feels in widowhood clearly isn’t new, and is made palpable through Yu’s detached, dreamlike prose. While sitting at a restaurant by herself, Jia Jia watches a couple nearby as they talk, then look at their food. “Head down, eyes closed, she listened to their silence and yearned for it to be hers,” Yu writes.

Another author might have chosen to follow a young widow on a journey of finding love after loss. But 28-year-old Yu, who was born and raised in Beijing, smartly decides not to. Instead, she uses 30-something Jia Jia as a way to explore the tensions of contemporary womanhood. Though Jia Jia does want to find love again, that’s only a small part of the story; Yu isn’t afraid to depict loneliness as a state of being that doesn’t need to be solved or changed. As she pivots away from her protagonist’s romantic endeavors, Yu leaves room for her to embark on a more material quest: uncovering the meaning behind the sketch she found next to her husband’s corpse.

The drawing of the slithery, perplexing figure haunts the character. Yu’s language is sparse yet surreal as she captures Jia Jia’s growing compulsion to learn of the sketch’s origins, which leads her on a trip to Tibet. There, she’s pushed to contemplate why she feels so connected with such a bizarre picture—one that reminds her of the person she is constantly trying to forget.

There are some images that make us so uncomfortable, it’s impossible to look away from them. For Jia Jia, it’s initially the fish-man, but then she gets stuck on more memories of the past, which interrupt her present. In Braised Pork, Yu raises provocative questions about why we get fixated on those moments—and how they might relate to the company we crave. 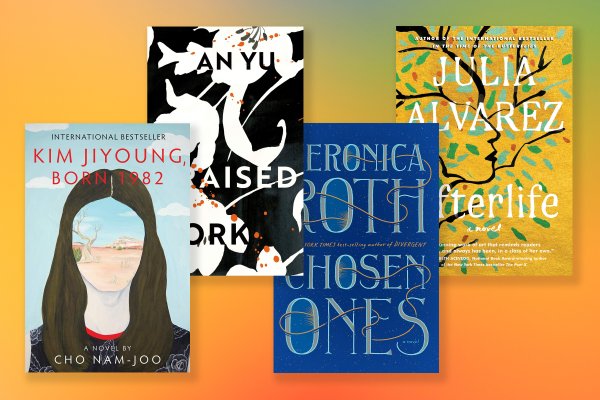 The Best New Books to Read in April 2020
Next Up: Editor's Pick