Why It’s Totally Fine to Wear Makeup During a Pandemic

I was at my book club two weeks ago—via Zoom, of course—where the featured guest was none other than internet-beloved cookbook author Alison Roman. Members asked her about pantry stocking, recipe substitutions and using fewer dishes, but finally, someone brought up what we were all thinking: What’s that lipstick you have on?

I looked at Roman’s Brady Bunch square on the screen. It was brightly lit, and she looked great with her hair neatly parted down the middle in a low bun and a swipe of red lipstick. (It was Maybelline’s Baby Lips in Crystal, she divulged.) I stared at my own square. It was poorly lit, and I hadn’t put on makeup in weeks. It hadn’t even occurred to me. As my pallid face stared back at me, I cringed a little: Why hadn’t it?

Sure, part of it is pandemic-related anxiety and figuring out how to work and take care of my 2-year-old at the same time. Plus, I’ve never been someone who wears a lot of makeup or partakes in a multi-step skincare routine. But after more than a decade working in fashion and beauty, I understand the power of putting on a little mascara and lipstick. I had just chosen not to.

As we’re all adjusting to a terrifying new world indoors and isolated from others, thinking about one’s appearance can feel trivial, selfish even. Who cares about makeup at a time like this? Don’t we have much more important things to worry about?

“Not wearing makeup is less about saying, ‘F-ck it’ and more about redirecting time and resources to focus on the things that matter,” says Julia Cheiffetz, a publisher at Simon & Schuster in New York. “Makeup does not matter.” There’s something subversive about going barefaced too, says novelist and fashion marketer Lauren Mechling. “It’s one of the few pleasures of this godawful moment, my bra burning if you will.”

Still, those who have stuck to their pre-pandemic makeup and skincare routines aren’t necessarily acting out of vanity. They may just be trying to feel sane. According to Dr. Stewart Shankman, chief of psychology at Northwestern Memorial Hospital, establishing and maintaining routines that boost one’s mood can be beneficial.

“This COVID-19 pandemic is an unprecedented time of uncertainty and uncontrollability. So people putting makeup on will give them a sense of control given what’s going on outside is uncontrollable,” he explains. “What people are doing when they’re putting on makeup or getting dressed is they’re doing something to improve their mood, and we know from research studies and interventions that when people can control their mood, it helps their sense of well-being.”

Samari Blair, a first-year medical student at University of Florida in Gainesville, had been feeling a little down after days of quarantine, online classes and staying in her pajamas. So on a recent Sunday afternoon she decided to do her hair and makeup and put on “normal-people clothes.” She took a few selfies and posted them on Twitter. “Getting dressed and putting on makeup just made me feel a lot better,” says Blair. “It made me more confident. People always say, ‘If you look good, you do good.’”

It’s hard to untangle the way we view ourselves with and without makeup from society’s longstanding expectation that women and femme people be “presentable.” A 2011 study commissioned by Procter & Gamble (which at the time owned beauty brands like Max Factor and CoverGirl) but authored by clinical psychologists at Harvard, Boston University and the Dana Farber Cancer Institute asked participants to evaluate 25 women in various states of being made up: natural, professional and glamorous. When the women were wearing either the professional or glamorous makeup looks, they were perceived to be more competent. But a 2017 study found that female college students who applied makeup before taking a simulated exam actually did better than those who didn’t. “Makeup can definitely boost confidence and mood,” says Rocco Palumbo, an assistant professor of psychology at the University G. d’Annunzio in Chieti, Italy, who was the lead researcher. “Our research shows that participants were able to improve their confidence and, therefore, improve their performance.” He adds the caveat that makeup is just one of many factors that can improve self-esteem and that individuals who don’t usually wear makeup may not see the same results.

For people with jobs that typically require businesswear for in-person meetings, video calls can come with the same set of unstated expectations. Kara Lowery, a D.C.-based lawyer, still puts on a full face of makeup, including a bright lipstick, and a nice top. “I try to make it so that I don’t look so drab,” she says, adding that on days when she’s feeling especially down and anxious she makes an extra effort with her makeup “to bring a sense of happiness” and feel better about herself.

Still, several women told me they saw an opportunity to Marie Kondo their beauty and skincare routine and consider which parts spark joy and which parts they felt constrained into doing.

“Finding out whether you’re doing these things because you want to or if you do it for other people, this is a good time to test that,” says Seattle-based writer and speaker Ijeoma Oluo. “I got ready to shave my legs and was like, ‘Uh I don’t want to.’ So then I didn’t.” Oluo, who hosts weekly Facebook Live makeup tutorials, says makeup also has allowed her to connect with people. “It’s reminding me that I’m still here,” she says. “That I can still do things I enjoy.”

Meanwhile, Charlotte Lescroart, who works for an educational-software platform in Santa Barbara, Calif., has abandoned the makeup she would normally wear to meet with clients but upgraded her skincare routine, which previously consisted of splashing water on her face. Now she cleanses with a Clarisonic she “dug out from college” and a cleanser from an upscale brand, followed by a serum and a moisturizer. “It makes me feel like I’m creating a routine for myself,” she says. “The confidence I used to get from interacting with people, now I get that from feeling confident about my skin.”

There is no right answer when it comes to how to approach beauty in these fraught times. If it doesn’t feel right for you right now, that’s fine. But if it does? There is no reason to feel ashamed. “I wouldn’t say dressing nice or putting on makeup is frivolous,” says Dr. Shankman. “There’s nothing disrespectful about it. It’s a coping strategy for people to feel a sense of normalcy.”

The day after that virtual book club, I decided to put on a little mascara and a lip tint. It wasn’t Alison Roman’s bold red lip, but it was something. In less than a minute, I felt a little less like I was living through one unending mushy day and a little more like myself.

The original version of this story misstated Julia Cheiffetz’s last name. It is Cheiffetz, not Cheiffitz. 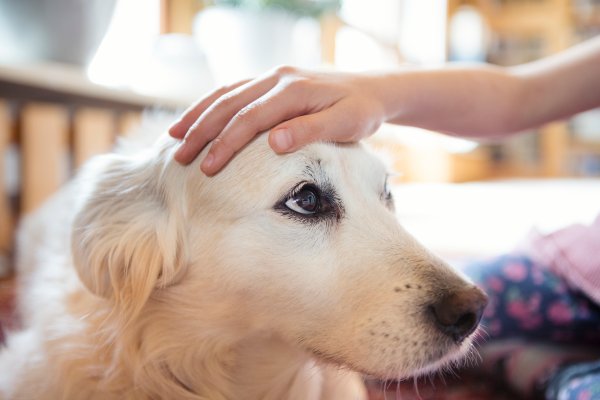 Why Pets Are Not Likely to Transmit Coronavirus
Next Up: Editor's Pick