'It Takes My Mind Off This Crazy World.' A Quarantined World Is Here for Rex Chapman's Twitter Feed

The Miami Heat's Rex Chapman (C) is defended by the Los Angeles Laker's center Vlade Divac (L) and guard Nick Van Exel (R) as he tries to get to the basket in their game 27 March at the Miami Arena.
AFP via Getty Images
By Sean Gregory

Former NBA player Rex Chapman, who spent a dozen seasons in the league from 1988-2000 with the Charlotte Hornets, Washington Bullets, Miami Heat and Phoenix Suns before holding various front office positions, hit rock-bottom some six years ago. He was fighting a painkiller addiction after undergoing seven surgeries during the last three years of his playing career. He was reduced to living in his car for a few days. In September of 2014, police in Scottsdale, Arizona arrested Chapman for stealing $14,000 worth of goods from an Apple Store over multiple occasions. He pled guilty, repaid the store, and was ordered to complete 750 hours of community service; Chapman has said he doesn’t recall the incidents, which he says took place in an opioid-addled fog.

If you would have told Chapman around that time, when his mugshot was splashed across the internet, that a half-dozen years later his popular Twitter account featuring clips of a little girl lying to her mother about liking her cooking while almost barfing it up, a 95-year-old grandmother being serenaded “happy birthday” by family members from an appropriate social distance, a baby and a dog cuddling each other, and a woman smacking a guy square in the crotch after a lame attempt at a prank would bring daily snippets of much-needed joy to hundreds of thousands of people around the world during a global pandemic, how would he have reacted?

“I would have just laughed,” Chapman tells TIME. “It sounds absurd even listening to that.”

Absurd, but it’s all true. Chapman, a former star basketball player at the University of Kentucky, went to rehab after his arrest and is now an analyst for Kentucky Wildcats basketball and NBA TV. Before the COVID-19 outbreak, he had developed a cult following for highlighting ridiculous collisions involving humans, animals, and/or rogue objects, and asking his Twitter audience whether the dustup was a “Block or Charge?” — playing off the utterly subjective basketball violation. (If a player rams into a stationary defender: charge, defense gets the ball. If the defender is moving his or her feet during the dustup: block, foul on the defense. Mostly, the refs just guess along with the rest of us.)

As the COVID-19 pandemic escalated, however, Chapman started highlighting how humans could still connect with one another despite the challenges of social distancing. On March 26, for example, he posted a video a young girl riding home from her final chemotherapy treatment; neighbors lined her street and applauded from their cars. The clip has been viewed 4.2 million times. A post showing an Italian tenor serenading Florence from a balcony during lockdown has been retweeted 25,500 times, drawn 105,200 likes, and attracted 2.5 million views. The one of an older couple turning their garage door into a beer-chugging device — just watch it — is up to nearly one million views.

Chapman now has nearly 645,000 Twitter followers, up from around 580,000 in late March. He often ends his posts with a digital rallying cry: “This is the Twitter content I’m here for” or “Stay at home. Save lives.” His feed has morphed into a daily tonic for bored, stressed-out people during a quarantine, a pitch-perfect mixture of silliness and heart, all-too needed for our times.

“I don’t care who you are, or what you believe, this has to be scary,” says Chapman, wearing a blue Kentucky basketball t-shirt, in a video interview. “If people can look at my Twitter feed once or twice a day, and get some kind of chuckle out of it, some laugh, or something to make them feel good, of just take their mind off of something going on on the television right now, just for two minutes, that makes me feel good. I’m all for that.”

Over the past few weeks, Chapman felt an urgency to add earnest appeals for social distancing. “It was taking time for people in some pockets of America to really, really understand how severe this thing is,” says Chapman. “And it’s frightening. I don’t know about a responsibility, but hey, I know that people are looking at that Twitter page right now. You can’t just put out nonsense when it comes to this stuff.”

In January of 2019, Chapman saw a video of a dolphin leaping out of a wave and bodychecking a paddle boarder into the water. “I said to myself, that’s a charge,” Champan says. He posted the clip on Twitter, asking his audience “Block or charge?” At the time, he says he had around 70,000 Twitter followers.

“Block or Charge?” quickly caught on: it’s now even a blooper show, co-hosted by Chapman, that streams on Adult Swim. “I do like the livestock ones,” says Chapman. “People out messing around with bulls. When they just get jacked up. I like it cause what are you doing out there? You deserve this, man. Whatever comes, you deserve it. I hope you don’t die. But you’ve got something coming to you.” Chapman laughs. “Those are my favorite,” he says. “And the drunk people doing stupid things.”

Chapman scours the web daily for content — he’ll put “dogs” and “heartwarming” and “feel good” into the search box — while also relying on an a network of Twitter users to send him stuff. “Two of my main sources, I can’t even say their last names, one of them lives in the Netherlands, never met him, his name’s Sander, another lives in England, his name’s Theo,” says Chapman. “Theo is a little more edgy. But both of them are spot on with the heartfelt stuff. Spot on.”

Throughout his life, Chapman has struggled with social anxiety and depression. So his close friends can’t believe he’s developed a Mr. Feel Good rep during his crisis. “I’m so not that guy,” says Chapman. “I’m faking my way though just like everybody else.” Chapman battled opioid addiction for 15 years; he’s been clean for five years, but the pandemic has thrown him off his routine. He can no longer swim, an activity that’s helped clear his head and fight any demons. He’s turned to walks, and listening to his his favorite music acts from the 80s and 90s, like Luther Vandross, Run-DMC, Anita Baker, and bingeing shows like Ozark to keep himself occupied.

While Chapman’s Twitter feed may be bringing occasional happiness to his audience, the process of maintaining and updating it, not to mention the positive feedback, has served as therapy for Chapman too. “It takes my mind off of this crazy world right now,” Chapman says. “It helps me stay out of my head a little bit.”

As his following has increased during the quarantine, Chapman has learned a lesson. “Politically, there’s been a lot of people calling for unity for the last three years,” says Chapman. “And it seemed like a portion of us haven’t really wanted that. What I’ve seen in the last three weeks are those people saying we need unity right now. Which means they’re scared.”

Chapman is now using his expanding platform to directly benefit those in need: calls for donations to his COVID-19 relief fun have helped raise more than $200,000, says Chapman, and around $100,000 has already been spent to provide food and personal protective equipment for front line workers in Kentucky and New York City. The fund plans to expand its grants to other COVID-19 hotspots. “This silly Twitter feed,” says Chapman, “is helping, helping, helping people across the country right now.” We’re here for that. 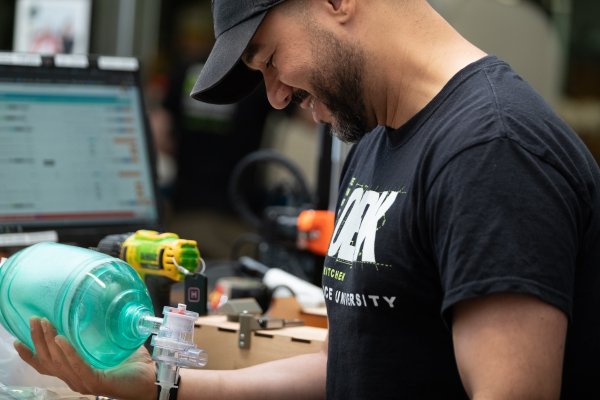 Are DIY Ventilator Alternatives a Good Idea During COVID-19?
Next Up: Editor's Pick