The Signing of the Constitution of the United States at the Constitutional Convention of 1787; oil painting on canvas by Howard Chandler Christy, 1940.
Getty Images
By Lindsay M. Chervinsky

The United States currently faces an unprecedented crisis caused by the international pandemic. The nation has the largest number of COVID-19 cases in the world and the numbers are rising exponentially. Many governors have led the offensive against the novel coronavirus in their own states, including notably California’s Gavin Newsom, Ohio’s Mike DeWine, New York’s Andrew Cuomo and Maryland’s Larry Hogan. They have pulled out all the stops acquiring protective gear for medical workers, purchasing ventilators for patients and ordering strict shelter-in-place measures to slow the spread of the virus.

But the virus is not attacking one state at a time. Scarce resources, which are common during pandemics and crises of this magnitude, have challenged coordination efforts and increased competition. It’s a problem the nation’s founders could have foreseen. After all, they knew from experience that some problems can’t be dealt with on a state-by-state basis.

During the Revolutionary War, the Continental Congress had passed a new governing document called the Articles of Confederation. After declaring independence from the British monarchy, the congressmen were fearful of strong central governments and they overcorrected a bit. Under their new system, Congress had little authority to coordinate the states’ diplomatic, military or economic efforts. Congress could pass requisitions, which were basically requests for money from the states. They had no power to enforce compliance, however, so the states frequently ignored the appeals from Congress. Furthermore, the states frequently competed with each other for land, passed taxes that harmed each other and pursued conflicting diplomatic agendas.

For example, states in New England prioritized a trade agreement with Great Britain because they wanted to sell their timber and fish to the British Navy. On the other hand, western regions demanded a treaty with Spain that would open the Mississippi River and the Port of New Orleans to American merchants. By 1787, the economy was in shambles and sectional leaders were threatening secession.

On September 17, 1787, President George Washington sent a letter to the President of Congress and attached the proposed constitution, which the delegates to the Constitution Convention had spent the last four months debating, looking to replace the Articles of Confederation. In his note, Washington argued that the “Difference among the several States as to their Situation Extent Habits and particular Interests” had caused significant challenges under the Articles of Confederation. He praised the attached constitution for providing the necessary central authority to “provide for the Interest and Safety of all” states. While the delegates didn’t understand modern medicine and they could have never predicted COVID-19, this health threat was the exact type of national crisis they anticipated.

The new federal government created by the Constitution solved many of these issues by creating a strong central authority. Congress acquired the power to levy taxes, the President and his representatives were tasked with negotiating foreign policy on behalf of all states, and states were prohibited from implementing trade policies that undercut each other. Most importantly, the Constitution granted the federal government broad authority in times of crisis, permitting Congress to “make all Laws which shall be necessary and proper” to carry out its responsibilities.

Washington didn’t hesitate to use that newly created power when faced with a crisis. In 1794, rebels in western Pennsylvania refused to pay excise taxes on distilled whiskey and burned down the house of the local tax official. After attempts at peaceful negotiation failed, Washington ordered militias from Virginia, Pennsylvania, New Jersey and Maryland to subdue the rebellion.

After eight years in office as the first President of the United States, Washington announced his intention to retire. In his Farewell Address to the American people, he encouraged his fellow citizens to “properly estimate the immense value of your national union to your collective and individual happiness.” He urged them to reject “every attempt to alienate any portion of our country from the rest, or to enfeeble the sacred ties which now link together the various parts.”

That advice is needed now more than ever. We must encourage our public officials to work together, applaud their efforts to help each and contribute in whatever small ways we can. But the founders were right: some crises can’t be dealt with on a state-by-state basis. As cases of COVID-19 explode throughout the world, it’s clear that viruses don’t care about borders. The only way to combat the virus is to implement a coordinated, national response, and it is only together that we’ll be able to start the healing process.

Lindsay M. Chervinsky is a historian at the White House Historical Association. Her book, The Cabinet: George Washington and the Creation of an American Institution, will be published by Harvard University Press on April 7. 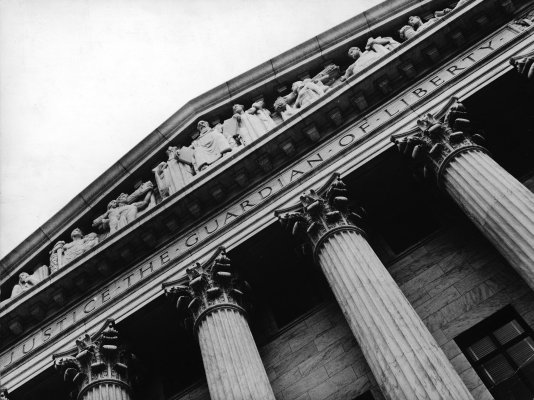 How U.S. Presidents Tried to Stop People From Insulting Them
Next Up: Editor's Pick