For years, President Trump has touted low oil prices as a win for American consumers and used his position to try to keep them that way. “Good for the consumer, gasoline prices coming down!” he tweeted on March 9.

But as the new coronavirus has brought much of the world economy to a halt, it has also helped trigger a collapse of oil prices that has forced Trump to reverse course and try to raise prices. In recent days, he has threatened to impose tariffs on oil imports, called the leaders of Saudi Arabia and Russia to persuade them to cut production and pushed his administration to find ways to buy oil itself.

The question now is how far Trump is willing to go to fight back. On Friday, he brought top U.S. oil and gas executives to the White House for a closed-door meeting with senior members of the administration and a handful of Republican senators. “We’re going to take care of our energy business,” he said at the White House on Saturday. But intervention is risky. Helping some in the domestic oil industry could hurt others, and cost jobs among the losers. Fighting back abroad could fracture old alliances and spread unrest in the Middle East. And any action by the White House could have knock-on effects for the fight against climate change.

The current industry tumult is the result of two things: reduced demand thanks to the coronavirus-driven decline in economic activity and increased supply from a price war between Russia and Saudi Arabia. The reduced demand is simple to understand: factories are idle, airlines are flying less and people are staying at home. More complicated is the supply glut: talks between OPEC+ members, a cartel of countries that control much of the world’s oil production, fell apart Mar. 6 as Russia and Saudi Arabia failed to agree on a pact to reduce production. Instead, the two countries, the world’s second and third largest producers of oil, announced that they would ramp up production, further driving down the price.

Having supply and demand shocks hit the oil market at once is rare, and challenging. “For the first time in decades, we are seeing both of them,” said Fatih Birol, the head of the International Energy Agency at an online Atlantic Council event on Mar. 26. “This will have, I’m sure, significant consequences for the next years to come.”

In America, the immediate problems are the survival of energy companies and the job security of the nearly half a million people they employ. There is now an unbridgeable gap between the cost to drill for oil domestically and the price paid for oil on the market. Producers in Texas, which has experienced a fracking boom in recent years, need oil to trade around $50 per barrel to break even on a new well, according to a survey from the Dallas Fed. Oil prices in Texas dipped just below $20 per barrel in recent weeks. Oil companies are running out of places to store oil they produce, which means an even bigger drop if they run out space. “Every little nook and cranny is full of oil,” says Deborah Byers, says U.S. oil & gas leader at consulting firm EY.

Trump and his allies on Capitol Hill are fully aware of the problem: the fortunes of many of the president’s wealthy supporters in the industry are on the line as well as and the employment of workers whose jobs are heavily concentrated in red states like Texas, North Dakota and Louisiana. Beyond workers directly employed in the industry, many more rely on them to support the local economy in oil and gas heavy regions. “There are jobs that are hanging in the balance,” Sen. Ted Cruz, a Texas Republican, told Trump ahead of the White House meeting. Without action, “we’re going to see bankruptcies at a level that this country hasn’t seen in decades,” Cruz said.

Trump has suggested a slew of different approaches to help. At first, he tried to direct the U.S. to buy $3 billion in oil for its Strategic Petroleum Reserve, an idea rejected by Congress. As recently as Saturday, he floated tariffs on oil imports. Most importantly, he’s hopped on the phone with both Russian President Vladimir Putin and Saudi Crown Prince Mohammed bin Salman to try to push for a compromise. (The two parties initially agreed to discuss potential production cuts in an emergency OPEC+ meeting on Monday, which was later pushed to April 9). “We’ll get our energy business back,” Trump said to oil executives gathered at the White House Friday “I’m with you 1000%.”

Among the players at Trump’s meeting last week were top executives from a handful of key players in the U.S. oil industry, including the leaders of oil majors like ExxonMobil and Chevron as well as those of independent producers like Continental Resources. But for all the worry in the oil and gas industry, its leaders don’t agree on how to solve the problem. Many small producers, which face the biggest threat and could go bankrupt in the coming months, are desperate for any help, even if it means government intervention like tariffs. Big players with more cash are less inclined to push such steps, knowing they can wait it out. The American Petroleum Institute, the powerful industry lobbying group, wrote a letter to Trump last week opposing tariffs.

The sharp decline in oil prices also presents national security and geopolitical concerns. Sustained low oil prices will lead to a huge budget shortfall in many developing countries, from Ecuador to Oman. That fiscal crunch would almost certainly exacerbate challenges these countries face battling the coronavirus pandemic. The fate of developing countries may not sound like a concern for a president who has declared “America First” as a motto of his administration, but oil has shaped U.S. foreign policy since the presidency of Franklin Roosevelt and Trump is no exception. Just in recent weeks, the administration has used low oil prices to pressure geopolitical foes like Iran and Venezuela.

The bigger long-term geopolitical consideration concern may be the implications for the Middle East, where the U.S. still keeps thousands of troops. Iraq’s fiscal breakeven point for oil, the price that is necessary for an oil exporting state to balance its budget, is $60 per barrel, according to the International Monetary Fund. “The revenues alone will not be enough to pay the salaries of employees, which is very important for the social stability of the country,” said Birol, noting that oil revenue funds 90% of the country’s budget.

In recent years, Republicans in the administration, including Trump, have spoken plainly about American involvement in the Middle East as a move to protect oil. At the meeting with oil executives on Friday, at least one Republican suggests Saudi Arabia’s over-supply of oil, and the threat it poses to American jobs, could change that long-running strategic interest. “We have a great military that’s protected Saudi Arabia for decades,” said Sen. Dan Sullivan, an Alaska Republican, at the White House Friday. We “have some legislation that could possibly change that if they don’t start cooperating.”

One issue at stake in the White House’s approach to oil almost certainly isn’t on Trump’s mind: climate change. Democrats opposed Trump’s efforts to include support for the oil and gas industry in economic stabilization legislation, and climate activists quickly decried Trump’s White House meeting. Politics aside, the world needs to wean itself off oil to avoid catastrophic climate change in the coming decades, and yet Trump’s stated goal is to further grow and entrench the industry. The oil price volatility of recent weeks could weaken the investment case for oil, speeding that transition. Alternatively, low oil prices could reduce the economic incentives to reduce emissions.

Either way, analysts say whatever support Trump may offer the industry may help avoid a bloodbath in the near term, but the long-term writing is on the wall: the industry needs to change or disappear. 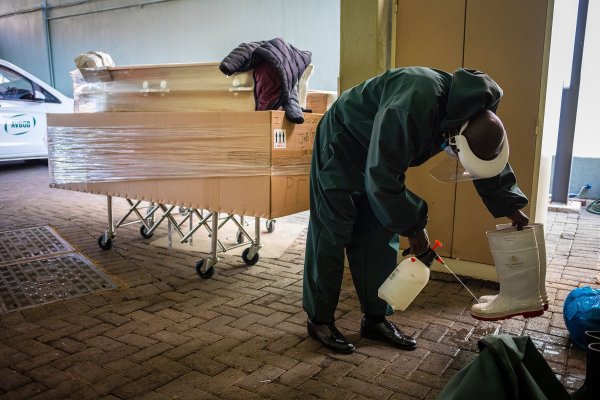 The U.S. Can Only Defeat COVID-19 Through Global Solidarity
EDIT POST