The Coronavirus Will Upend My Grandmother’s 50-Year Passover Tradition. But We Stay Apart So We Can Be Together.

I could hear my mom in another room once again asking someone if the kosher beef ribs had arrived. Or maybe it was the kosher potato chips. I’d been overhearing calls like this all week, check-ins with grocery stores in Houston, where she and my dad live. “Hello,” she’d said, often greeting the person by name. “Any chance the kosher-for-Passover hot dogs arrived?”

This time, though, I turned to my husband: “Which one of us is going to tell them they have to tell her that Passover isn’t happening?”

Her, he knew, meant Mamaw, my maternal grandmother who had hosted Passover seders for about 50 years.

Knowing what we do now about the coronavirus outbreak, it seems obvious that families will not gather for the Jewish holiday this year the way they have in years past. But at the time, about a month ago, the situation was only starting to come into focus. Just over a week before that particular phone call, 13 family members had gathered in our apartment in New York for my younger son’s 2nd birthday. By then, we had all upped our handwashing, and knew enough that my dad bought individual packages of M&M’s to put out so we wouldn’t all touch the same candy in a bowl, but the CDC had not yet issued its guidance on social distancing. “If you are not sick, if you are not in the vulnerable category, you should be going about your life,” New York City Mayor Bill de Blasio said a few days later. The day after that, my 4-year-old’s school was canceled, but only, at that point, for two weeks. Yet with each passing day, it was becoming increasingly clear that things weren’t going to return to normal before Passover, which starts on April 8 this year, and maybe not for a long while after that.

Hearing my mom’s persistent phone calls, which suggested forward movement on something that would inevitably be canceled—or at least should be, if my grandmother could be convinced—made me anxious. Mamaw values family above all else and is stubborn. Mamaw is also under the care of a pulmonologist. On the holiday in which Jewish people around the world open their doors and proclaim, “Let all who are hungry come and eat. Let all who are needy come and celebrate the Passover,” it would be risky for her to open her door to anyone.

Mamaw’s Passover hospitality has never stopped at the seders. Because my sister and I attended Jewish elementary school and middle school, our spring breaks always coincided with the holiday. We were therefore able to eat every lunch and dinner that week at Mamaw and Pop’s house. (Pop passed away in 2007.) While my family adhered to some of the Jewish dietary laws the rest of the year–no bacon but plenty of shellfish, for instance–during Passover, for reasons I can only explain as “because we’ve always done it like this,” we suddenly became more observant: Every product we consumed had to be specifically labeled as kosher for Passover. Mamaw, who loves fried shrimp, keeps a kosher home and has separate Passover dishes and silverware, so it just made sense for us to go there for our meals.

It was hardly a burden. Over the course of the week, Mamaw would make matzo-meal-crusted fried chicken, farfel mac and cheese and matzo lasagna. We’d keep a big box of Manischewitz potato chips in one of her closets, and when one bag would run out, we’d simply open another. This was all on top of the leftovers from the first two nights.

For decades Mamaw and Pop stood in their driveway together at least a month ahead of time barbecuing beef ribs, mini-hamburgers, hot dogs, brisket and chicken on the pit. As the holiday got closer, Mamaw would make corned beef, matzo ball soup and charoset and put together individual seder plates for up to 30 guests. My mom has taken on more of the work in recent years, but the early planning and the abundance have remained. Before my parents visited New York in March, they had already taken care of “hamburgers, broccoli casserole, squash casserole, oven barbecued chicken and two cakes.”

Given all the options, it didn’t even occur to me not to keep Passover as strictly as I did. But during my sophomore or junior year of college, I started to rethink this rigidity. None of my friends observed the way I did, so if I wanted to stay the course, it would just mean more meals on my own. I decided I would do my best going forward, but I wouldn’t obsess over the label on the box. I’d eat in restaurants and order dishes that didn’t blatantly run afoul of the rules. Holidays, I told myself, are supposed to be communal experiences with family and friends, not isolating ones.

Since I moved away from Texas nearly 20 years ago, Mamaw and I have had versions of the same exchange.

Her: I was thinking about calling you, but I didn’t want to bother you.
Me: You’re not bothering me! If I can’t talk, I won’t pick up and I’ll call you back.
Her: You’re right, I’ll remember that.

But aside from birthdays and anniversaries, she rarely calls, always afraid she’ll catch me at a bad time. The truth is, I don’t call her much either. We both rely on my mom to keep us updated on each other’s lives. It shouldn’t have taken a pandemic to change that, but here we are.

In the weeks since we’ve all been told to stay home, Mamaw and I have each picked up the phone a little more. Sometimes when FaceTime and children are involved, all she can do is watch her grandkids run wild and that’s enough to make the call worthwhile. But in one of our early one-on-one conversations, she mentioned how bad she felt about having to cancel the seders, as if the decision were of her own volition and not due to a public health crisis.

It was on a call a few days later that she casually mentioned all the preparation my mom had been doing. I was mystified. There have been enough family text chains lately that surely I would know if seder, even a scaled-down one, was still on. It was canceled, right? Well, yes, but despite the family not being able to congregate, my mom was cooking all the food anyway. She had emailed those who typically come to Mamaw’s with a list of 15 items and told them to choose what they wanted. She would create care packages for them to drive by and pick up.

I know this Passover will not be easy for Mamaw. Loneliness intensifies on days when you are not supposed to be alone. But what I hope she can remember as she exchanges holiday greetings through screens is that the physical separation will help ensure future togetherness.

In August Mamaw will turn 90 and my parents will mark their 40th anniversary. My paternal grandfather and grandmother, Grammy and Grandpa, will turn 85 in October and February, respectively. The plan has been for the family to meet in Houston over Labor Day weekend to celebrate these occasions all at once. Traditionally, at the end of the Passover seder, we say, “Next year in Jerusalem.” This year, my wish is more personal: September in Houston. 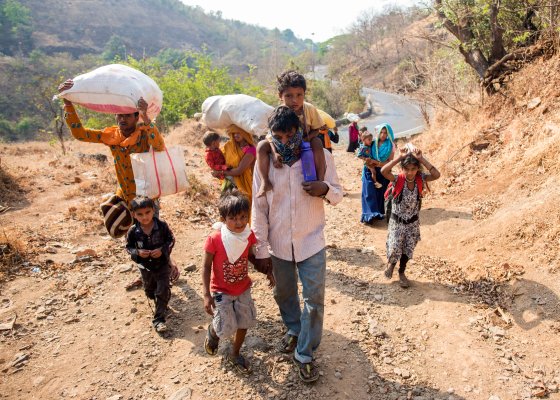 A Major Coronavirus Outbreak Will Test India to the Limit
Next Up: Editor's Pick