Traders work through the closing minutes of trading on the New York Stock Exchange floor on February 25, 2020 in New York City.
Scott Heins—Getty Images
Ideas
By Zachary Karabell
Karabell is an author, investor, and commentator. His latest book is Inside Money: Brown Brothers Harriman and the American Way of Power.

The passage of the pandemic stimulus bill to the tune of at least $2.2 trillion dollars was heralded as a major step towards staunching the massive economic toll of the near-complete shutdown of the United States. But of the many moves made by the federal government, the effects of that stimulus bill may ultimately pale in comparison with the radical measures enacted by the Federal Reserve. We are in uncharted and deep waters, but none may prove as revolutionary as what the Fed is about to do.

Graced by Congress and by the Treasury Department, the Federal Reserve is committed to using its balance sheet to inject more than $4 trillion into the economy. That is not a typo. And it is, in fact, likely to be substantially more than that by the time the pandemic crisis has subsided. This will not end up directly in the pockets of individuals, but it will flood the financial system with unprecedented amounts of money and provide a cushion and a floor for almost any tradeable asset.

And by any tradeable asset, that means money market funds, corporate bonds, municipal bonds, bank lines of credit, student loans, mortgage-backed securities, and according to Jerome Powell, the chairman of the Federal Reserve, perhaps even stocks. Asked about the possible outer limits of what the Fed might buy, Powell said, with unusual candor, that in a time of pandemic, “We’re trying to create a bridge from our very strong economy to another place of economic strength, and that’s what our lending really does. It’s very broad. It’s across small, medium and large businesses.” And it extends as well to state and local governments strapped for cash as tax revenues evaporate. It extends, in fact, to just about everything and anything imaginable.

It is impossible to overstate how radical a departure from past precedent these moves are. During the Great Recession of 2008-2009, the Fed cut interest to zero (as it has now) and then began to experiment with what it called “quantitative easing” on a multi-trillion dollar scale; it began to buy up bonds and act as a lender of last resort to large financial institutions that were facing potential insolvency, and to European banks as well as the European Union faced its own crisis into 2011. But as innovative as that was, it took many months for the Fed to act then, after the financial crisis had already metastasized into an economic collapse, and its buying was limited to specific and rather arcane corners of the financial markets.

Today, the Fed has acted within days and it has unleashed its emergency lending powers to a degree never seen or even really contemplated before. Across the Atlantic, the European Central bank is engaged in similar activities, though by statute, it has more limits on what it can do. Because of the global connectivity of financial markets, however, the Fed’s guarantees will also create ballast for foreign markets, which is needed to keep American markets stable. We can close borders to halt the spread of people and attempt to stem the tide of the virus; we cannot halt the flow of capital without bringing the entire system crashing down world-wide.

The Fed understood even before Congress that the health-crisis of the pandemic and the subsequent economic crisis caused by the shelter-in-place orders and shuttering of businesses, travel and events would easily morph into a financial crisis that could be magnitudes greater than what happened in 2008-2009. What they are doing now is not the same as “bailing out the banks” that caused so much outrage in the last crisis. It is more akin to “bail out everyone and everything” with the understanding that we might just emerge semi-intact from a health crisis and a sharp recession but that a financial crisis on top of that could be too much to manage. Just as the human body can only sustain a limited number of simultaneously organ failures, society can only withstand a few simultaneous systemic shocks. If the financial system – the conduit for payments, cash, payrolls and even those government refund checks soon to be disbursed – were to crash now, then you really could have the prospect, feared briefly in the fall of 2008, that ATMs would run out of cash and the financial system would implode.

What comes after this period of Fed intervention is anyone’s guess. But what it spells for the months ahead is a peculiar situation where financial markets – stocks, bonds, 401Ks, college savings, health savings accounts, pension plans – all look dented but decent even as the underlying real-world economy looks atrocious; a situation where stock markets have a bad but not catastrophic year while jobs losses temporarily mount into the tens of millions, small-business are imperiled and the weakest of large companies likely go bankrupt. We could, as we have already started to over the past two weeks, have a deep disconnect between financial markets and the real world, one that indirectly benefits not just companies but anyone with a retirement plan or any invested savings. The relative stability of financial markets will, however, stand in confusing contrast to the rapid decline of real-world economic activity.

In the next month, companies will begin reporting results that will reflect the sudden plunge in activity from mid-March on. April will be much worse. Given that stocks trade based on what investors believe to be the future earnings of companies, and that interest rates are supposed to reflect how risky the borrower is, the financial world will be trading based on what people assume will happen once this anomalous shut-down period comes to an end, bolstered by a Federal Reserve with a nearly limitless willingness to buy and lend. In the real world, it would be like an institution set up to keep the restaurant industry stable even while most restaurants are closed: they would keep cooking meals and the restaurant Fed would pick up the tab even if no one was seated or eating anything.

Given that this violates every prior rule and departs from any prior rule book other than a more limited experiment after 2008, it’s hard to say if this will end well. The longer the economic crisis lasts, the harder it will be for the Fed to stave off the tide. But what the Fed knows, and what we all know, is that in the absence of what it is doing, it would and likely already would be very, very bad. We would be confronting a financial crisis exceeding the scale of 2008-2009 while trying to grapple with the greatest pandemic threat in a century and a real world economy shedding millions of jobs. That would be too much to ask any system. We have plenty of problems right now; thankfully, and at least for the time being, financial implosion is not one of them. 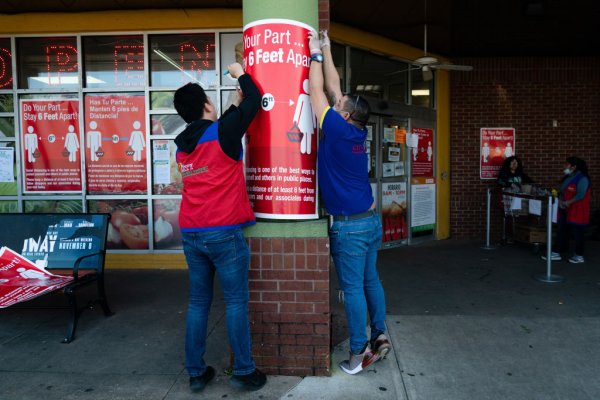 If Congress Is Serious About Disaster Recovery, It Needs to Create This New Jobs Program
Next Up: Editor's Pick