Chris Smalls, an Amazon fulfillment center employee, said the company fired him after he led a strike at a warehouse in Staten Island, New York, over coronavirus safety conditions.

“Taking action cost me my job,” Smalls said Monday in a Bloomberg TV interview. “Because I tried to stand up for something that’s right, the company decided to retaliate against me.”

A group of workers at the Staten Island fulfillment center walked off the job Monday to demand Amazon close the facility for extended cleaning, the latest in a wave of virus-related protests. They say a number of their colleagues there were diagnosed with COVID-19. Organizers say more than 60 workers participated in the protest.

In a statement Monday night, New York State Attorney General Letitia James called Smalls’ firing “immoral and inhumane.” James urged the National Labor Relations Board to investigate the incident and said her office “is considering all legal options” as well.

Amazon confirmed it fired Smalls, saying he violated safety regulations, including failing to abide by a 14-day quarantine required after being exposed to an employee with a confirmed case of Covid-19.

“Mr. Smalls received multiple warnings for violating social distancing guidelines and putting the safety of others at risk,” Amazon said in a statement. Smalls “was asked to remain home with pay for 14 days, which is a measure we’re taking at sites around the world. Despite that instruction to stay home with pay, he came on site today, March 30, further putting the teams at risk.”

Smalls called the company’s claim “ridiculous” and said he was being retaliated against for his activism. Federal law protects the right of employees to engage in collective action, including strikes, to protest working conditions.

“I’m still going to continue to fight for those people inside of that building,” he said.

Amazon also disputed the number of workers involved in the protest, saying it was 15 of more than 5,000 employees at the Staten Island site.

“Like all businesses grappling with the ongoing coronavirus pandemic, we are working hard to keep employees safe while serving communities and the most vulnerable,” the company said.

—With assistance from Emily Chang and Omar Kasrawi. 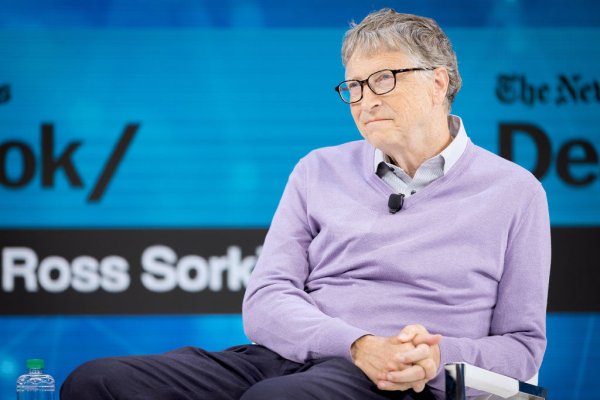 Bill Gates Announces Departure From Microsoft's Board, Capping Years of Radical Change
Next Up: Editor's Pick