John Prine, the resilient singer-songwriter who imbued his tales of American working-class life with both bleak despondence and uproarious wit, died on April 7 from complications of the coronavirus. He was 73.

On March 20, Prine’s wife Fiona announced that she had tested positive for the virus. Prine himself was hospitalized six days later and intubated shortly thereafter, leading his family to share the news of his critical condition in a Twitter post. On March 30, Fiona announced that her husband was stable but added, “that is not the same as improving… He needs our prayers and love.”

Over half a century, Prine churned out heartfelt and unforgettable songs like “Angel From Montgomery,” “Sweet Revenge” and “In Spite of Ourselves,” gaining the respect of Bob Dylan, Johnny Cash, Bruce Springsteen, Bette Midler and many other music legends. After starting his own label in the 1980s, he became a symbol of fierce independence for younger musicians who longed to forge their own way, whether in between genres or outside the major label system.

Prine endured two bouts with cancer that forced him to re-learn how to sing and deepened his idiosyncratic voice. But he pressed on, achieving his highest-selling album in 2018 and criss-crossing the country to perform and impart wisdom onto younger musicians. This summer, he planned to tour North America and Europe.

He was an inductee of the Songwriters Hall of Fame and a Grammy Lifetime Achievement Award recipient. He was invited to perform at the Library of Congress by U.S. Poet Laureate Ted Kooser in 2005. In 2015, Kacey Musgraves wrote a song saluting him and his iconoclastic spirit: ”I ain’t good at being careful / I just say what’s on my mind / Like my idea of heaven / Is to burn one with John Prine.”

Prine was born in 1946 in Maywood, a blue-collar suburb of Chicago; he was the grandson of a Kentucky miner and the son of a tool-and-die maker. As a young man he served in the army in Germany, working as a mechanical engineer, before heading back home to become a mailman. The mentally unstimulating job allowed him to dream of a music career and write songs in his head while on his route: “Once you know you’re on the right street, there really wasn’t that much to the job,” he said in 2014. “There wasn’t much to do but use your imagination.”

Prine began playing open mic sessions at Chicago bars, where word-of-mouth buzz about his wrenching lyricism quickly spread. One night in 1970, the movie critic Roger Ebert walked into the Fifth Peg where Prine, still a mailman, was playing a set that included soon-to-be-classics like “Angel from Montgomery” and “Sam Stone.” Impressed, Ebert penned Prine’s first ever review, writing, “You wonder how anyone could have so much empathy and still be looking forward to his 24th birthday.”

The next year, the country superstar Kris Kristofferson saw him play at another club. “It must’ve been like stumbling onto Dylan when he first busted onto the Village scene,” Kristofferson said later. He invited Prine to New York, where the pair shared the stage at the Bitter End in front of an industry crowd. The next day, Prine signed to Atlantic Records.

Prine quickly enmeshed himself in the ’70s folk scene and became revered among musicians for his songwriting prowess. He brought to life despondent war heroes (“Great Society Conflict Veteran’s Blues”), lonely elders left behind by society (“Hello in There,” “Angel from Montgomery”), towns destroyed by corporate greed (“Paradise”). “Prine’s stuff is pure Proustian existentialism. Midwestern mindtrips to the nth degree,” Dylan said in 2009. “And he writes beautiful songs.”

Musically, Prine’s sound pulled from country, roots, and rock and folk traditions. “I never fit in with straight country. I never really fit in with rock ’n’ roll,” he told GQ in 2018. While his sonic explorations mystified his label and country radio stations—his ’70s Atlantic albums never climbed above 66 on the Billboard 200—they instead became beloved by a rising generation of songwriters who refused to be pinned into one lane.

“I know the record companies had no idea what to do with John Prine,” John Mellencamp, who was scuffling as a failing rocker named Johnny Cougar at the time of Prine’s rise, said in 2017. “And he said, ‘To hell with it. I’m gonna do what I’m gonna do.’ And he did. John taught me a lot, whether he knew it or not.”

Eventually, the walls between genres began to come down, paving the way for Americana, a catch-all term for musicians drawing from many traditions. More recently, Prine has become a mentor to a younger flock of rulebreakers, from Musgraves to Sturgill Simpson to Brandi Carlile. Justin Vernon, who performs as Bon Iver, called Prine his favorite songwriter and led a Prine tribute concert at his own festival Eaux Claires in 2017.

“Right now it seems like, without changing anything I ever did, I fit right into the Americana thing because it’s stuff mixed together: all different American musics mixed together,” Prine said in the 2018 GQ interview.

Prine was nearly as influential as a businessman as he was as a musician. Years before “indie” became a term, Prine was fed up with being creatively stifled by labels and decided to found his own, Oh Boy Records, in 1981.

“People thought we were crazy for starting a record company,” he told Billboard. “They thought I was really shooting myself in the foot.”

Prine sent out records through the mail and relied on crowdsourced funding. But the gambit worked: fans sent in a large enough volume of checks for Prine to record his next album without the need for a label’s advance.

Oh Boy Records now stands as the oldest independent record company in Nashville; in 2015, it became a family business, with his wife, Fiona Whelan Prine, serving as a managing partner and his son Jody Whelan as director of operations. Oh Boy also set a template for the rising crop of artists, from Chance the Rapper to Jack White, who chose to take their music into their own hands.

The last two and a half decades have not been easy for Prine. In 1998, he was diagnosed with squamous cell cancer, resulting in a surgery that removed a piece of his neck and nerves on his tongue. The surgery deepened his voice to an unrecognizable growl, but Prine took intensive speech therapy and adapted. In 1999, he recorded a duets album that included the song “In Spite of Ourselves” with Iris DeMent, which became one of the biggest hits of his career.

In 2013, Prine was diagnosed with lung cancer and had part of his lung removed. He rebounded and started touring again, taking a younger generation of singers like Jason Isbell and Margo Price on the road with him. In 2018, he hit his commercial peak, when The Tree of Forgiveness hit #5 on the Billboard 200. That album was voted as one of the year’s best by the Village Voice’s Pazz & Jop Music Critics Poll. Earlier this year, Raitt honored Prine for his lifetime achievement award at the Grammys, calling him “my friend and hero.”

On his final album, Prine showed off his comedic sensibilities to their fullest, especially on the song “Lonesome Friends of Science,” which bemoaned Pluto’s planetary demotion.

He never stood a chance no how /

When he got uninvited to the interplanetary dance /

Once a mighty planet there, now just an ordinary star /

Hangin’ out in Hollywood in some ol’ funky sushi bar.

And on “When I Get to Heaven,” Prine contemplated his own mortality with a lofty, personalized vision of heaven. “I’m gonna get a cocktail: vodka and ginger ale,” he sang. “Yeah, I’m gonna smoke a cigarette that’s nine miles long / I’m gonna kiss that pretty girl on the tilt-a-whirl / ‘Cause this old man is goin’ to town.” 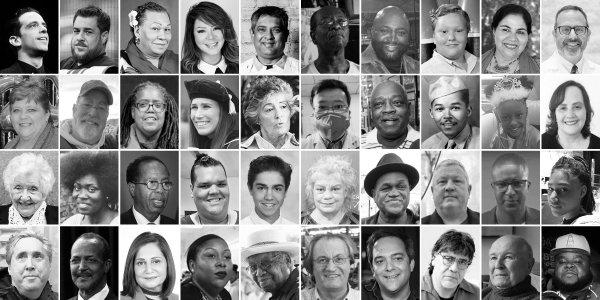 The Lives Lost to Coronavirus
Next Up: Editor's Pick