An emergency room physician in Washington state who had publicly criticized his workplace, PeaceHealth St. Joseph Medical Center, for not doing enough to protect its workers from coronavirus, now claims he has been let go from his role at the hospital.

Ming Lin, an emergency room physician in Bellingham, Wash., had regularly posted on Facebook concerns he has about the safety of the hospital’s staff as it works during the global COVID-19 pandemic. The Seattle Times reports that he has become something of a “a local cause célèbre” because of his repeated requests for more medical supplies and more protective measures for health care workers.

In Facebook posts over the past couple weeks, Lin has argued that the St. Joseph Medical Center had not done enough to keep up with the influx of coronavirus patients as the crisis has ramped up throughout the country. As of Sunday morning Eastern Time, Washington state has at least 4,312 confirmed cases of coronavirus, and at least 189 confirmed deaths, according to a tracker by Johns Hopkins University.

In separate posts, Lin alleged that potential COVID-19 patients have been kept in waiting rooms without masks and nurses have not been given enough protective equipment. He has also argued that the hospital needs to push for more availability of COVID-19 testing.

On Friday, Lin posted on Facebook, “I want to thank everybody for all their support. Unfortunately I have been terminated from PeaceHealth by my employer Teamhealth.” He had worked there for 17 years, according to the Times.

When asked for comment, a spokesperson for TeamHealth, the firm that contracts with the hospital’s emergency department, said in a statement to TIME, “This is a very difficult and challenging time for everyone, especially those who are involved in caring for patients. TeamHealth values the hard work of our doctors, who are doing heroic work on the front lines of the pandemic. We all share a common goal – providing high quality care to patients while maintaining the safety and well-being of our doctors.”

The spokesperson added that Lin “has not been terminated by TeamHealth and we are committed to engaging with him to try to find a path forward. Now more than ever, we need every available doctor, and we will work with Dr. Lin to find the right location for him.”

During a press call Saturday afternoon, when TIME asked if PeaceHealth could confirm that Lin’s contract with the hospital had been terminated even though he’s still employed by TeamHealth, Charles Prosper, the chief executive of the PeaceHealth Northwest network said, “So we have a contract with TeamHealth. TeamHealth determines the physicians that it provides to our hospital. So I can’t speak to any more specifics about what TeamHealth may have said to you.”

Lin did not respond to TIME’s request for comment.

A Youtube video that Lin shared on his Facebook said that Lin received a text on Friday from Dr. Ralph Baine at TeamHealth that said, “You need not show up to work, your shift has been covered.” The video added that “shortly after, [Lin’s] termination was confirmed by his director.”

This week, PeaceHealth announced more protective measures for its patients and staff. On March 23, it announced temperature checks would be instituted at all hospital and clinic entrances and that it would suspend all elective surgeries until further notice.

In a March 25 article in The Bellingham Herald, Prosper said the hospital had “adequate” staff and supplies to fight COVID-19.

In response, Lin posted on Facebook on March 26, “SHAME ON PEACEHEALTH,” and wrote that “reliable sources” have told him that the operating room was only allocating one surgical mask a day to staff.

The Times reports that Lin said his supervisors threatened his employment after he first began publicly speaking out against the hospital, and that he was told to take down his social media posts, which he refused.

According to The Bellingham Herald, “several” members of the hospital’s staff have been diagnosed with COVID-19. However, The Herald reports that the hospital maintains that none of those staff members were exposed to the virus through their work with patients.

“I don’t really feel they fully comprehend the potential damage to health care workers,” Lin said in the YouTube video posted on Friday. In the video, he urged the hospital to make every patient and staff member wear a mask, because “every patient is potential COVID until proven otherwise.” He also called for a quarantine room, and asked that the triage of potential coronavirus patients be moved to a separate area.

On the Saturday press call, PeaceHealth shared more steps it was taking to protect its staff. Hospital leaders said they would utilize more local labs for testing and said the hospital was taking steps to decrease ER volume to prepare for the coming surge of COVID-19 patients. The hospital also said it was making sure all patients with COVID-19 symptoms are wearing masks and that they’re being “fast tracked” through a designated area. The hospital said it has a tent to treat potential COVID-19 patients but has not yet needed to use it.

PeaceHealth St. Joseph is the only emergency facility for around 250,000 people in the Northwest of Washington state, according to the Times.

“Where is the place that has the most highest concentration of COVID? [That’s] the hospital,” Lin said in the video posted on Friday. “We are sitting on COVID patients, and we’re not protecting ourselves. And as a result we are spreading [germs] to our family, our community.” 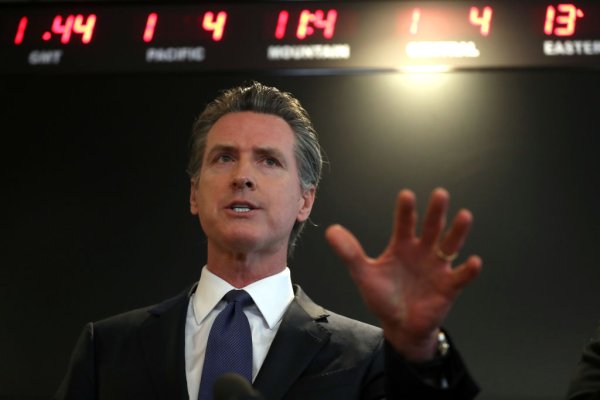 California Gets '170 Broken Ventilators' From Feds
Next Up: Editor's Pick