The 5 Best Songs of the Week, from Dua Lipa to Bright Eyes

Dua Lipa‘s sophomore album Future Nostalgia is here to soundtrack all of our Zoom dance parties for the foreseeable future. Plus: Bright Eyes is back with the appropriately melancholy first single “Persona Non Grata,” Rihanna graces us with her presence on PARTYNEXTDOOR’S new album, Oliver Malcolm is just getting started with his unusual stylistic blend on “Helen,” and Tom Misch teams up with Yussef Dayes for some flawless jazz improvisation on “Kyiv.”

Dua Lipa could have gone in another direction. After her inescapable 2017 song “New Rules” and accompanying debut album was a success, the British-Albanian pop star was primed as the fresh face and voice of British pop. That means access to the industry’s top songwriters, producers and lyricists who could guarantee her sophomore follow-up would be a mainstream pop hit, with big-name features if she so chose. But Lipa didn’t go by that playbook. Her new release Future Nostalgia is a full-throttle disco dance album with no features, although she savvily tapped some of the best producers and co-writers in the game (Jeff Bhasker, Tove Lo, Ian Kirkpatrick, Julia Michaels) for behind-the-scenes work. Still, Lipa has a credit on every song — and it’s only her honeyed voice that we hear. Its retro inspirations may have been a risk, but it’s a swing that connects. “Break My Heart” is just one of the album’s propulsive new songs, bouncy and sparkling with a get-up-and-dance spirit. It belongs to a different world than the one we’re currently living in, confined to homes and solitude. Many artists are postponing releases until after the worst of the coronavirus crisis has passed; we are fortunate that Lipa chose to give us respite in the form of this glorious escape.

There’s something about the tremble of singer-songwriter Conor Oberst’s voice that makes you stop to consider. On “Persona Non Grata,” Oberst and his Bright Eyes bandmates reunite after nine years of pursuing their own projects with a song that mixes appropriate angst and lyrical specificity with unusual new musical choices. (Yes, those are bagpipes.) The folk-rock mix here is a rolling, endless series of skewed images, as Nebraska-born Oberst is known for: “Combat boots, fallen leaves, West Village, Halloween, to a Bollywood song, taking shots ’til we’re gone,” one section recalls. Or: “Unwelcome in the autumn, persona non grata, I’m the last of the best, I’m your thoughts in the swamp.” The optimism of spring and summer usually calls for brighter tunes. But right now, the nostalgic mood of Bright Eyes — this is the band that brought us the emotionally devastating “First Day of My Life” in 2005, after all — feels apt.

It’s just good to hear Rihanna’s singing voice again. The Barbadian icon has been busy — building a fashion and makeup empire and pursuing philanthropic endeavors; more recently, mobilizing to donate $5 million to fighting the coronavirus. Music has taken a backseat in the interim, with her last album out back in 2017 and only one feature, also in 2017, on N.E.R.D.’s “Lemon,” to tide us over since then. But Canadian rapper and producer PartyNextDoor must have worked some magic; it probably helped that he co-wrote some of her hits like “Work” and “Wild Thoughts.” “Believe It” is off his new album Partymobile, a slinky and unhurried project of dark trap-R&B energy. “Believe It” is one of the bright spots. “First you gotta forgive me,” he says off the top — and with the Rihanna stamp of approval, PartyNextDoor shouldn’t be too worried about falling into listeners’ good graces.

Oliver Malcolm’s debut release was last month’s “Switched Up.” With “Helen,” the 20-year-old Swedish-born Brit artist continues to, well, switch things up. Chopped and produced to within an inch of its life, “Helen” abounds with deepwater echoes, staticky reverb and yelps; listening on headphones, the audio at times switches channels from side to side with an almost disorienting effect. But it’s grounded by Malcolm’s surefooted singing and turns into sweeter harmonic territory. A lot of artists claim genre-blending style, but Malcolm’s is altogether impossible to define. Is it alt-blues? Dark electro-pop? Folk-hip-hop? Does it matter?

Being cooped up at home brings extra time to listen to music, but sometimes you need a break from narratives and lyrics, to just close your eyes and appreciate something not for its story but for its craft. That’s where Tom Misch comes in. The jazz guitarist has teamed up with British drummer Yussef Dayes for a joint instrumental project, What Kinda Music, coming out next month; “Kyiv” is an improvised one-off, recorded in the city of the same name. (Bassist Rocco Palladino is also part of the mix.) That spontaneity and joy makes it all the brighter, with Misch’s singing guitar and Dayes’ sharp percussion given equal time to shine in a song that is sometimes delicate with longing, sometimes juicy with satisfaction, and always a welcome escape. 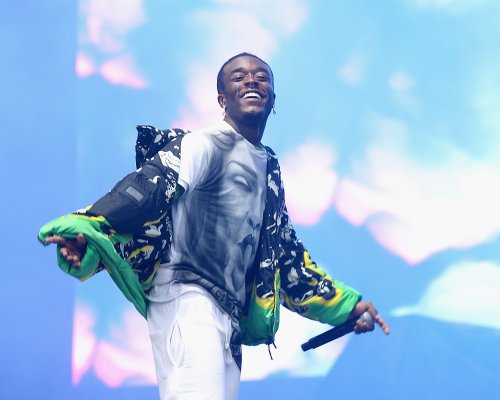 Meet Lil Uzi Vert, Star of the Streaming Era
Next Up: Editor's Pick