The Coronavirus Is Prompting Middle East Regimes to Release Prisoners. But Journalists and Activists Remain Behind Bars

When Turkish writer and economist Mehmet Altan went for a medical check-up on his release from Istanbul’s Silivri prison in 2018, his doctor determined that he was severely anemic. Twenty-one months of incarceration had brought the 67-year-old’s iron levels so low, the medic examining him initially suspected he had sustained a wound and bled out.

Now recuperated, Mehmet is practicing social distancing to mitigate the risk of contracting the novel coronavirus that as of March 27 has killed more than 25,000 people and infected more than half a million globally. But isolating at home is not an option for his brother, the novelist and journalist Ahmet Altan. The brothers were arrested in September 2016 after Ahmet was accused by Turkish authorities of sending subliminal messages through the TV on the eve of a failed coup against Turkey’s President Recep Tayyip Erdogan. While Mehmet was released in 2018 following objections from the European Court of Human Rights, Ahmet remains in jail.

The acclaimed 70-year-old novelist shares a cell six steps long and four steps wide with two other inmates, and lives on the same diet that compromised Mehmet’s health. “I’m extremely worried about Ahmet,” Mehmet tells TIME in the deserted lobby of a hotel in Istanbul’s Beyoglu district. “For him to be held amid the coronavirus outbreak is equivalent to murder in my mind.”

In a bid to reduce the risk of COVID-19 outbreaks, justice ministries in at least four countries across the Middle East and North Africa (MENA) region have commuted jail terms or temporarily released prisoners. The cumulative scale of the release is unprecedented, dwarfing the numbers that escaped Muammar Gaddafi’s prisons during the Libyan revolution, or the militants that Syrian President Bashar Al Assad freed in 2011 to encourage them to fight U.S. forces in Iraq. But in many cases, political prisoners have been excluded from COVID-19 mitigation measures — to the outrage of human rights groups, who condemn the region’s broader move towards the criminalization and repression of free speech and expression.

“Every government should be looking at how they can empty out their prisons and reduce interactions between prisoners, especially those in group cells,” says Amnesty International’s MENA region director Heba Morayef. “The problem for a lot of the more repressive Middle Eastern governments is that they have become so used to using mass incarceration as a way to silence opposition. That actually places those countries more at risk than others.”

Egypt released scores of political prisoners this month, but tens of thousands remain detained for peacefully protesting. Bahrain released around 1,500 prisoners including some 300 political detainees, according to the Bahrain Institute for Rights and Democracy. But the rights group notes that several prominent political prisoners with pre-existing medical conditions remain behind bars. Iran says it has granted temporary release to 85,000 prisoners, including some political detainees. But jailed women’s right activist Nasrin Sotoudeh on March 16 began a hunger strike to demand the release of thousands more who remain incarcerated.

In Syria, which recorded its first coronavirus case on March 23 after weeks of denials from officials in Damasus, President Bashar Al Assad has issued an amnesty expected to provide for the early release of some criminal detainees—although the decree does not specify whether it is part of measures intended to halt the spread of COVID-19. In any case, the amnesty will not apply to unknown numbers of political prisoners in unofficial or secret facilities in the country, says Samer Aldeyaei, CEO and co-founder of the Turkey-based Free Syrian Lawyers Association. “Already, the main reason given by the government for a lot of prison deaths is health issues such as heart attacks,” Aldeyaei tells TIME. “[The pandemic] is a good excuse for the Assad regime to kill more people and say that they just died of the coronavirus.”

On March 23, a group of 40 human rights organizations expressed “grave concern” over the fate of prisoners in Middle East jails that are frequently cramped and unsanitary, and where the health of many detainees is already compromised.

Egypt’s prisons are especially notorious. Egypt does not allow independent inspection of its penitentiaries and has not disclosed how many people it detains, but detention centers remain dangerously overcrowded despite the construction of around 15 new facilities since 2015, according to Human Rights Watch. Inmates have reported having to sleep in rotational shifts on concrete floors and cells with a maximum capacity of 10 can hold up to 40 or 50 detainees.

At facilities such as Cairo’s Tora Maximum Security Prison, known as “the scorpion”, personal hygiene products such as soap, toothbrushes, and shaving kits are not provided to inmates, and basic necessities gifted by relatives have been confiscated. Abject conditions are standard throughout the penal system, where access to running water is not guaranteed, toilets are filthy, and emergency hospital visits require a warden’s permission regardless of the doctor’s opinion. “We have seen a lot of prisoners let die, although their diseases are manageable,” says Amr Magdi, a Middle East and North Africa researcher at Human Rights Watch. While he says the group does not want to give the impression it is calling for the release of violent offenders or those that pose a risk to society, “our position is first to release all those arrested for peacefully exercising their rights. We are talking about tens of thousands in Egypt and in Syria and hundreds in the Gulf countries.”

Some of these more autocratic governments are using the coronavirus as an opportunity, Magdi says, to “seek emergency powers and more normalization of persecuting free speech.” On March 18, Egyptian authorities arrested four prominent women activists as they protested to seek the release of unjustly detained political prisoners. Egypt has also forced a Guardian journalist to leave the country and censured the New York Times bureau chief after they cited a study that questioned the government’s figures on Egypt’s coronavirus cases. Turkey has also arrested at least seven journalists charged with “spreading panic” after they reported on deaths or new cases of coronavirus, according to Reporters Without Borders.

Turkey also announced last week it would expedite a legal amendment to make 100,000 prisoners, or about a third of its incarcerated population, eligible for early release, substituting prison time with alternatives such as house arrest. But the provision does not cover inmates on trial or sentenced for terrorism offenses or crimes against the state. Since 2016, Turkey has either placed in lengthy pretrial detention or sentenced thousands under terrorism charges without evidence they committed violent acts, incited violence, or provided logistical help to outlawed armed groups.

Ahmet Altan is among those ineligible for early release. “They’ve gone too far with my brother,” Mehmet says. “It’s insane that they’re going to let murderers back out on the streets but put the life of a novelist who wrote three articles the government didn’t like at risk from the coronavirus.”

Each morning in jail, he says, he would step into the courtyard behind his cell and shout out that he was not afraid of life; that life should fear him. Inmates in adjoining cells, whom he was forbidden from mixing with, would scream the phrase back to him. “Time slows down in prison but the brain goes in the opposite direction, it starts creating,” he says. “You can never confine a writer. Even if you detain their body, you can’t arrest their mind.” 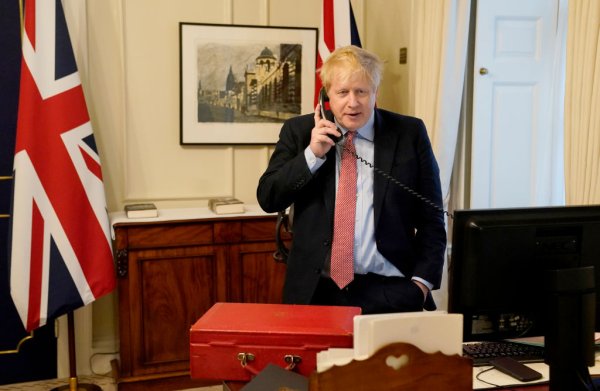 Boris Johnson Tests Positive for Coronavirus
Next Up: Editor's Pick