When New York City closed schools to combat the coronavirus outbreak and ordered remote learning for its more than 1 million students, English teacher Stephanie Paz wasn’t worried about how she would virtually teach her ninth-graders to take notes in the margins of their books or how they would discuss each other’s essays without being in the same room. Her biggest concern was whether they would have the basic technology needed to access their virtual lessons.

Paz teaches at a school in the Bronx, where she says more than half her students did not have a computer or Internet at home when the transition to online learning was announced in mid-March. The school handed out laptops to some students but did not have enough for everyone before remote learning began on March 23, so others got paper learning packets.

She is right to be concerned. As the virus that causes COVID-19 spreads, the nation’s K-12 schools and colleges have been forced to weigh health recommendations against the needs of students, many of whom are caught in the digital divide separating those who have Internet access and those who do not. About 15% of U.S. households with school-age children lack high-speed Internet access, according to a Pew Research Center analysis of 2015 Census Bureau data. Rural communities lag behind urban areas, as do tribal lands, where about a third of people don’t have high-speed Internet, according to the Federal Communications Commission.

Dozens of broadband companies have signed on to the FCC’s Keep Americans Connected pledge for 60 days, agreeing to waive late fees, to refrain from terminating service for homes and small businesses in arrears on bills and to open wi-fi hot spots. Some are also offering free Internet to households with K-12 and college students and to low-income families who are new customers.

But advocates have called on them and on the government to do more. “It still leaves millions of American children disconnected,” Gigi Sohn, a distinguished fellow at the Georgetown Law Institute for Technology Law and Policy, says of the offer. “And by the way, what happens when the 60 days are over?”

Sohn, who worked for the FCC under the Obama Administration and who testified about digital inequality before Congress in January, says in the short term, the FCC and Congress should increase broadband subsidies and make more funds available for schools and libraries to provide Internet-enabled devices and hot spots to low-income students. She says more companies should lift data caps and provide low-cost broadband options.

“This relief cannot come fast enough,” says Sohn. Compounding the coronavirus crisis: many families count on K-12 schools for free or subsidized meals and other social services and rely on colleges for housing and income from work-study jobs.

By late March, 46 states had closed all schools, and at least 54.8 million K-12 students were either trying remote learning or not getting any instruction at all, according to Education Week. Several districts have said they might not reopen this school year.

Roye, a school principal, and sons Mosijah and Iyeoshujah on day one of remote learning
Ruddy Roye for TIME

“It’s something I could not in a million years have imagined having to do,” New York City Mayor Bill de Blasio said on March 15 when he announced the closure of the nation’s largest school district. He acknowledged that many households lacked the technology for digital learning and would suffer economic hardship if working parents had to arrange childcare.

The city’s department of education is working to lend 300,000 Internet-enabled iPads to students in coming weeks, but thousands did not have the technology needed for remote learning when it began.

Alyssa Roye–the principal of a Brooklyn elementary school many of whose students live in public housing–expects it could take weeks for her school’s roughly 100 students to get the equipment they need to fully participate in online learning.

In the days leading up to the remote-learning transition, she called every family with a child in her school to ask if the home had computers and Internet access. Only a handful did. For everyone else, she filled out an online form for them to request an iPad from the department of education.

Her own family’s situation highlights the disparities that exist not only between affluent and low-income school districts but also between schools in the same district, where funding is unevenly distributed and some neighborhoods might benefit from generous parent donations.

Roye’s two sons have a computer and a tablet to use at home, and they attend public schools in New York City that were already well equipped for online learning. Since remote classes began, they have been able to log on at the required times and participate in video chats with their teachers and classmates. The pandemic, she says, has made the digital divide “more glaring than ever.”

In some parts of the country, school officials have avoided or ended online learning because of those disparities. “If that’s not available to all children, we cannot make that available for some,” said William R. Hite Jr., the superintendent of Philadelphia schools, when announcing that students would not be required to submit online assignments.

The Oregon department of education told schools that if they implemented distance learning, it must be accessible to all students, including those without Internet access or computers and those with special-education needs. “You cannot open a ‘brick-and-mortar’ school in Oregon unless it is accessible to every student in their school district. The same rules apply to an online school,” Marc Siegel, spokesperson for the Oregon department of education, said in an email. “Online learning in a school district cannot be implemented with an ‘access for some’ mindset.”

But even in some of the country’s most comfortable suburbs near high-tech urban centers, online equality is elusive. Take Bothell, Wash., an affluent bedroom community near Seattle, which began online learning on March 9 for 23,000 students in the Northshore school district.

For some parents, the transition went smoothly. Grace Jurado borrowed a couple Chromebooks from the school district, which had about 4,000 to lend out, and set them up at her dining-room table. Her three children, in sixth, eighth and 11th grades, worked through their lessons every day for a week. One of her daughters recorded YouTube videos for choir. Her son video-chatted with his friends to figure out how to attack their homework assignments. They all took a break at the end of the day to take their dogs for a walk.

But Amy Amirault found it impossible to give one-on-one help to her 14-year-old son Daniel, who has autism and behavioral challenges, while “running from kid to kid” to help her three younger children follow their online classes.

Northshore superintendent Michelle Reid ultimately ended online learning after five days. In an email to parents, she cited the inequities it had highlighted, in areas from special-education services to childcare to Internet access.

Other districts have raised similar concerns, questioning whether remote learning violates civil rights laws related to educating children with disabilities, who might struggle to use online tools or need more help than a parent can provide. But in guidance issued March 21, U.S. Education Secretary Betsy DeVos said those concerns should not stop schools from offering distance learning during “this time of unprecedented national emergency.”

Jessica King, a single mother of two in Chicago, where schools are closed until April 21, says the disparities will worsen the disadvantages already facing low-income students, whose K-12 opportunities can help or drastically hinder their chances of going on to college. Making just $15 an hour as a teaching assistant in a Catholic school, King does not have a home computer and cannot afford Internet to access the optional online assignments recommended for her 6-year-old son, who has ADHD and a behavioral disorder. “We already deal with the achievement gap,” she says. “But now it’s just like it’s going to widen.”

The problem is not confined to K-12 schools. Hundreds of colleges have transitioned to online learning even though not all students have easy access to wi-fi off campus.

Delaney Anderson, a sophomore at the University of Minnesota, Morris, is one of them. The university has asked students to move out of dorms and stay off campus unless they don’t have a safe place to go, but wi-fi at home on the Fond du Lac reservation is spotty at best. “It’s difficult to play a YouTube video,” Anderson says, “let alone a lecture.”

As they wrestle with remote-learning challenges, many teachers say they’re trying to continue students’ educations and provide a sense of normality, while recognizing the new hurdles children could be facing beyond school–whether their parents were laid off, their younger siblings now need babysitters, or their relatives have contracted the virus.

On her first day teaching remotely in New York City, Paz says her priority was checking in with students, who seemed overwhelmed, before bombarding them with new learning material. She took attendance, shared a video welcoming students to online learning and asked them to complete a journal entry on how they were feeling about their new normal. 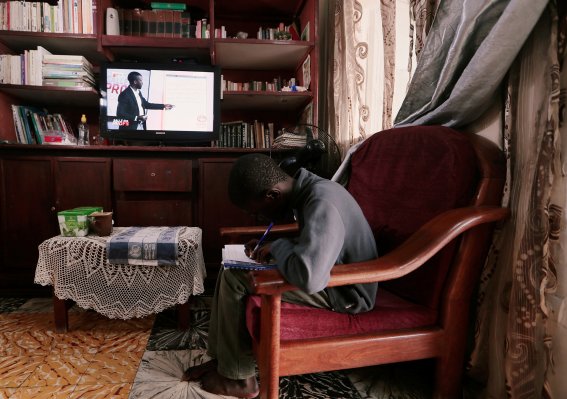 Closing Schools Has Derailed the Lives of Kids All Over the World. Here's How We Can Help Them Keep Learning
Next Up: Editor's Pick