Locusts swarm up from vegetation near Archers Post, north of Nairobi, on Jan. 22
Tony Karumba—AFP/Getty Images
By Aryn Baker

Over the past few months, massive swarms of locusts, one of which occupied an area more than three times the size of New York City, have devoured crops across the Horn of Africa and the Middle East, leaving an estimated 20 million people at risk of famine. The first generation’s eggs are starting to hatch, and now even bigger swarms are forming, threatening countries from the Democratic Republic of Congo to Yemen, Iran, Pakistan and India, “representing an unprecedented threat to food security and livelihoods,” says the U.N.’s Food and Agriculture Organization (FAO).

Desert locusts are usually solitary creatures, but when weather conditions are right, their populations explode. That explosion can create dense swarms that can travel great distances–more than 90 miles in a day–in search of food. Warm weather and unusually heavy rains in the Horn of Africa at the end of 2019 provided the moist soil necessary for hatching eggs. From there, the insects spread rapidly, resulting in one of the worst outbreaks the region has seen in more than 70 years.

A typical swarm, numbering 4 billion to 8 billion locusts, can consume in one day the same amount of food as 3.5 million people. Some swarms have been so thick in parts of Kenya that they have prevented planes from taking off. Governments have resorted to widespread aerial spraying of pesticides when available; in poorer regions, where aircraft are scarce, soldiers battle the swarms with handheld spray pumps, while farmers attempt to drive them away by clanging pots and pans.

The FAO has appealed for $138 million to support affected communities. If the locusts are not stopped before the next generation hatches, the impact could be catastrophic: the FAO estimates that an additional 25 million people across the region could lose their crops and their livelihoods. Scientists in Kenya hope a new computer-assisted tracking program that combines satellite data with weather-mapping software will help predict the swarms’ next destination, buying regional authorities enough time to prepare a response. But coronavirus-related travel restrictions have hindered relief efforts as well as response mechanisms. The locusts have no such travel limitations. 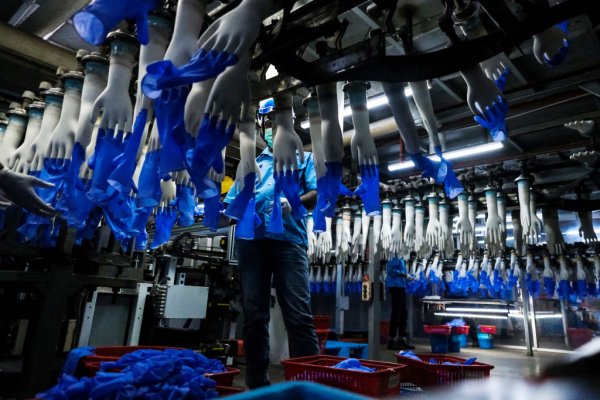 Hospitals Are Running out of Rubber Gloves
Next Up: Editor's Pick