'It’s Like a Silent Visual Message.' How Social Distancing-Friendly 'Bear Hunts' Are Uniting Neighborhoods Amid Coronavirus

A teddy bear in the window of a home in Murfreesboro, Tenn.
Shanna Bonner Groom
By Megan McCluskey

Lions and tigers and teddy bears, oh my!

With families around the world abiding by social distancing guidelines recommended by health experts and Centers for Disease Control and Prevention (CDC) officials to curb the further spread of coronavirus, neighborhood “bear hunts” are becoming all the rage in some areas.

Taking a page from Michael Rosen’s 1989 children’s book We’re Going on a Bear Hunt, members of a number of communities across the globe are placing teddy bears and other stuffed animals in their homes’ windows to create a scavenger hunt-esque activity for kids who are stuck at home. While taking walks or drives around the neighborhood with their parents, kids in participating communities can have some fun by keeping an eye out for any number of stuffed animals that have been put on display at other houses.

Shanna Bonner Groom, who spearheaded the recent bear hunting initiative in the Stewart Springs neighborhood of Murfreesboro, Tenn., tells TIME that she got the word out by posting the idea in her neighborhood’s private Facebook group after seeing it floating around on social media. Now, she says kids are roaming the neighborhood in full safari outfits, binoculars included.

“Within hours, everybody was responding and wanting to join in,” she says. “Everybody’s trying to enjoy this time at home with each other but do social distancing at the same time. So we’re trying to come up with some fun activities.”

A teddy bear in the window of a home in Murfreesboro, Tenn.
Shanna Bonner Groom

Groom says that nearly half the homes in her 200-house neighborhood are now participating in the bear hunt, including ones where no little kids live.

“We have some houses where probably every stuffed animal they own is stuffed into a window,” she says. “Some families have turned it into a safari instead of a bear hunt because you see other animals. People are putting bear prints on their sidewalks with chalk. It’s morphed into more.”

Meanwhile, in the London borough of Lewisham, Daniele Hamamdjian says that bear hunting took off on her block after she shared the idea in her neighborhood’s WhatsApp group.

“We put our teddy bear in the window and the next thing you know, everybody was putting one in their window,” she says. “It was really heartwarming. I got emotional looking at all the pictures coming in because I think people just want to hang onto anything positive, even if it’s a stuffed animal in a window.”

Rhodes Bailey, whose family has been participating in the bear hunt going on in the Hamptons and Old Woodlands neighborhoods of Columbia, S.C., adds that bear hunting has become more than just a game for them.

“It’s a way of communicating with other people while you’re still safe in your family isolation,” he said. “It’s like a silent visual message that families get to send to each other from their windows and it says, ‘We’re all in this together. I’m experiencing what you’re experiencing.'”

Bailey says that he and his wife have turned searching for “bear dens,” as they’ve dubbed the houses with bears, into a learning experience for their 5-year-old daughter.

“We said, ‘We gotta go find as many bears as we can,’ and my wife got a pad and paper so that my daughter could write down the number of bears she’d seen. We used it as a counting game for her,” he said. “Whenever we saw one, everybody would yell ‘There’s a bear! There’s a bear!’ and point at it. You get kind of caught up in the moment but in a really positive way.”

Groom says that the success of bear hunting has inspired her community to organize other social distancing-friendly activities like a chalk-a-walk — “everybody’s going to write inspiring messages and draw pictures on their sidewalk” — a senior walk for the high school seniors — “everyone’s going to come outside and cheer for them” — and a visit from a local food truck — “we’re trying to support our local restaurants so they stay in business.”

“Just because we’re social distancing doesn’t mean we have to socially isolate,” she says. “We’re trying to come together as a community but still be six feet apart.”

A common sentiment amongst the bear hunters seems to be that sharing this activity with their neighbors has made them feel a greater sense of community.

“It extends our family symbolically in a way that we otherwise might not be able to,” Bailey says. “When you go by a bear house, it’s almost like a positive love code that people are sending. You feel like they’re immediately friends. You have the same sense of community and the same sense of love for kids and family.”

Hamamdjian adds that it can be a positive diversion for kids who might not understand why social distancing is important right now.

“How do you explain to a four-year-old that she’s not allowed playdates and her friends aren’t allowed playdates because people are sick? You don’t want to traumatize them and you don’t want them to fear other human beings, but they still have to be cautious,” she says. “So spotting stuffed animals in windows is a really nice distraction from the coronavirus conversation.”

Amid these tough times, Bailey notes that adults and children alike need things like bear hunting to remind them why self-isolating is important.

“It reminds us that we’re part of something bigger than ourselves and we’re all going through this together,” he says. 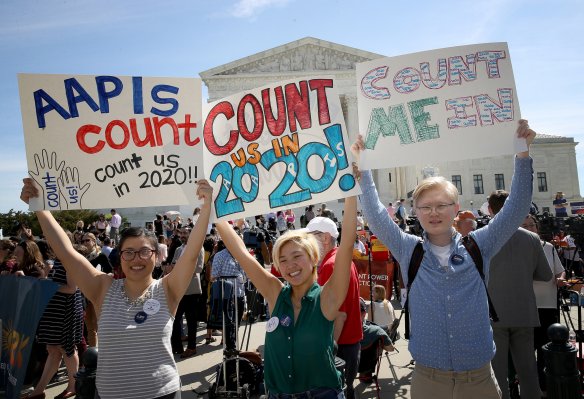 Before the Census, a Question—Who Counts as Asian American?
Next Up: Editor's Pick