U.S. Unemployment Soars by 3.2 Million: How the Coronavirus Jobs Crisis Is Hurting One American City

Visitors are unable to gain access to the Department of Labor due to closures over coronavirus concerns, Wednesday, March 18, 2020, in New York.
John Minchillo—AP
By Justin Worland

Just a few weeks ago, things were looking up for Gabrielle Gregory. The Charlotte, NC resident was settling into life with her one-year-old child and saving to buy a house. Her union had just secured a pay raise for her and her fellow food and beverage employees working at Charlotte Douglas International Airport.

In a matter of days, all of that crumbled. As the nation slowly woke up to the reality of the coronavirus, Gregory lost her job as a cook at HMS Host, one of more than 800 people laid off by the airport food services company in Charlotte. Her son’s daycare closed. Her partner, who also worked at the airport, lost his job as well, leaving the family to eat into savings. “They laid us off out the blue,” she says. “We’re just trying to figure out where our next paycheck is going to come from.”

Gregory’s situation mirrors that of the city she lives in. In recent years, Charlotte has ranked as one of the most attractive cities for new businesses and over the last decade the region has boasted economic growth that has outpaced the rest of the country. But the coronavirus hit has been sharp. Last week, nearly 50,000 people filed for unemployment across the state and stories abound from locals being unable to complete online unemployment forms and waiting on hold for hours to talk to someone at the North Carolina Division of Employment Security. “The unemployment claims system is overloaded,” says MaryBe McMillan, president of the North Carolina AFL-CIO.

Charlotte looks much like the country at large. Figures released on March 26 by the Department of Labor show that nearly 3.3 million people across the country filed for unemployment benefits over the previous week, far exceeding the 665,000 filed at the height of the Great Recession in March 2009. That may be the tip of the iceberg. Unemployment in North Carolina could reach 150,000 in the coming weeks as the country stumbles into a recession, according to Mike Walden, an economist at North Carolina State University. “This is still not as bad as the Great Recession,” he says. “But the uncertainty is greater.”

And it certainly could be as bad—or worse. Experts say nationwide the unemployment rate could peak as high as 30% in the coming weeks as economic activity declines precipitously across the country.

In Charlotte, the early suffering has centered largely on the hospitality industry, which employs 13% of North Carolina’s workforce. Last week, the state ordered restaurants and bars to close for in-person dining. Meanwhile, hotel bookings evaporated and flights to the local airport, a significant hub for American Airlines, were cancelled, delivering a big hit to the city’s $7-billion tourism sector.

“This has been the hardest week of my professional career,” says Lynn Minges, CEO of the North Carolina Restaurant & Lodging Association. “We’ve known about coronavirus for quite some time, but I don’t think any of expected the tsunami that has come upon us.”

The challenges have led to a flurry of innovative efforts to keep cash flowing. Restaurants have scrambled to offer innovative take-out offerings, using social media and email blasts to customers to ask them for their support. At the Dilworth Grille, just outside Charlotte’s city center, a sign was posted in all caps telling passersby to “support local” and “order takeout.” The list of upcoming live music events on the Facebook page of Music Everywhere, an initiative to support the city’s local music industry, has been replaced by a list of local livestreams that accept donations and optional contributions. “A lot of people are innovating right now in our backyard,” says Tariq Bokhari, a member of Charlotte’s city council.

Many in the city have looked to some of the big corporations headquartered in the region for support. A long list of Charlotte-headquartered companies—including Lowe’s, Bank of America and Lending Tree—donated $1 million each to meet the needs of people hurt by coronavirus.

Even some of the biggest companies in the region face tough times. Charlotte-based Honeywell, for instance, told employees that they would be required to take two weeks of unpaid leave amid mounting financial challenges. The company also cut pay for executives. Nearly two thirds of business leaders surveyed by the Charlotte Regional Business Alliance said they were concerned about the impact of the coronavirus pandemic on sales and more than 20% said their business could not last more than a month with no new sales. “The biggest takeaway right now is the uncertainty, regardless of how big you are, how small you are, what industry you’re in,” says Janet LaBar, CEO of the Alliance. “We’re going to see businesses downsizing.”

All of this is of little comfort to local workers who are just trying to put food on the table. And, while the state government has loosened rules on who qualifies for unemployment, North Carolina ranks among the least unionized states in the U.S. and has been criticized for poor worker protection laws. “What this crisis has done is expose the real holes in our safety net,” says McMillan.

Gregory, like Charlotte’s business leaders, says one of the biggest challenges is uncertainty. The food service worker says her company’s communications about the layoffs were unclear, and she doesn’t know if she might be able to return to her job if things pick back up. Whether looking to her employer or to government officials, Gregory says she just wants more information so she can plan.

“There needs to be more things in place going forward, like how we really gonna attack this issue?” she says. “At this time, I don’t know if it’s short term or long term.” 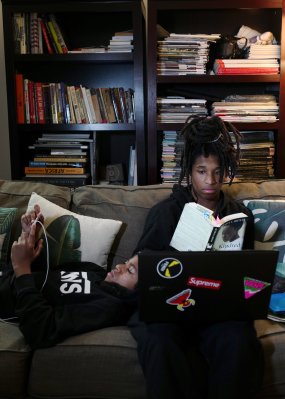 The Achievement Gap Is 'More Glaring Than Ever' for Students Dealing With School Closures
Next Up: Editor's Pick